If you’ve been scouring the coverage of Apple’s new MacBook, you’ll probably already know this. But I did an informal poll and a lot of folks did not, so I thought I’d mention it.

The new trackpad does not move, at all.

When you ‘click’ it, it ‘clicks’, but it doesn’t actually click. There is an audible ‘click’ sound (that’s what the silly picture below is, me listening) and it does in fact feel like it clicks, but that is merely an illusion.

There is a set of vibrating motors underneath that provides ‘force feedback’, also known as haptics in some applications. This feedback fools your finger into believing that you’ve pressed down on a hinged button, the way your current trackpad works. This feedback relies on phenomenon called lateral force fields (LFFs), which can cause humans to experience vibrations as haptic ‘textures’. This can give you the feel of a ‘clickable’ surface or even depth. The Force Touch feature of the new trackpad allows you to press ‘deeper’, giving you additional levels of tapping feedback. The effect is done so well that you actually feel like you’re pressing down deeper into a trackpad that still isn’t moving at all. It’s so good it’s eerie. 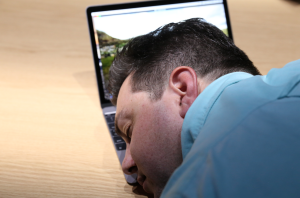 If you’re worried about losing your ‘click’, don’t worry. In my opinion, it’s completely indistinguishable from a physical press. And there are accessibility benefits here because there is an adjustable sensitivity. Playing with that led to a distinct difference in the pressure needed to trigger a click. People with muscular atrophy or conditions that cause pain on certain finger movements will likely benefit.

“The trackpad sounds great for people with repetitive stress injury,” says our own Catherine Shu. “I had carpal tunnel syndrome a while back and tapping the trackpad with the side of my thumb made the rest of my fingers go tingly.”

Some of the earliest research into using LFFs to create haptic feedback was done by Margaret Minsky, and summarized in a 1995 dissertation called “Computational haptics : the Sandpaper system for synthesizing texture for a force-feedback display“. If you browse it, you could be getting a peek at the future of Apple’s screen technology — Minsky actually investigated the use of this method to create a display that could simulate textures.

A WSJ report from earlier today says that Apple is integrating its Force Touch technology into future iPhones — which would detect how hard a screen is pressed. Tap confirmation, contextual clicking, deeper interaction models and maybe even hover states await us. Color me 100% not shocked. The report doesn’t mention whether the feedback is also coming, but they seem intertwined to me, we’ll see. If this clever vibrating tech can make a stationary piece of glass on your MacBook feel like it’s actually clicking, it could do the same for your iPhone.

Imagine, stickers that tickle you, or a Facebook poke that actually pokes. It’s a brave new world.

Updated to clarify details from the WSJ report