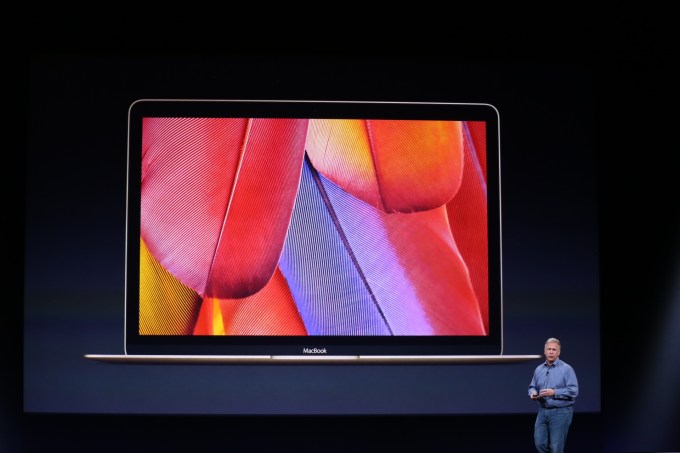 At its event in San Francisco’s Yerba Buena Center, Apple today confirmed a long-running rumor that resurfaced back in January: The next major iteration of the MacBook will be a 12-inch Retina laptop that’s thinner and lighter than Apple’s previous trend-setting design.

The laptop Apple revealed on-stage today mostly lines up with the rumors reported earlier this year. The laptop has a smaller bezel around its screen and its keyboard reaches both edges of the base. The trackpad doesn’t click in the traditional sense — instead, the Taptic engine that provides touch feedback on the Apple Watch simulates the sensation of clicking. You can also now use the push harder than the usual tap and have it count as a separate gesture, just like the Watch.

Just as the original MacBook Air ushered in a new way of thinking about expansion and media by cutting out legacy ports and the DVD drive, the new 12-inch MacBook Air is designed for a world where your primary computing device is your smartphone, not your laptop.

Besides the headphone jack, there’s only one port on the new MacBook. It’s the new reversible USB-C connector, which can charge the laptop, send video to an external display, and carry data at USB 3 rates. Moving to this new connector enabled Apple to make its laptop even thinner, though it necessitates connecting peripherals via an external USB hub (we can probably expect a new Apple display with the ability to power/connect accessories to the new Air at some point in the next year or two).

If you need to share documents or photos, Apple expects most users will be happy sending things around over Wi-Fi and Bluetooth using iCloud and AirDrop.

The new laptop weighs just 2 pounds and is 13.1 mm thick, 24 percent thinner than the 11-inch MacBook Air. The 2304 by 1440 display is technically Retina-quality, a first for the Air line. The processor is a Core M, one of Intel’s ultra-low-power chips that’s been included on some recent hybrid tablet-laptop devices from Windows OEMs. Apple is promising “all-day battery,” with 9 hours of web or 10 hours of HD video.

The new MacBook will launch April 10 for $1,299, and will include 8 GB of RAM and a 256 GB SSD in the entry-level model. As with the iPad and iPhone lines, the new Mac will come in Silver, Space Gray and Gold versions: