“Here I am just sitting in this house and I’m able to predict a cure to measles,” co-founder of Atomwise Alex Levy tells me over the phone from his apartment in Mountain View, Calif.

Atomwise, a health tech startup in the current Y Combinator batch, has launched more than a dozen projects in the last year to find cures for both common and orphan diseases – diseases that would otherwise be too expensive and time-intensive to tackle. It’s working with IBM to find a cure to Ebola and with Dalhousie University in Canada to search for a measles treatment. Levy says the startup went through 8.2 million compounds to find potential cures for multiple sclerosis in a matter of days.

It takes an average of 12 years and about $2.9 billion to put new drugs on the market. On top of that, very few experimental drugs ever see the medicine cabinet (1 in every 5,000 drugs moves on to human trials).

We can even consider hypothetical drugs that don’t even exist yet. Alex Levy, co-founder of Atomwise


Atomwise predicts potential drug cures with the use of supercomputers, artificial intelligence and a specialized algorithm that runs through millions of molecular structures, potentially reducing the cost and time involved in making new drug discoveries.

“It’s like having a virtual super intelligent brain that can analyze millions of molecules and potential interactions in days instead of years,” Levy says. The virtual drug-discovery platform is based on the science of deep learning neural networks. It essentially teaches itself by studying millions of data points about how drugs have worked in the past.

Atomwise uses the same sort of deep learning technology as Google’s DeepMind and applies it to a new field that could have a huge impact. If it works, the technology could potentially find drugs to cure future diseases and save millions of lives before we even know what those diseases look like.

“We can even consider hypothetical drugs that don’t even exist yet,” says Levy. “Atomwise can look at weaknesses on those new viruses and rapidly identify hypothetical treatments to test.”

It can also source through compounds in currently available drugs on the market to find potential cures for diseases already out there. Atomwise is going through the molecular structures of already available, FDA-approved medicines on the market to see if they might be a candidate against Ebola. 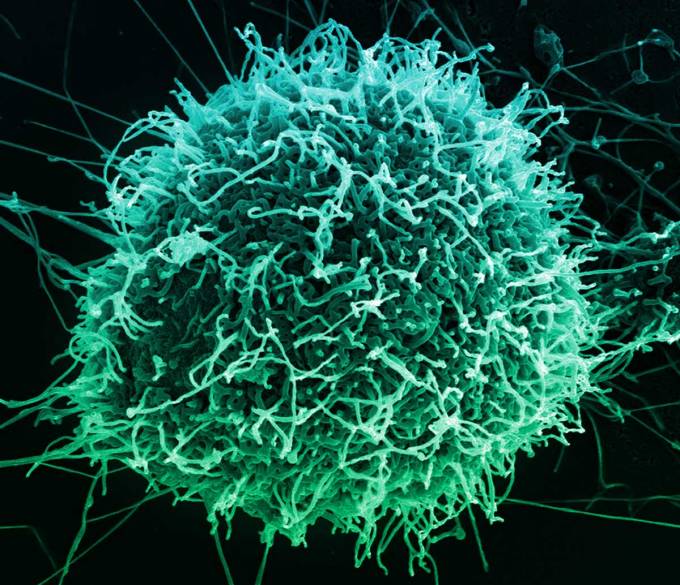 Ebola replicating on a cell.

This could also help with what many in the medical community have warned will be a catastrophic antibiotic resistance crisis in the next 20 years. Widespread use of antibiotics and antibacterial products have helped diseases like pneumonia become resistant to the drugs. Atomwise is hoping the use of these super computers can come up with a solution before it becomes a crisis.

We’ll still need to wait for the pre-clinical trials and FDA approvals before anything hits the shelf, but the collective data is able to whittle down millions of possibilities on the molecular level and then suggest things that might possibly work. It gives researchers a better idea of which compounds would make better pre-clinical trial candidates.

It’s still early days, and Atomwise hasn’t seen any of the drugs go to human trials just yet, but the application to medicine is an interesting one for Atomwise.

“You still have to test but you take out all the guesswork before you get started,” says Levy.