Over the course of investigating the Apple Watch, I’ve spoken to several sources who have spent extended time with it.

There are a lot of interesting details, some of which we’ll get into. But, by far, the biggest recurring theme is how little you use your iPhone once you have one.

After these discussions, it seems certain that the Apple Watch will shortly be the primary way you access your iPhone during the day.

People that have worn the Watch say that they take their phones out of their pockets far, far less than they used to. A simple tap to reply or glance on the wrist or dictation is a massively different interaction model than pulling out an iPhone, unlocking it and being pulled into its merciless vortex of attention suck.

One user told me that they nearly “stopped” using their phone during the day; they used to have it out and now they don’t, period. That’s insane when you think about how much the blue glow of smartphone screens has dominated our social interactions over the past decade.

There are a few ways Apple is making this happen.

Stay On The Watch

The Watch will have more context about you than a phone alone ever could. For example, it takes your heart rate periodically, providing you with a last-checked time, which could offer major benefits to health applications and other contextual processes.

The notifications are also different at an elemental level than the ones on your phone — both on the developer and user side of things. These are seen right away rather than at some point. You act on them quickly and they don’t stack up like they do on the phone.

There is that added bit of context because you know exactly when they got it, which means that time-sensitive notifications like those that recommend a precise establishment or ping you during a live event become much more germane.

One user told me that they nearly “stopped” using their phone during the day; they used to have it out and now they don’t, period.

If you’re a developer who deals with notifications you know how powerful that could be.

And, as a user, those notifications activate as part of the app right on the Watch home screen, allowing you to act on them without any sort of sliding, unlocking or other junk. These are immediate, actionable items that you can access without the obligations inherent in taking out your phone.

Because the screen of the Watch is so small, there has been a lot of talk about its use as a “notification window.” Yes, notifications are a powerful part of it, but the mechanics of the device actually support much, much more than that.

People that have used the Watch extensively say that the touch targets are actually very precise and sensitive. This means that you will be able to trigger smaller buttons and interactive elements fairly easily. (As a note, the unusual clustered home screen layout means that the “hot” spots for apps will be at the edges, rather than the center. This way you can jet out to the edge of a group in any direction and find an app. Your “bottom row” will become your “outer ring.”)

The display is also very sharp and easily readable from your wrist. When your attention is on the Watch, you’re going to want to do more there than you think, rather than having to move over to your phone. This means that you may find yourself reading short articles and other content on your wrist. This could affect the way that publishers want to build their apps. They shouldn’t just be redirection machines that punt people to their phones; there is an opportunity to give people what they need now and let them get back to what they’re doing.

Battery life is also much better than some previous reports, so Apple has been working on it. In a normal day of on-and-off use, the battery usually ends up at around 25 percent, which means that you should be able to make it through a full day. It only takes around two hours to charge fully.

The digital crown is an important part of the navigation process and has been matched precisely to the scroll velocity. This should give a sense of context that helps when viewing on the smaller screen, as you’re not chasing the scroll with your finger. It’s also changed physically since the Watch was first shown off, and now has more friction for a weightier, higher-end feel.

Pressing and holding the crown activates Siri, which sources have said works incredibly well on the Watch. It can be used for labeling, directions, commands executed by the phone and more. If — and this is a big IF as Siri has been hit and miss over the years for me — if it is truly a “say it and forget it” experience, the confidence in using your wrist as a “commander” for your life is expansive.

So, let’s discuss. Does it kind of suck that we have to buy a $500 accessory to return to a normal life? Sure. But such is the deal.

You’re not going to give up your smartphone. That Faustian bargain has already been struck. We get access to an entire universe of information and communication and we sacrifice our bloody attention on its smooth glass altar. 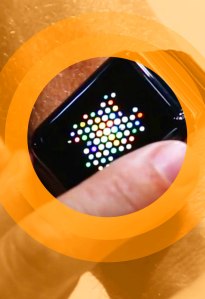 But the Apple Watch can return some of that attention and, more importantly, time back to you.

If you argue the Watch isn’t going to sell or do well, it’s worth pointing out that there are very, very, very few products that allow you to hand someone cash and be given back TIME.

This will be the Apple Watch metric to track: time saved.

We’re getting a tad metaphysical here, but really the only resource we all have exactly in common is time. Kings don’t have more of it than peasants. Not everyone will be able to afford an Apple Watch (or even an iPhone), but if they’re in an economic situation where that’s feasible then they’re also in the situation where they are probably willing to trade money for time.

And that is the target market of the Apple Watch. Not “rich people” (though there’s a model specially for them), not “tech geeks” and not “Apple fanatics.” It’s people who want more time, and that is a very large target.

This, for some reason, is the thing that Apple has had a hard time articulating. This is the primary use case of the Watch. It’s not just that it’s a “notification center”; it’s that it allows you to act without any additional distraction.

For now, the iPhone is a dominant business for Apple and the smartphone is a domineering force in our daily lives. But one day something will come along to destroy it. And, as Apple has expressed many times in the past, it is willing to be the one that finds that thing. With the Apple Watch, we could be seeing the beginnings of that process.

Perhaps someday, the Apple Watch could do the impossible: it could make you stop using your phone.