As I walked around Mobile World Congress this week, I couldn’t help but notice some big trends. The Internet of Things was certainly top of mind. Vendors are merging mobile into your biggest mobile device: your car. Smartwatches are a growing force, but what really caught my attention is that we are teetering on the edge of mass market virtual reality.

TechCrunch’s John Biggs got a look at the HTC Vive this week, a joint venture between HTC and Valve, and to say he was pumped would be an understatement.

“When I say I was impressed, amused, and excited, trust me. This was one of the best things I’ve seen in a long time and I am thrilled that I got to be part of it.”

That’s high praise from a man who isn’t easily impressed, but HTC wasn’t alone in trying to present virtual reality at this year’s conference. Everywhere you looked in the real world, people were wearing virtual reality glasses.

Here’s the thing. We are early in the virtual reality game. Much like the vast array of smart watches I saw in a variety of shapes and sizes, it is early days for VR equipment. They remain big and clunky and look kind of funky — but they are getting closer.

Even the HTC product was huge, and as Biggs described it, very much in the prototype stage.

When I saw Oculus Rift CEO Brendan Iribe speaking on stage at Web Summit last November, he talked about needing to refine the hardware design. He understood the equipment is still too big today, and as such it will only appeal to a small sub-section of geeks.

He said his company’s goal was to reduce the size of the hardware to a pair of designer sunglasses — and with each passing iteration the company has gotten closer to that goal. 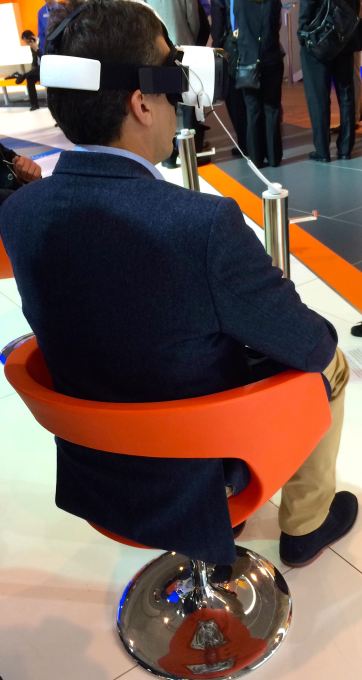 While I couldn’t demo the HTC tool, what I saw and experienced this week were big goggles that you pulled over your eyes to be immersed in a virtual world. When I tried the virtual home tour at the AT&T Connected City, I sat in a chair and felt myself immersed in a graphical home full of facts and figures. I was able to control my actions by staring at a window to enter a room or the floor to exit, but I found the whole thing a bit slow to react and not quite what I would have liked, certainly nothing like the experience Biggs described when he tried on the HTC product.

I tried another VR tour at Accenture’s booth one afternoon. This one involved drinking beer in real life and taking a tour of the Spanish Brewer’s Damm brewery building in the virtual world. You moved through the world by staring at arrows on the ground. One thing was clear, I did immediately feel transported to another place, so from that perspective, the software and graphics side is definitely getting there.

But the hardware still needs work for this market to mature. Like everything else in mobile over time, it will grow smaller, faster and cheaper, and as it does it will enter the mainstream as a consumer device.

It certainly has a future in immersive games, but Iribe also saw it as a way to hold virtual business meetings where everyone could sit in the same room in the form of avatars of course. It could make it possible to meet “in person” without traveling across the world to do it. Developers could create business-friendly tools like screen sharing apps and virtual whiteboards.

While this all feels a bit like future games, it’s getting closer. As Biggs wrote in his piece:

“The content made the demo and Valve’s games were, in a word, amazing. They were funny, fun, and perfectly calibrated to excite the senses and incite wonder. It was interactive umami – the hardware, the software, the graphics, and the writing were all mixed together to create something that I have never seen.”

That suggests we are very close, closer than I believed, but we need to move beyond the prototype stage to the point that the hardware manufacturers refine the design and get this to market.

It seems that we’re living on the edge of virtual worlds becoming a reality.