When I first covered the company back in 2012, the pitch was pretty straightforward — it provided customizable search tools that didn’t suck to sites like TechCrunch.

On the other hand, online publishers might not be the most lucrative customer base, so while co-founders Matt Riley and Quin Hoxie told me they still support publishers (and we still use Swiftype at TechCrunch), they’ve also expanded into other areas, particularly knowledge bases (basically, FAQs and customer support sites) and e-commerce.

As examples of how the company’s technology can deliver a better experience in both areas, Riley pointed to Swiftype’s semantic understanding of searches — in e-commerce, it can be important to understand the difference between a “blue dress” and “dress shoes,” and with a knowledge base, it’s important not to get confused when someone enters a long, complicated question as their query. (The company also added live analytics last year.) 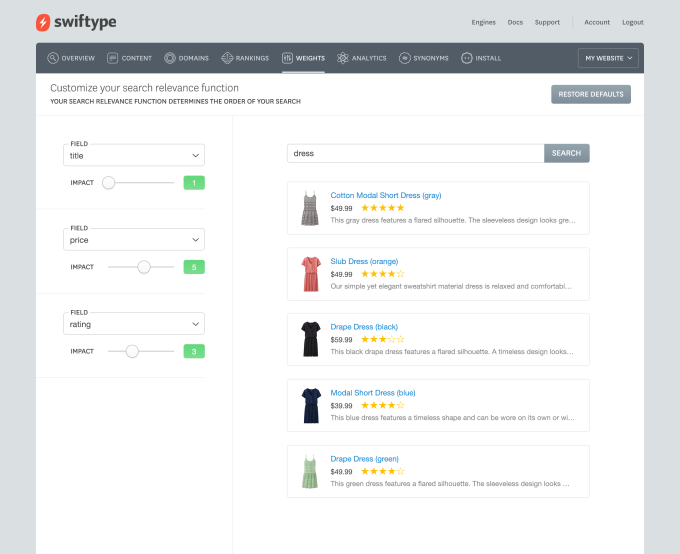 Swiftype says it’s now used by hundreds of thousands of websites and apps, with customers ranging from Qualcomm and Dr. Pepper to Twitch and CloudFlare.

The Series B was led by New Enterprise Associates, which also led the Series A. NEA’s Chetan Puttagunta, who was recently promoted to partner, will join the firm’s John Sakoda — as well as Hoxie and Riley — on the Swiftype board.

Asked why they seem to be doubling down on their relationship with NEA rather than bringing on new investors, Riley said, “We feel like they’re going to be long-term partners. … Chetan works really hard and he’s been incredibly helpful to both Quin and me, helping to guide us through what we’re learning about running a business.”

Swiftype has now raised more than $20 million in funding. Its investors include CrunchFund (which is backed by TechCrunch-owner AOL and, like TechCrunch, was founded by Michael Arrington).

You can read more in Swiftype’s blog post about the funding.