Those looking to learn the piano have a new option in the form of Keys, a smart keyboard you can connect to your phone to pick up new songs or to your computer to make your own.

Keys offers 24 keys in an aluminum body about the size of a 13-inch laptop. Connecting the keyboard to your iPhone lets you use the Keys app, which teaches you to play with an interface resembling Guitar Hero or Rock Band.

Colored dots scroll down and hit keys at the bottom of the screen, as LEDs embedded in the keys light up in the same color so you can quickly pick up the patterns for new songs. When you become more confident, you can move from the simplified interface to one resembling the layout of sheet music. It’s a similar mechanic to the gTar, which Opho launched at Disrupt 2012 as Incident Technologies. When you want to learn more songs, the app has public domain classics you can download for free as well as a library of more recent, recognizable tracks you can download for $1 each. 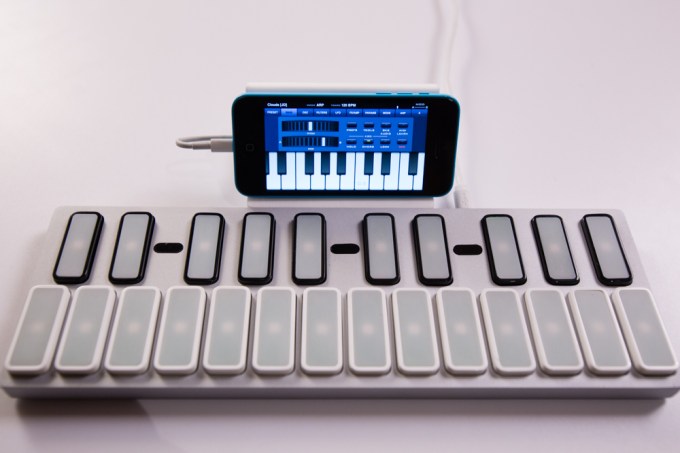 Opho simplified the keyboard by stripping away most of the instrument. If you want to play different octaves, proximity sensors let you swipe left and right to move up and down the keyboard.

If you prefer having more keys, you can add another Keys unit to either side. Opho built its own wireless technology for Keys, which allows them to add an arbitrary number of instruments or controls, like a set of knobs for quickly adjusting various settings in electronic music apps. 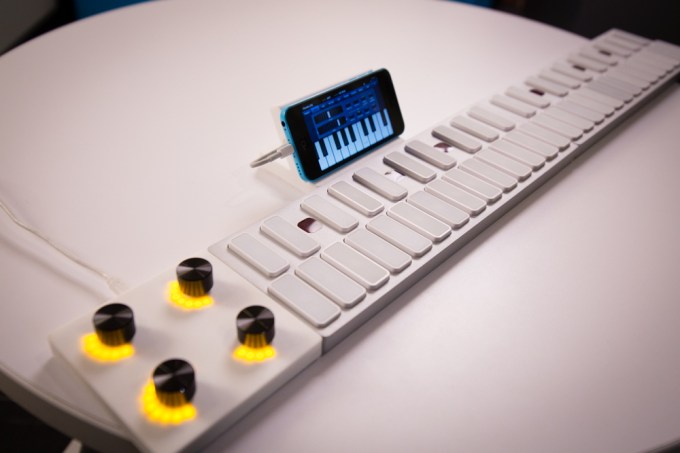 The Keys units we used for the video demo above all required external power, but Opho CEO Idan Beck says approximately half of Keys’ height comes from the massive batteries the team packed in, which give each unit several days of battery life.

At $99, Keys isn’t just a decent way to learn a new instrument — it’s also an affordable MIDI device you can easily drop into a backpack with your laptop for music production and performances. While setting up for our demo, Beck showed me a video of a DJ using Keys’s proximity sensor to modulate the song he was playing, while adding notes by playing on the other end of the keyboard. Expect more add-ons for these users as Opho releases new modules for Keys, like turn-tables and sliders.

It’s a tricky game to market to both audiences, as you don’t want the professionals who could take advantage of it thinking it’s an underpowered device for beginners, and you don’t want to scare those beginners off by focusing too much on its MIDI uses. Beck says they’re going to try to strike a balance between those approaches by getting well-known artists to use it in promotional videos in ways that make it seem impressive but approachable.