A company called Ambit Networks has just launched its own take on wearables aimed at children with the debut of the AmbyGear Smart Watch, now live on crowdfunding site Indiegogo. The new watch includes built-in GPS and alerts for parents as well as educational content and games for kids. It’s initially available for $99, and will ship later this summer.

Specifically, AmbyGear’s watch is aimed at children ages 3 to 11 – when they’re too young to have a smartphone of their own, but at an age where they may either wander off, or still need to be in touch with their parents somehow.

Today, there are a number of competitors building smartwatches for children, including devices like Flip Technologies‘ FiLIP 2, VTech’s Kidizoom, the Burg 31, B-On’s Amigo watch, the Jumpy, and many more. But in some cases, companies in this space are focused on building watches that address parents’ needs to monitor and track their children, without offering things that the kids themselves might enjoy.

With AmbyGear, however, the watch is a combination of a kid-tracker, parent-child communication device, and a source of mobile games for kids.

Using the watch’s built-in GPS, parents can locate their kids, as is typical with kids’ smartwatches, but in AmbyGear’s case, the reverse of that feature is also available – kids can use a “Finder” app to locate their parents in the event they become lost or just feel unsafe. Parents can also configure boundary alerts, which let them be notified if their child moves outside a specific geo-fenced area.

In addition, there’s a unique kid-friendly texting function that lets parents send short messages to kids like “Time to go home!” which kids can respond to with just a tap in order to say “OK.” 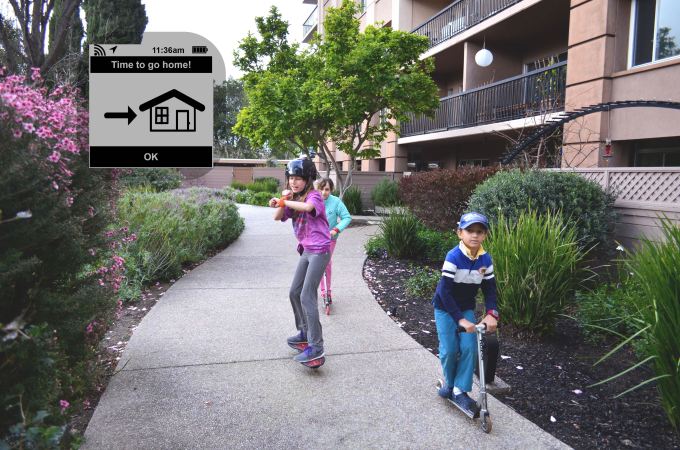 Parents are able to communicate and track their kids using the accompanying AmbyGear mobile app, which lets them configure the watch with new games and apps, as well as receive geo-fence alerts and “tamper alerts” which inform parents if the watch is being removed, and more.

Another feature which will likely appeal to parents who have been struggling with the decision as to whether or not to provide their older elementary or even middle school-aged child with a smartphone is the included calendar app. Instead of worrying if the child is remembering to make it their after-school activities, or getting frustrated because the child forgets to come inside in time for dinner, the watch instead can alert kids to the day’s upcoming events. This feature also works with AmbyGear’s built-in reward system, so parents can use the watch to encourage good behavior. 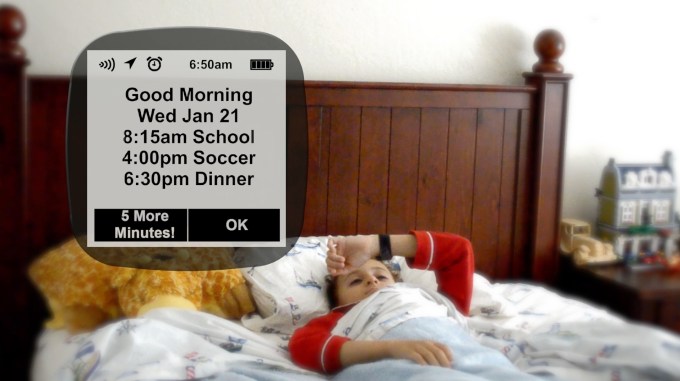 The reward system is a key feature of this watch, as it allows kids to collect points daily for their activities which can then be traded in for rewards set by parents, like extra allowance dollars, toys, trips or other small or large prizes.

Kids can enjoy the watch too, by accessing a range of educational games which parents select based on the child’s age. (The company notes it will open this up to third-party developers.) And the watch includes other educational content focused on teaching “life lessons” – like encouraging kindness, responsibility, physical activity, commitment, and more. For example, a Geo Caching (treasure hunt) app encourages kids to explore the outdoors while having fun finding hidden items. 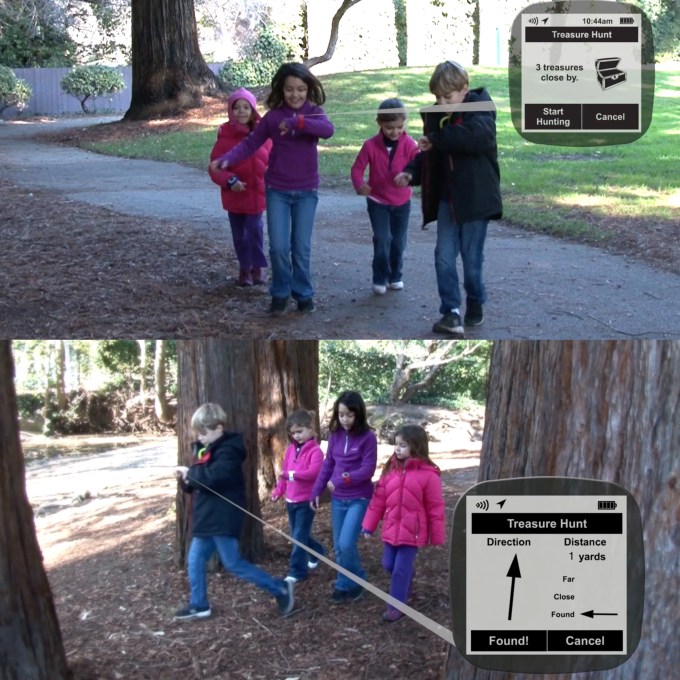 The watch itself offers a choice of brightly colored red, blue, green or white wristbands, a Sharp ultra low-power display, Bluetooth (up to 250 yards) and Wi-Fi connectivity (up to 500 yards), GPS with 33 tracking channels, a 3-axis accelerometer, a magnetometer, 4 colored LEDs, a Qi wireless charger and USB cord, and a 20dBm RF power amp. The display is easy to read in sunlight, and because of its low power consumption, allows the watch to have up to 7 days of battery life in between charges. The AmbyGear is also waterproof and shock resistant, the company notes.

Ambit Networks founder and CEO Patrick Muggler, a parent himself, experienced the problems of tracking down missing kids firsthand, having once lost his daughter in Home Depot for several long minutes. And a few years later, his wife lost their son while on a bike ride. “Over 1,000 parents go through similar situations every day in the U.S.,” he says, noting that this is what the AmbyGear watch aims to solve.

Prior to Ambit Networks, Muggler spent 15 years in the semiconductor and electronic business in roles ranging from IC design to application support, business development, and product marketing at companies including Texas Instruments, Maxim Integrated, Intersil and Power-One. During this time, he help companies including Nokia, Apple, Sony, Samsung, LG, HTC, and Sharp design their audio backend in their mobile phones, TVs and other consumer electronics.

Ambit Networks co-founder and COO Arun Sharma, meanwhile, has 14 years experience in the semiconductor industry, also in IC design and product line management at companies such as Texas Instrument, Conexant and Audience.

The $99 device will eventually retail for $129, but doesn’t require a monthly fee. The watches are expected to ship this summer.

The Indiegogo campaign is hoping to raise another $50,000 to bring the watches to production, and comes on top of a small $110,000 round of friends and family funding.