Twitter’s Digits, a developer-facing service launched last fall that offers a way to integrate a simpler, password-free login option into third-party mobile applications, has been expanded today with a pair of new features, including a friend finding function and two-step verification. While already Digits was offering a more secure way for users to log into apps by using their phone number instead of a username and password combination, which can be more easily hacked, the option to include two-step verification provides another layer of security for those who want to take advantage of the newly added feature.

Explains Twitter in a blog post announcing the news, after a developer implements Digits, their app’s users can visit Digits.com to set up a simple code that will be prompted on future logins and sign-ups for all Digits-powered apps. 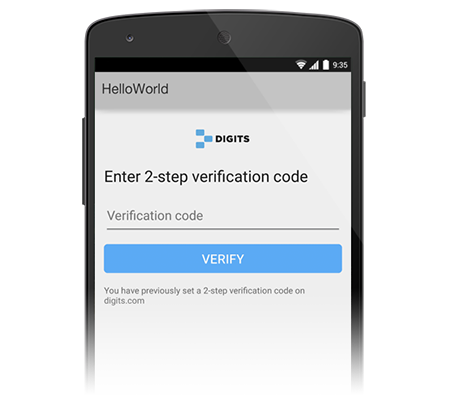 However, at least according to Twitter’s Digits homepage, that list of supported apps has not expanded much beyond the service’s debut back in October. At the time, Twitter noted that apps including Fitstar, Resy and OneFootball were among the first to implement the new system. Today, that list has expanded to include a couple of high-profile names like Rdio, but it’s still a small crowd. Twitter won’t confirm how many developers are currently live with Digits or even testing the option, given the service’s young age.

The other new feature rolling out to Digits is a friend-finding option. It allows app developers to create a social graph in their apps by uploading a user’s address book to help users find others they know already using the same application, or be notified when their friends join. Twitter points out, too, that a friend-finding function can help to personalize the user experience in an application, as well – for example, by showing things like what your friends bought or what level they achieved in a game or other competitive app.