With the most-funded project ever (with 24 days left to go in its campaign!), Pebble has managed to bring in nearly 60,000 backers to support their unique approach to the smartwatch concept.

As other manufacturers look to bring devices for your wrist to market bearing marked similarity to their phones, Pebble has gone in the other direction, focusing on its seven-day battery life and a simple interface. Last week, we stopped by Pebble’s Menlo Park office to chat with CEO Eric Migicovsky about the logic that went into the new watch. 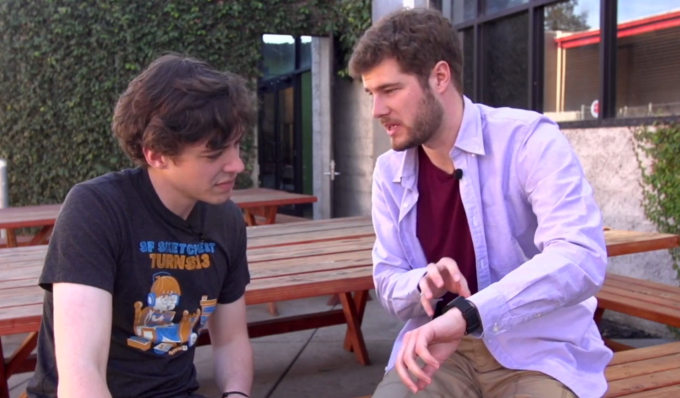 While Pebble’s new Time interface has plenty of slick animations between each screen, the fundamentals are simple — one button shows you things in the past, another button shows things you’re going to have to deal with soon, and one shows you pins that let you quickly leave information for yourself in the timeline.

Migicovsky told me that if people want a full app experience, their phone is still just a second away in their pocket, so there’s no need to provide overlapping functions. This thinking lets them focus on showing things efficiently, both in terms of interaction time and the hit to your battery.

Some found it odd that a company that’s already sold a million watches came back to Kickstarter, a platform traditionally seen as useful for first-time startups or small projects. If its fans are so loyal, why not just launch pre-sales on its own site? It could cut out Kickstarter’s fees entirely. Migicovsky says that the Kickstarter backers are the ones who care the most, so it wanted to reward their years of support.

The announcement of the Pebble Time Steel this morning made it clear that there was a strategic reason to go with Kickstarter beyond reaching a particular audience. Pebble didn’t have to run a separate campaign for the second-generation Steel, and those who had already committed to a Time could upgrade their order without losing their spot in line. This multi-week release schedule let Pebble maintain coverage going into its second week, and doing it on Kickstarter let it pull off the schedule without giving away its strategy or requiring a custom backend that could deal with changing orders.