Since smartphones put a decent camera in nearly everyone’s pocket, it’s become the norm to take pictures with friends when going out, because you might as well capture the memory.

In some settings, that might mean asking a stranger to take a photo, stretching your arm out to capture several people at once or (gasp!) using a selfie stick. If you’re at a corporate event, you might even shove a few friends into an old-school photo booth, taking a few silly pictures you can share later on social media.

Podo is looking to combine those experiences with its tiny camera, launching on Kickstarter today. While it looks to be about the size of a GoPro (you can easily fit it in a pocket or purse), it’s got a pivoting, sticky base that gives away its true purpose: turning any surface into a dedicated photo zone.

Capable of attaching and re-attaching to a variety of surface materials — we tried wood, glass, and cement at hardware incubator Highway1 — Podo’s camera lets you provide the photo booth experience at a moment’s notice. You stick the camera to a wall (or light, or some other piece of furniture), open a dedicated app on your phone that connects to the camera over Bluetooth, and frame your shot.

After setting a timer to give yourself a moment to compose a good face for the picture, a series of LEDs around the lens indicate when it’s actually shooting the photo. From there, the photo is sent straight to your phone, either instantly at lower quality or over a few seconds if you want to max out the camera’s 8-megapixel sensor. 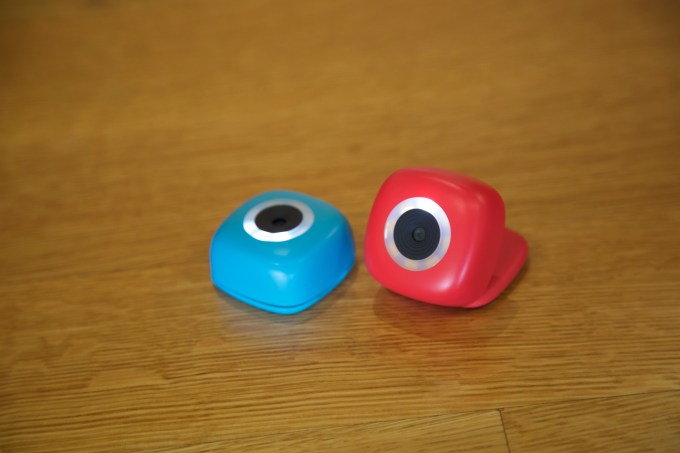 Though it’s capable of taking 720p video, I don’t expect Podo to get much use as an action camera. Its two-hour battery life and 4GB of storage make it more useful for individual social outings, and while it feels solidly built, I wouldn’t want to take it to a music festival or skiing.

That’s okay, because the price comes in below the cheapest action cameras (excluding Xiaomi). Kickstarter early birds can pick one up for $79, with the price rising to $89 for other backers and $99 for those who get one via retail this fall.

Podo President Eddie Lee says the camera is for people who go out and post a ton of pictures with their friends to Instagram. Between its fun colors, compact size, and low price, I’d say it’s a better option for group pics with friends than a more cumbersome and socially frowned-upon selfie stick.