As far as gaming computers go, there are bound to be trade-offs: bigger size means better performance, and more portability is going to naturally lead to compromises when it comes to pure gaming muscle. The Asus Republic of Gamers G751 is a top-tier gaming notebook, but it still falls prey to that essential truth about gaming notebooks, making for an experience that stretches the definition of “portable,” but that also should keep gamers looking for maximum performance in something that still meets the basic definition of a notebook very, very happy.

The Asus ROG G751 is a beast of a gaming machine, and that means you’re not going to get away with slipping this thing into a small shoulder bag and running around without any noticeable impact in terms of physical burden. It’s almost 11 pounds, which is a far cry heavier than, say, the Retina MacBook Pro, which weighs in at just under 4.5 pounds. It has a 17-inch display, however, which is great for more immersive gaming, but not so great for overall physical dimensions. In short, the ROG G751 will stretch your definition of laptop. On the other hand, I can technically use it on my lap, and despite its size, it’s still more comfortable than the early notebooks I remember using back when they could barely do more than your average flip phone.

Let’s face it: If you’re interested in the G751, you’ve already declared that you favor the gaming performance end of the spectrum, over and above the portability paradigm. Likely, you’re looking for something that’s easier to move around than a desktop tower, but that offers comparable performance, complete with a built-in display so that you don’t have to supply your own when you’re away from home, or just in your house but not within easy reach of a fixed-position monitor or TV screen. Assuming that’s correct, the design of Asus’ hardware offers a lot of considerable advantages that aren’t necessarily available on competing devices.

The laptop’s rubberized top shell ensures you can keep a good grip on the machine when it’s in transit, for instance, and the grippy feet make for stable desktop sitting, with ample clearance underneath to help with cooling. There are two large exhaust ports on the back for fanned cooling, too, built into the rear hinge, which helps the laptop’s display tilt without undue wobble, and that also allows for more room for the high-capacity removable battery.

The light-up keyboard, with special emphatic lighting on the WASD keys, and the extra-wide trackpad with big left and right buttons are also nice touches. In terms of gaming notebook design, my one complaint is that I found myself accidentally hitting the hardware eject button on the Blu-ray drive, making the disc eject a good percentage of the times that I wanted to either pick the laptop up or even just shift its position with the screen open.

Asus has put some special features into the ROG G751 that are very handy, including a dedicated recording button that activates Nvida’s ShadowPlay for in-game session recording. It’s got a light to tell you when it’s running, and simplified the process immensely once you go through the initial setup, which is very cool if you’re looking to record in-game events for later sharing for posterity.

Other dedicated keys on the Asus include a Steam key, which launches the app no matter where you happen to be, kicking you right into Big Picture mode so you can do away with the noise and get right to gaming.

There are also three programmable macro keys for setting up combos to use with single clicks, and a key to launch the Republic of Gamers Gaming Center, which lets you configure said Macros, as well as see how much memory and storage are currently being used, adjust audio and switch between pre-configured gaming modes, which trigger different system settings. 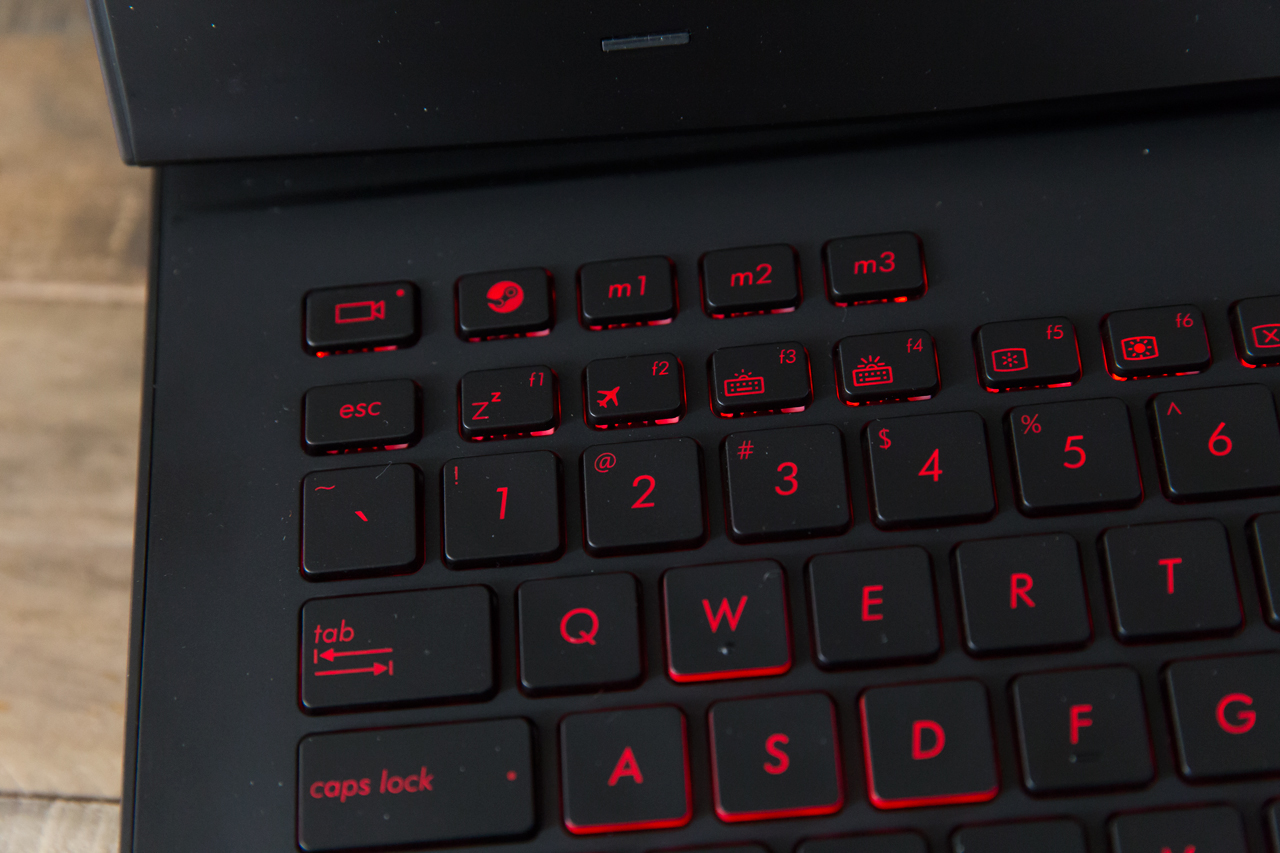 The screen on the Asus is set on a hinge, as mentioned, which also puts the gamer closer to the action when you’re actually running software. The display itself, while only full HD on a machine with specs that can (and do, via external monitors) power 4K output, is very bright and even, and thanks to the matte finish, works well in most lighting conditions without introducing any glare into the mix.

There’s an Asus “Splendid” tech software feature that lets you tweak color profiles and switch between three saved configurations, too, which helps you deal with variances between software performance.

As mentioned, the display on this laptop, while not Ultra HD or 4K like on the latest from Razer, is well done and easy to watch, even for longer gaming sessions. It can also output to 4K displays if you happen to have one for installing yourself at a desk at home for prolonged gaming sessions, thanks to that incredibly powerful Nvidia GeFore GTX 980M graphics card.

Said processor, combined with the Core i7 CEPU, manages to allow for 60 fps performance in some of the latest top-tier gaming titles, including personal favorite Shadow of Mordor. 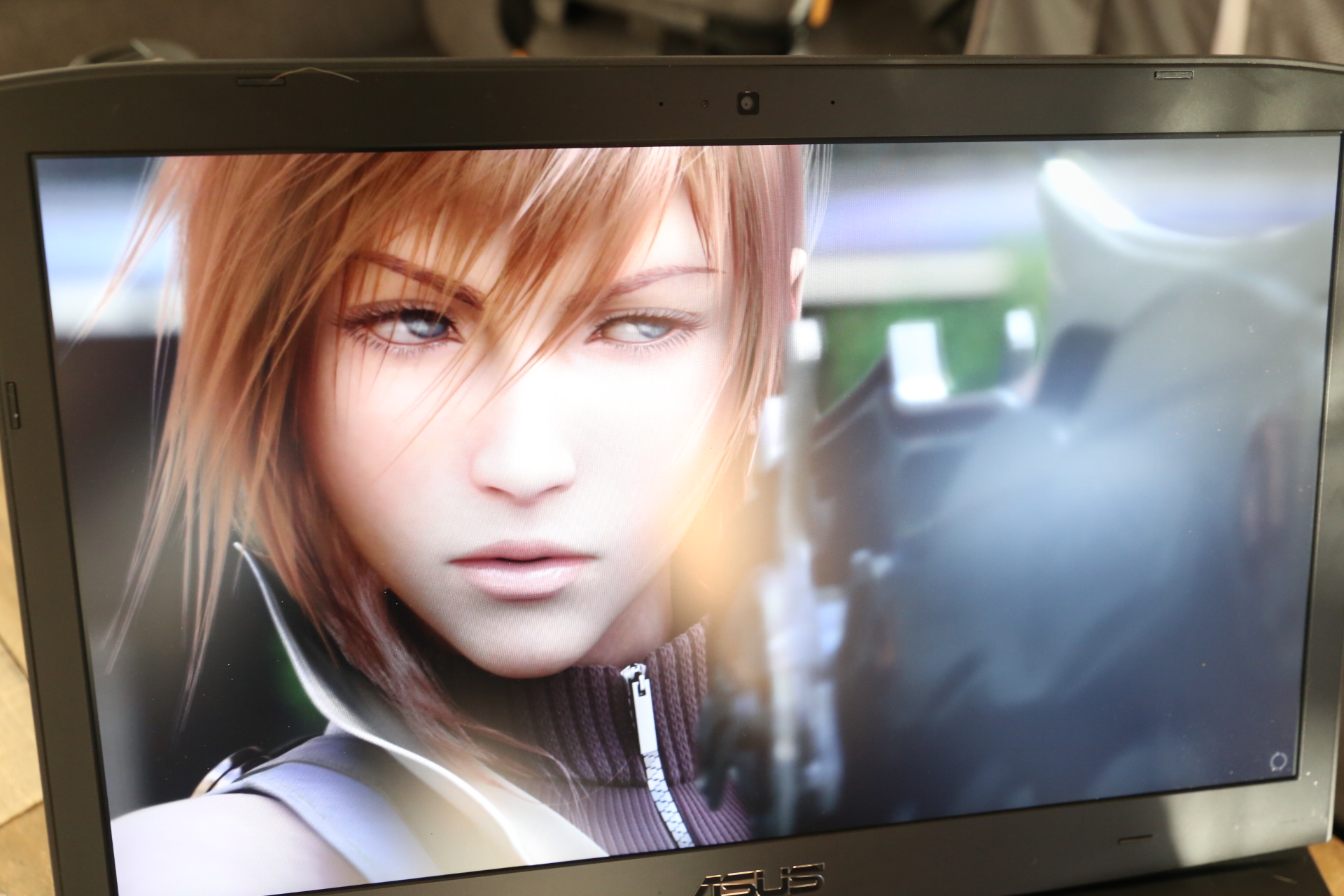 In short, if you’re looking for something that brings desktop power to bear on games without towers or the need for external screens, the Asus G751 will definitely suit your needs. Admittedly, the version we tested was kitted with specs that are none-too-cheap, but with a final price of $2400 as reviewed, it’s actually not crazy compared to what you might expect for this kind of performance. The only place where it doesn’t do so well is when you’re using it for prolonged gaming sessions unplugged, but if you thought Asus might have magically wizarded away the limitations of current battery tech, then you’re dreaming anyway.

Speaking of battery, you’ll be lucky to get much more than an hour out of the G751 while gaming, but in standard mixed-use performance it’ll last longer, though still only about four or five hours. Again, if you’re looking for a long-lasting battery, you’re probably not also looking for a desktop replacement gaming machine, so it shouldn’t really be something that affects your choice unless you’re willing to compromise on graphics and framerate.

The Asus ROG G751 is a gaming laptop that takes its job very seriously, and comes out near the top of the field as a result. In fact, for gaming on the go, it’s my current top pick, though I am intrigued by Razer’s latest. Asus offers a larger screen, with a full-size keyboard, and a more powerful Nvidia graphics card, however, meaning it’s still probably the best option for those seeking the best possible gaming experience in a computer that will still be able to travel, too.