This week the Internet lost it over a llama chase, Kanye apologizing, Madonna taking a tumble, and that damned dress – things that arguably do not actually matter that much. But there was one story that bubbled up in the midst of all this, highlighting the triviality of social media chatter: The death of Ajivit Roy, an outspoken Bangladeshi-American blogger.

Despite a flood of death threats from Islamic extremists, Roy, 42, had left his home in suburban Atlanta to visit friends and family in his native country of Bangladesh this week. According to news reports, the secularist blogger was leaving a book fair in the capital city of Dhaka late Thursday night when two machete-wielding extremists cornered him and his wife. They hit her sharply on the head, and then hacked him to pieces.

Roy became the target of militant Islam after the release of his book, Biswasher Virus (Bengali for The Virus of Faith), in 2014. The book quickly rose to the best-sellers list in the predominantly Muslim Bangladesh and, as Roy put it, “hit the cranial nerve of Islamic fundamentalists.”

“I suddenly found myself a target of militant Islamists and terrorists,” Roy wrote on his blog Mukto-Mona, or Free Mind in Bangladeshi. “A well-known extremist by the name of Farabi Shafiur Rahman openly issued death threats to me through his numerous Facebook statuses. In one widely circulated status, Rahman wrote, ‘Avijit Roy lives in America and so, it is not possible to kill him right now. But he will be murdered when he comes back’.”

Roy, who wrote for several secular outlets about the freedom of thought and atheism, was the second blogger to die at the hands of Islamic extremists in Dhaka in the last two years. The first was Rajib Haider, an atheist blogger who had been a critic of the religiously conservative political party Jamaat-e-Islam. He was also struck down by machete.

“This has been going on in Bangladesh,” Bangladeshi blogger Parvez Alam told the New York Times by phone. “The bloggers have different religious viewpoints and we’re being attacked again and again, and we’re not getting justice.” 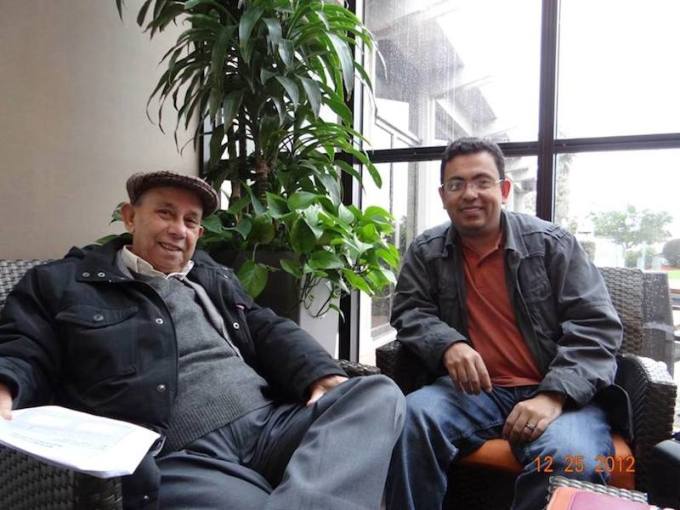 Bangladeshi-American blogger Avijit Roy sits on the right with a friend.

Militant group Ansar Bangla 7 took credit for Roy’s assault on a now defunct Twitter account but no immediate arrests were made. Bangladesh does not have a reputation for protecting journalists, despite threats of death or publicly posted blogger hit lists from militant extremists. The country slipped further down in the Reporters Without Borders World Press Freedom Index, ranking 147 out of 179 countries this year.

After the United States Federal Bureau of Investigation stepped in to offer to help the government of Bangladesh in finding the assailants this weekend, Bangladesh arrested three suspects.

What happened to Ajit Roy was not a seemingly endless topic of discussion on all the major networks. BuzzFeed did not write 38 posts at last count about it. Twitter did not explode over which side to take (or which color). I received zero bad pitches in reference to it. But this story impacts us more than a celebrity Instagram or the color of a dress.

In the U.S. we have the freedom to write what we want (mostly) without fear of retaliation from our government. We have a government who protects those freedoms in America and in the free world abroad.

The United States is ranked 46 out of 179 countries in the world for press freedoms.

This is no absolute guarantee, of course. France supports an open press but was not able to prevent the Charlie Hebdo shooting by militant gunmen. But if the Reporters Without Borders Index holds weight as a measure, we do have more freedom than most.

Roy was a blogger able to reach beyond the U.S. border and back into his homeland of Bangladesh in a way that would not be possible without a free and open Internet. He wrote what he believed in and he was relatively safe to do so in his home in Atlanta. Technology connected his ideas to a corner of the world where many people would rather he didn’t have that freedom.

Roy was said to be a prolific writer who wielded the power of the digital press to influence the thoughts of his countrymen. This week, while many of us argued over a garment, protestors rallied in the streets of Dhaka to demand justice over his murder. A vigil was held for Roy at the site of his murder this afternoon. The ideas he disseminated will no doubt remain after he is gone, off and online.