With its web-based, no-native Firefox OS smartphones launched only in 2013, the open-source web software maker Mozilla has been a late mover in mobile, with only 1 million devices shipped to date. But it continues to step up its efforts nevertheless: at the Mobile World Congress in Barcelona, Mozilla today is announcing new deals with several carriers, OEMs and a chipmaker that will see it active in 40 markets by 2016.

Perhaps most notably, it will work with Verizon to bring the first Firefox phones to the U.S. (along with Japan’s KDDI and Telefonica for their respective footprints) — not smartphones, but feature phones that will focus on form factors like flip and slide openings. And it will work with Orange to crack into Africa and the Middle East with the Klif, a new phone that will cost less than $40.

Alongside the device announcements, Mozilla is also continuing with improvements for Firefox OS, such as support for multi-core processors to keep up with developments in Android in particular, and support for NFC-based payments. And it’s also continuing to play its hand in areas where it hopes to continue to stake out a claim.

There are also more privacy features getting added to the open source platform (but, again, no special “privacy phone”), and Mozilla continues to add more support for WebRTC, but no availability of its video chat platform Hello just yet. And it is also launching a new version of Webmaker to court more developers to make apps for the mobile web. “The web can, must and will remain open,” noted Mitchell Baker, the chairman of the Mozilla Foundation, at the press event in Barcelona today. “That’s why we launched Firefox, and that’s why we launched Firefox OS.”

The challenge today (and in future) for Mozilla is that Google’s Android currently accounts for the vast majority of all the smartphones that are shipped today by volume (over 80% by some estimates). And when it comes to profits, Apple accounts for nearly 90%. Mozilla does not disclose how well its phones have sold to date but by one estimate, from Strategy Analytics, Firefox shipped only 1 million units globally in 2014. That is up from near-zero in 2013, when much had yet to be launched.

Andreas Gal, the CTO and VP of mobile for Mozilla, spins this domination as an opportunity.

“The Android ecosystem is unhealthy, and we are basically facing a duopoly,” he told TechCrunch in an interview. “It’s true that Apple makes the most profit and Android accounts for the most devices, with most of that revenue carried home by Google. But OEMs and carriers are having a hard time making differentiated devices. This is where we come in. We are much more flexible, and we don’t have the same priorities as these two do.” Mozilla today makes much of its money from search deals with the likes of Google and Yahoo, who pay to be placed as the default search option on the Firefox web browser in different markets (and you can read more from Gal in an interview here).

Much of Mozilla’s smartphone strategy up to now has been about targeting developing markets, because “that is where the growth is happening today and for most the iPhone is not affordable,” says Gal. Now it’s also trying the reverse.

Verizon Wireless, Telefonica and KDDI — along with device maker LG — plan to launch Firefox OS-based feature phones, which they will sell into markets like the U.S. and Japan. Breaking from the very standard touchscreen slab that we have come to associate with smartphones today, these devices will also incorporate more retro forms, such as clamshell-style devices that you flip open to use, and sliding openings. These devices — no visuals available yet — will start to ship in 2016, Gal tells me.

The idea here is to make handsets that will appeal to consumers who are still using feature phones, who prefer more a more tactile experience, who want something a little simpler to use, or who are just missing their old, beloved RAZR.

This doesn’t mean that the devices will not be without some high end bells and whistles. They will still incorporate things like LTE, music players and access to (web-based) apps, Gal says. You could argue that they may be more accurately described as smartphones dressed up in feature phone clothing.

There is some logic to courting the lower end of advanced markets like the U.S. Although we hear a lot about how smartphones are dominating a lot of new device purchases today, about 29% of all mobiles in use in the U.S. today are still feature phone devices, according to Nielsen. Mozilla has around a 16% share of the desktop browser market in the U.S. currently and so tapping a new group of users there could help it grow its overall position.

On the other side, Mozilla’s Firefox OS is essentially giving carriers and OEMs a way to compete with Samsung and its Tizen platform for feature phones, as well the lower end devices from Nokia/Microsoft. The promise it makes is that it gives a lot more freedom to carriers and device makers when designing these devices.

“Verizon aims to deliver innovative new products to its customers, and this initiative is about creating a modern, simple and smart platform for basic phones,” Rosemary McNally, VP of device technology at Verizon, said in a statement. “We’re looking forward to continuing to work with Mozilla and other service providers to leverage the power of Firefox OS and the Web community.”

KDDI, meanwhile, says that its move to offer a low end Firefox phone has grown out of some early traction on the FxO Firefox OS device that it launched in Japan in December 2014. “We have been gaining high attention from the market with Fx0…and we have faith in the unlimited potential of Firefox OS,” Yasuhide Yamamoto, VP of product for KDDI, said in a statement. “KDDI has been very competitive in the Japanese mature mobile phone market for decades, so we are confident that we can contribute to the Mozilla community in developing this new concept product.”

KDDI has also been supporting Mozilla in another way. It’s taken an investment in a hardware maker called Monohm, which is building IoT devices based on Firefox OS.

Telefonica was one of Mozilla’s very earliest partners in conceiving a smartphone based on Firefox OS and currently sells these in 14 of the markets where it is active, so it’s no surprise to see it also among those that are working with Mozilla to expand the range of devices that are coming out of this.

“Telefónica is actively supporting Firefox OS, aligned with our strategy of bringing more options and more openness to our customers,” Francisco Montalvo, director of devices for the Telefonica group, said in a statement, who adds that extending its partnership to feature phones will help “bring connectivity to more people who are looking for a reliable and simple user experience at affordable prices.” 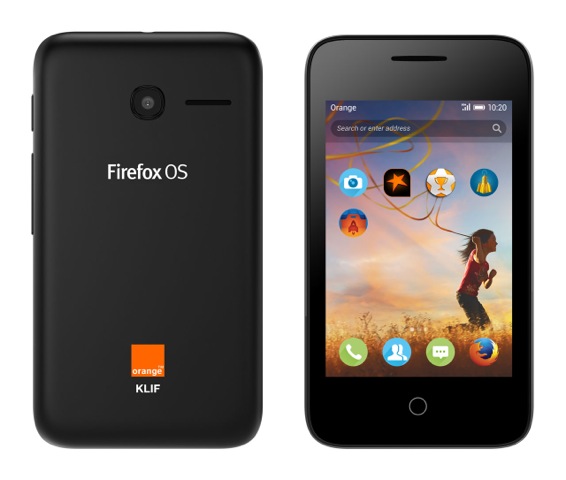 The push into countries like the U.S. is not exactly a turn away from emerging markets, however. This is getting a big boost by way of a new deal with France’s Orange, which will be selling a new phone called the “Klif” — a device that will sell for “under” $40, including a bundle of voice, data and text services. Pictured above, the Klif will start to ship in Q2 of this year in 13 markets including Egypt, Senegal, Tunisia, Cameroon, Botswana, Madagascar, Mali, The Ivory Coast, Jordan, Niger, Kenya, Mauritius and Vanuatu.

Initially, this will be in an exlusive deal with the carrier, Mozilla says.

The device, which will be made by Alcatel Onetouch (the venture with TCL of China), will feature connectivity speeds of up to 21 Mbps, as well as a dual SIM, and a two-megapixel camera and micro-SD slot. It will be the first Firefox OS phone powered by a MediaTek processor, meaning that now the OS is supported by three major chip makers including Qualcomm and Spreadtrum, which itself launched a $25 reference design last year.

Gal says that the Spreadtrum-based phones were particularly aimed at countries in Asia like India, where 3G connectivity is often still lacking. Africa, on the other hand, has some extensive 3G network build out already, “so they are looking for different phones.”