Earlier this week, as Re/Code’s Jason Del Rey was trying to procure a chicken parmesan via text, we were trying to procure a tiger via text. “You want a tiger delivered? Just text the details and Magic’s got you covered,” read the lede of the VentureBeat article about nascent on-demand startup Magic. 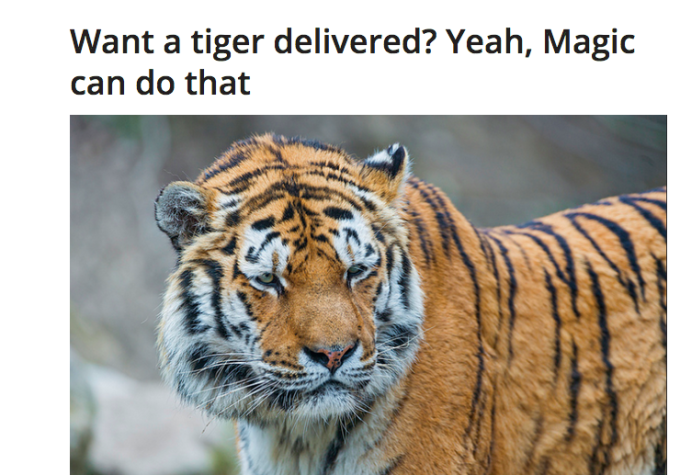 As I’ve killed many hours watching tiger cubs frolic in the pool or bounce around on the couch on YouTube, I’ve entertained, even Googled, tiger ownership.

You cannot “just text” for one. Especially in California where they are banned. 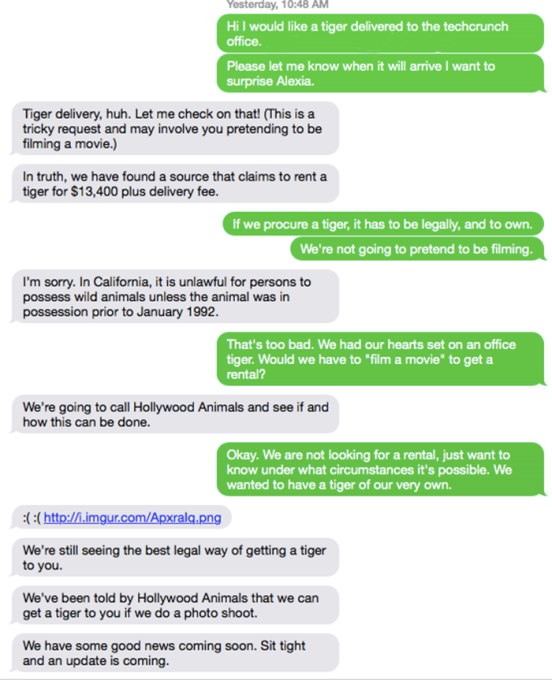 So, knowing the law and calling Magic’s bluff, our very own Ryan Lawler texted Magic for a tiger to see what Magic would do. He was met with a 15K-long wait list. We expensed the $50 to jump the long line and asked Magic if it could send a tiger to our office.

We were told we could rent a tiger “for a photo shoot” and that a Magic source “claims” to rent out a tiger for $13,400. Hmmm … does Bloomingdales make you do a photo shoot if you want to buy some clothes? Does the Magic effort to deliver you sushi involve renting the sushi? The latest update to our efforts on that thread is above. We’re still sitting tight.

Perhaps Tiger Balm was easier than an actual tiger? At 3:21 p.m. on Wednesday then, I asked Magic for some Tiger Balm, and at 5:10 p.m., an hour and 50 minutes later, it was delivered to my home in Palo Alto. It would have taken me all of 20 minutes to walk to CVS to buy the balm myself. 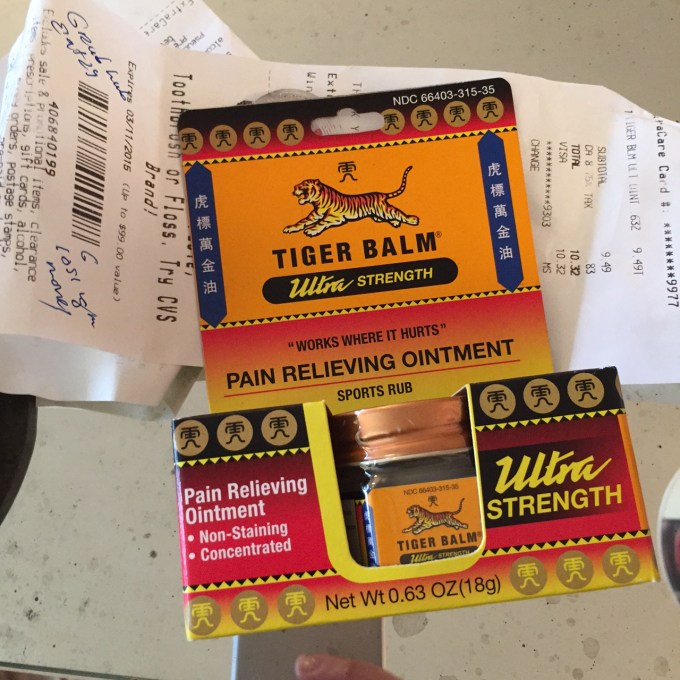 I asked the guy who delivered my balm if he was from Postmates, and he said yes. He paid $10.30 for the balm per the receipt, and Magic charged me $10 only after I reminded my operator that I had not paid. I guess Magic just ate the $7 Postmates delivery fee.

According to my Magic operator, between 9 and 13 percent of all Magic orders are delivered by Postmates (Magic founder and CEO Mike Chen tells me the company has not yet calculated that statistic). So Snapguide founder Daniel Raffel, who compared the delivery times of Postmates and Magic, is sort of defeating the purpose. For example, Raffel’s Magic lunch order was also delivered via Postmates, but Magic also uses other on-demand players like GrubHub and Eat24.

The model of taking a loss on orders doesn’t scale. Chen, who studied philosophy and computer science at Oberlin College, estimates that the company breaks even on 50 percent of orders, loses money on 25 percent and profits on 25 percent — which he says is breaking even overall. Operators are supposed to factor in the time they spend interacting with customers and vendors into the Magic charge. “I’ll have better numbers for you in a week,” he tells me.

Chen also reveals the company has had “dozens” of requests for tigers since the service’s launch; that the tiger thing has “become a fascination.”

“When doing press, everyone for some reason asked, ‘What is the craziest or weirdest request you’ve gotten?'” Chen says. “So we mentioned the guy who wanted a tiger. But a tiger is very very difficult to deliver. There’s no way to have him own a tiger, because it’s illegal. Does he want a photo, or to interact like a tiger trainer? I told everyone that we did not deliver the tiger, but no one wrote that.”

Magic did not deliver the tiger. And now they have a staff member committed to tiger requests, among other things. This frustrates Chen.

“I don’t like the tiger thing, because it makes it look like it’s a novelty service. The worst thing is the name, Magic. I was like, ‘I’ll call it this right now.’ I don’t even think the domain, getmagicnow.com, is good. Between the tiger and the name, people are talking about it like ‘Is this even real?’

“I regret saying anything about the tiger,” Chen laments. “It’s making people who need to use [Magic] not show up, and other people sign up for it thinking something else.”

Chen says that since he sent the service to five or so friends last Thursday, the company has processed 25,000 to 30,000 messages, and “thousands” of people have signed up for its $50 VIP service to skip the now-30,000-long wait list. He’s considering raising the VIP price to $100.

Magic, housed in Made in Space‘s office at NASA, has gone from 5-30 people. VCs are knocking on his door.

Wednesday was Chen’s 30th birthday, and he spent it at the office dealing with the service’s scaling problems. Magic was started on his personal backup server and in many cases, does not use the APIs of the services it mediates.

Does he think Magic will be around in a year? “I really believe so. But will there be this much hype around it? I don’t think so.”

When I liken the company to SendYourEnemiesGlitter, he responds, “People didn’t need or want the glitter. Glitter is not something you actually need or want. We serve real needs that people have, from groceries to appointments.”

Despite working on two other startups, Chen plans on committing most of his time to Magic in order to build out what the project should have been in the first place.

But will they ever deliver a tiger?

“Now that the tiger is a ‘thing,’ maybe somebody will be in an area that allows a tiger, or want to [legitimately] be a tiger trainer? Maybe I’m just fantasizing … But, no we’re not going to send a tiger to someone to be a pet in California. That’s illegal,” Chen admits.

For what it’s worth, when we called L.A.-based Hollywood Animals they offered to rent a tiger to us for a photo shoot for $8,000. If we were to do it for a party, as Google’s infamous Orkut Büyükkökten is rumored to have done, it would be the same price, but we would need 40 hours of training if we wanted to play with said tiger.

That’s $5,000 less than what Magic said a source said the tiger would be. Maybe that’s exactly the type of order where Chen hopes to make a profit from — outlandish requests that people are too rich or too lazy, or both, to research on their own. (When pressed, Chen claims that $13,400 was the representative quoting a price given to the previous tiger requester.)

When asked if Hollywood Animals had received a lot of strange calls from San Francisco lately, the woman on the phone said yes, but not necessarily for tigers.

“You are beating us out for weird,” she said.