While IBM is number-one when it comes to the number of patents filed in the U.S., in Europe, Samsung is leading the pack. Today, the European Patent Office released 2014 figures for patents filed in the region, which showed that the Korean company, and currently the world’s largest smartphone maker, filed 2,541 for the full year. In terms of countries, the U.S. dominated the list, with 71,700, or 26% of all patents, filed.

Overall, the number of patents filed in Europe grew by 3.1% in 2014, with more than 274,000 filings, a record number according to the EPO. In other words: in keeping with the expensive, lengthy, and high-profile legal fights that have arisen out of intellectual property disputes — and despite the many flaws in the system that need to be fixed (patent trolls being one of the biggest) — patents continue to be a power lever for companies trying to protect their businesses from competitors.

And yet patents are not the whole story. Apple, currently the world’s biggest company by profits, filed only 294 patents in Europe — like IBM, putting more of its emphasis on filing in the U.S. market.

The bigger picture for Europe is that it’s continuing to hold parity with the U.S. when it comes to patent creation (and potential enforcement), with patent filings at the EPO covering 38 member states.

“Demand for patent protection in Europe has been growing steadily, and is up for the fifth year in a row,” said EPO president Benoȋt Battistelli in a statement. “Europe continues to strengthen its key role as a global hub of technology and innovation for a growing number of companies from around the world. The rise in patent filings originating from Europe underlines the importance of patent-intensive industries as a solid base for the European knowledge economy: They foster Europe’s competitiveness, economic strength and employment.”

Here is a break-down of some of the top-line numbers in the report:

Breaking out U.S. only companies from the bigger list, it’s not IBM but Qualcomm that leads with the most patents, with 1,459 filed. The semiconductor giant is followed by Intel and United Technologies, the industrial conglomerate that makes everything from Black Hawk helicopters to fuel cells. Microsoft, Google and Apple rank respectively at 4th, 9th and 17th among U.S. companies filing in Europe. 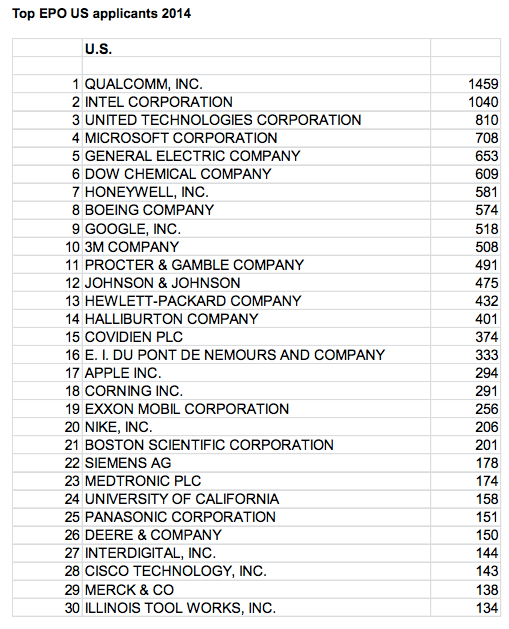 In the EPO, it looks like the companies focusing on hardware are filing more patents in the region, with Samsung’s top position followed by European companies Philips and Siemens. LG and Huawei round out the top five. Interestingly, since Nokia has sold off the biggest part of its business — handsets — to Microsoft, the company has been focusing more on its intellectual property position, and that is being played out in the EPO, too. The company filed just over 1,000 patents last year. 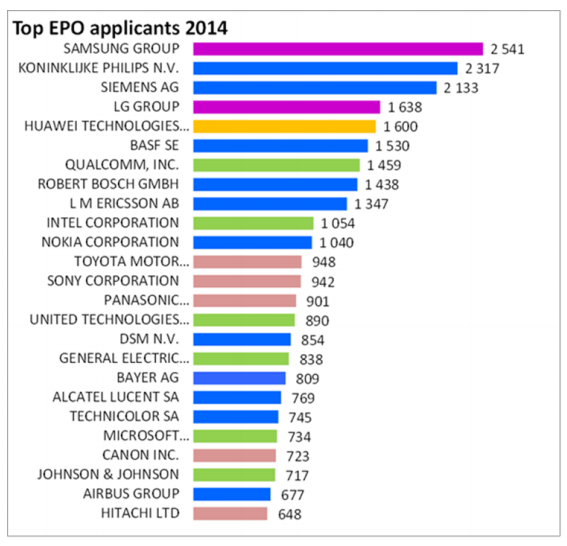 As the center of the tech world, it’s unsurprising that the U.S. vastly outweighs every other country when it comes to overall patent filings. The second-largest country, the EPO says, is Japan with 48,400 patents, followed by Germany and China. Interestingly, China is currently rising the fastest of all of these, up 18.2% over a year ago. 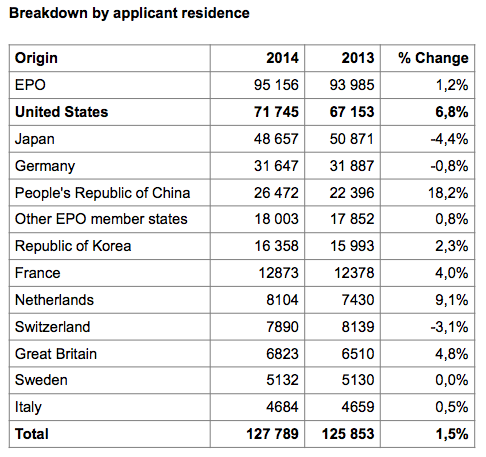 Medical tech leads ahead of tech

Medical technology was the biggest single category for patents filed at the EPO in 2014, with 11,000 patents. However, if you combine digital communication with computer technology — two distinct categories but both falling under IT in a more general sense — these well exceed medical, with almost 20,000 patents filed between them. 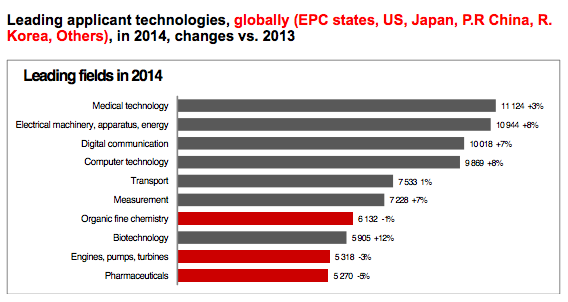