Google Search was not built for mobile. It’s all about lists of web pages, but the small screen is ruled by apps. That’s why if Google launched today, it might look a lot like Vurb…which did launch today.

Vurb is a mobile search engine that pulls info from partnered apps like Yelp and Rotten Tomatoes, and deep-links you out to apps like Uber and Google Maps. Rather than send you clicking through links, it cobbles together critical content and contextual suggestions into saveable, shareable, actionable cards. You could plan a whole dinner-and-a-movie night without ever typing or going back to your homescreen.

Whether challenging Google on search is brave or just delusional, only time will tell, but Vurb is surely one of the most audacious startups I’ve seen lately. And since investors love big, risky bets, Vurb has $10 million in firepower Redpoint Ventures and some A-List angels.

What’s encouraging is that Vurb manifests in the West a trend that China is already demonstrating: the future of mobile lies in uniting fragmented functionality from across the app ecosystem into a centralized hub. 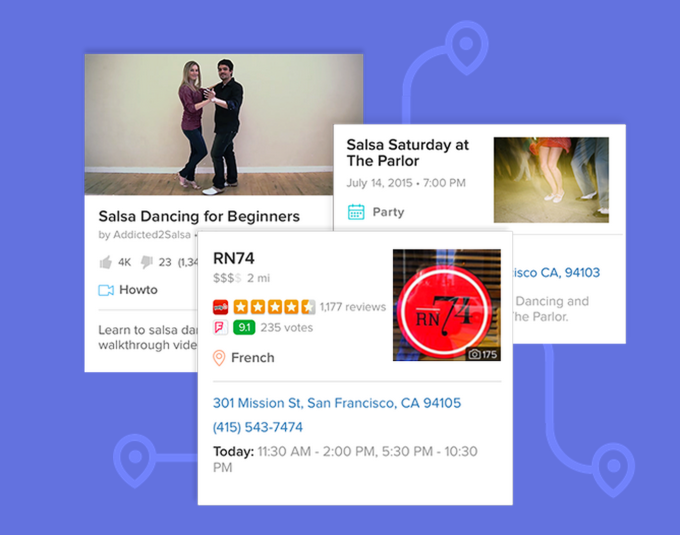 A Portal For Mobile

On the web, Google’s conduit model worked fine. Everything was an indexable website that served many functions, and Google could use PageRank to deliver you to the right one. It could show a list of links, and let you pop open multiple browser tabs that you could quickly switch between or even show simultaneously. It was easy to multi-task. It searched for information, you aggregated the answers.

Mobile is different. Information is trapped in siloed, single-purpose apps and walled gardens that PageRank doesn’t understand as well. Everything is being unbundled. App discovery in the crowded stores is a mess. Opening multiple tabs is a chore and so is switching between them since you can only view one at a time. Multi-tasking is clumsy. 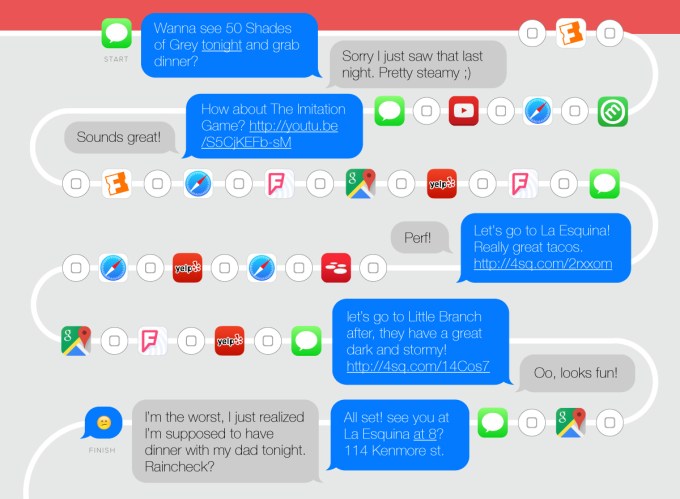 All the app-switching you have to do to plan a night out across fragmented, unbundled mobile apps

That’s why Vurb wants to aggregate the answers for you.

It has some strong role models out east. As Andreessen Horowitz partner Benedict Evans detailed, Chinese apps WeChat (social) and Baidu Maps (location) are thriving by “bundling multiple services into one app”.

Evans explains that “This changes the layer of aggregation” from a phone’s home screen launcher to a single, multi-purpose app. This relieves users from discovering, downloading, and opening every app they need information from.

Vurb wants to be the portal for mobile. Yahoo and AOL reborn to return order to the app sphere after The Great Unbundling.

Vurb’s ascent to become a legitimate challenger to Google search started in 2011. By 2013 it had raised around $2 million from Charles River Ventures, CrunchFund (started by TechCrunch’s founder), Atlas Venture, and DCVC, plus angels like Max Levchin (PayPal, Drew Houston (Dropbox), and Naval Ravikant (AngelList). When Vurb came out of stealth, it took the grand prize in the TechCrunch Disrupt NY Startup Battlefield 2014. That clout helped it raise $8 million more led by Redpoint.

Since then, Vurb’s been testing and pulling in users of its waitlist. To stay laser-focused on mobile, the startup scrapped its full-featured web version. “Mobile search is totally wide open, because everything is gravitating towards usage of apps” Vurb founder Bobby Lo tells me. His goal became to determine “How do we create a more cohesive mobile experience around finding, planning, and sharing information?” 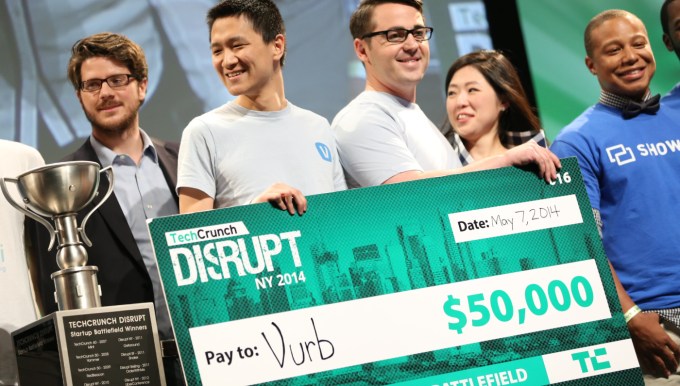 Google has its own plan fix search, but it has to carry all its historic design baggage. So rather than completely redesign search, it’s focused on augmenting it with contextual suggestions through Google Now and starting to index mobile apps. For pulling in immutable facts and actionable info from your other Google products like Gmail and Calendar, Now works quite well.

But Google Now is editorially driven, so it will take time for its humans to learn how to deliver content about the long-tail of the web. It also doesn’t address saving and sharing searches. Googling from home felt like a natural solo experience, but on the go with mobile, search needs to be social.

Unlocking Mobile Search For Everyone

Today, Vurb opens its iOS app to the US, Canada, and the UK with explicit support for searches of Places (restaurants, landmarks, stores), Movies, TV, Video, and Music. Events and shopping are two more verticals it plans to attack soon. An Android app is in the works.

Here’s a run-through of what you can do with Vurb. 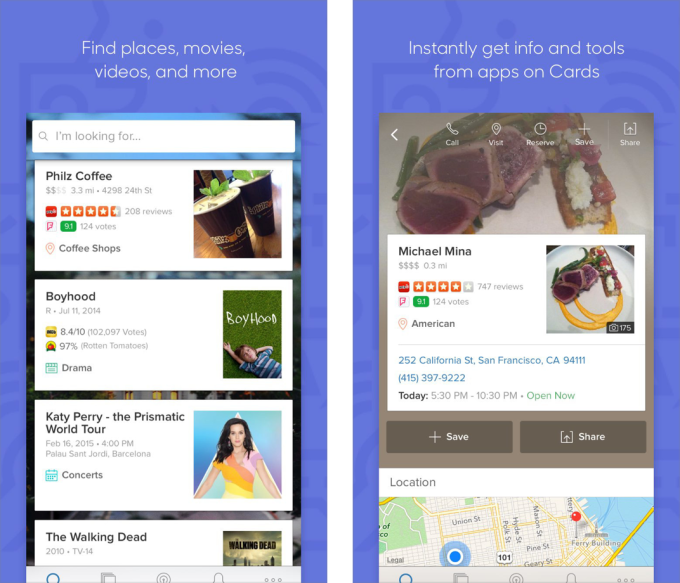 From the homescreen, you can search across all of Vurb’s verticals or swipe to start browsing in a specific one. Say you searched for a movie like 50 Shades Of Grey. In-line on the search results, you’ll see IMDB, Rotten Tomatoes, and MetaCritic scores trying to warn you the film is awful. Tap through anyways, and you’ll get a full, rich media card with details about the film, showtimes, recent news, cast and crew, video trailers, reviews, and options to deep-link to pages about the movie in other apps.

Tap through showtimes and you can bounce into Fandango to buy tickets for the lukewarm S&M romp. Once Vurb knows what theater you’re going to, it can contextually offer up suggestions of nearby restaurants, from fancy-pants bistros to holes-in-the-wall. Each eatery’s Vurb card can show reviews, an option to book through OpenTable, and deep-links into Uber and Lyft to instantly call you a ride with the restaurant pre-populated as the destination. You’ll be munching aphrodisiacs in no time. 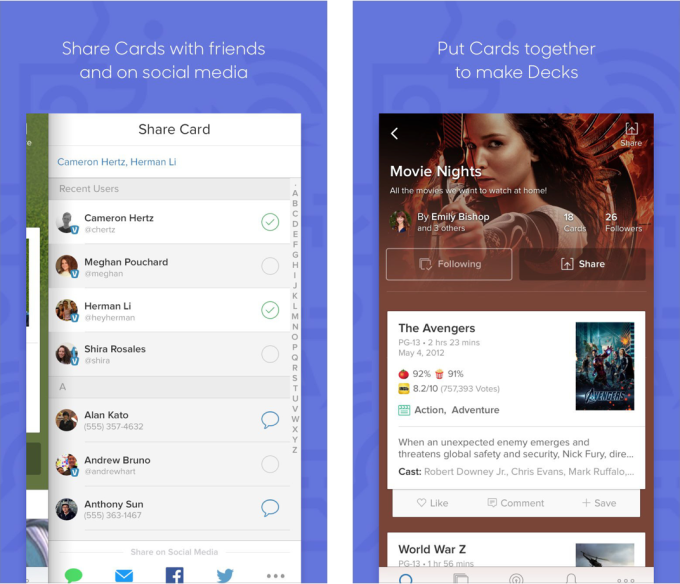 All along the way, any card you come across can be saved into a “Deck” for later reference, and each card or deck can be quickly shared with others. A swipe left reveals a friend selector that delivers mobile web links to the card or deck, plus an in-line image of it, so Vurb helps people without its app, too. Tap your significant other, and they can audible you to a better film or hipper restaurant

Recipients can even like or comment on plans sent to them to help finalize a night on the town. Shoot friends a deck with a few movies and restaurants, and you have a full night laid out. Vurb hopes people will follow friends, tastemakers, and influencers and view the to check out decks of recommendations they’ve made public. Theoretically, someone could become a star searcher, creating popular decks of hotspots.

The Age Of Context

Lo beams that Vurb is “very different than traditional search with 10 blue links.” He knows it’s still a long shot, but is happy to take a swing for the fences. He says “VCs don’t want a 3X return. They want a 100X return otherwise this is a failure as an investment.”

To return that money, Vurb has plenty of opportunities. With search results comes the option for sponsored placement. And with developers pouring cash into app install ads on platforms like Facebook, Vurb could charge to suggest them for different tasks.

One disadvantage of Vurb is that other portals from AOL to WeChat to Snapchat Discover were built atop messaging, something you do many times per day. Vurb is built atop search, which isn’t quite as frequent an activity. That will make it tougher to get people who download Vurb to remember to use it consistently and not slip back to Google. Vurb will have an uphill climb to the homescreen.

Vurb does a lot. That might sound good but it can make an app feel bloated or confusing. Search is one of our most deeply rooted behavior patterns. We’re trained to scan blue links. Even if change is inevitable, it can be slow to gain momentum.

Lo concludes that the Internet started with the age of surfing the web through portals to browse one’s way to information, before evolving to search where we went to find information. Now Vurb wants to catalyze the next phase, the age of context, where information comes to you.