A team of e-commerce vets is today launching a new service aimed at online retailers called Answerbook which allows companies to better target shoppers with highly personalized emails based on those customers’ website and email interactions as well as their purchase history. The solution today is largely aimed at smaller retailers, like those hosting their sites on e-commerce platforms like Shopify, where they have somewhere between half a million to a million in sales.

However, the company is already talking to larger businesses in an effort to develop an enterprise tier to its service, we’re told.

Answerbook was founded last year by Chris Nguyen and Lee Liu, both of whom have backgrounds in e-commerce and using data for targeting purposes. The two had previously built and sold their recruiting site JobLoft to onTargetjobs in 2007, and then sold dating site Cupid.com to EasyDate. They also founded a social commerce site called TeamSave in 2010.

While in all their prior efforts, the founders had learned the value of leveraging data in order to attract and re-engage users, it was with TeamSave that they began building an internal personalized marketing solution, using things like website preferences, clicks and purchase history to better reach their customers. 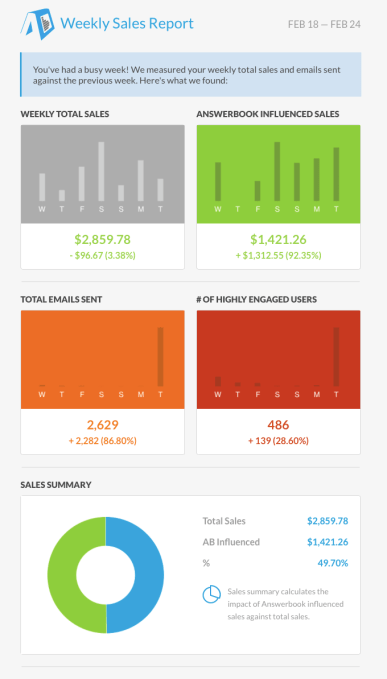 Explains Nguyen, smaller companies don’t have the tools to do advanced targeting the way that the bigger guys, like Amazon, eBay and Walmart do. And the solutions for email personalization that are out there today often only look at customer purchase history, not other factors.

“We started talking to e-commerce companies, and they said, ‘we have this problem – we’re sending blast emails everyday but we don’t know how to personalize this information,'” says Nguyen. The companies have internal teams who could pull data to personalize their emails, but by the time they did, it would be too late for that data to still be actionable. “Can you help us automate that?,” these businesses said.

“I love the fact that companies like Shopify allow you to make a fast and efficient online store in days, but they lack the resources to truly understand the marketing aspects,” Nguyen adds, explaining the hole in the market he hopes Answerbook can fill.

To use Answerbook, retailers place a single line of JavaScript code on their website, similar to setting up something like Google Analytics. Afterwards, they’re then able to track things like what pages and products a customer is viewing, what they’re placing in their cart, their purchase history and more. Combined with email interaction behavior, this data can then be used to create a series of personalized emails for each customer. 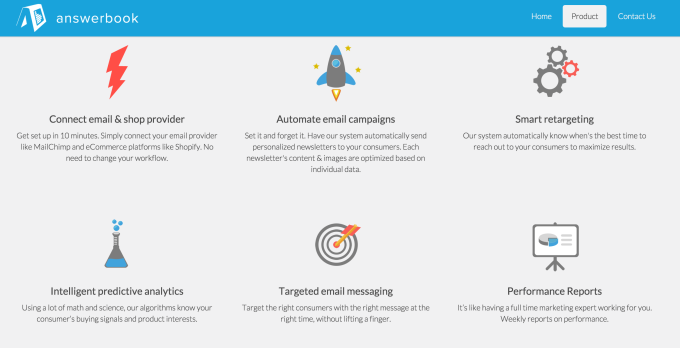 Included in Answerbook’s service are a half-dozen “triggers” a retailer can kick off, which help them to configure emails related to things like price drops, cart abandonment, items that have returned to stock, website abandonment, or they can send emails that simply recommend products or showcase what’s new and trending this week on the retailer’s site. Businesses can also choose to create their own custom triggers, or combine the ones provided to more narrowly target their customers. And Answerbook today works with other email services the company may already be using, like MailChimp, for example.

The company has been in private testing with a small handful of retailers ahead of its public launch. One online phone case company saw a 40% lift in sales after setting up Answerbook to email reminders to customers which included a 15% promotion to complete their orders. However, because of each business’s potential needs, and because of the newness of the service itself, a sales lift of that much may not be typical. Nguyen admits that the lift can range anywhere form 15% to 40%, depending on the given situation.

Answerbook is currently priced beginning at $50 per month for 500 customers analyzed and then increases in tiers that go from $150/month to $199/month, with an enterprise option in the works.

The company has also raised $700,000 in seed funding from Y Combinator, Kima Ventures, Tamares (a Palantir backer), and a group of San Francisco Bay area angels.

Longer-term, Nguyen says that Answerbook’s goal is to do more than personalize emails, but to personalize the targeted messages customers receive elsewhere, too. In the future, the service will include support for mobile commerce as well, allowing retailers to personalize their in-app push notifications and even SMS texts.