Kickstarter says that the roughly two-hour-long outage that took place today was unrelated to the massive traffic sent to its service by those backing the Pebble smartwatch’s latest, and now record-breaking, campaign. According to a company spokesperson, it was only a coincidence that the Kickstarter website went down today, even though yesterday was one of the company’s “biggest traffic days ever,” they noted.

The company first publicly acknowledged the site issues around noon Eastern today via a tweet, after a number of users took to Twitter to complain about the popular crowdfunding site being unresponsive, and showing a “503 Service Unavailable” page upon visiting the Kickstarter.com domain.

The most popular theory we saw, which some news outlets, including CNBC, even hinted at, was that the service buckled under the load of traffic that Pebble backers sent the site over the past day.

Did … did Kickstarter get slashdotted?

In case you missed it – the smartwatch maker Pebble returned to Kickstarter on Tuesday to run a crowdfunding campaign for its new hardware, the Pebble Time, a thinner and lighter version of its flagship smartwatch which features a color e-ink screen, better power consumption, voice control, and a bigger focus on notifications over apps.

To say that the new watch was met with an enthusiastic response would be an understatement.

The Pebble hit its $500,000 funding goal within just 17 minutes. Nine hours after the launch of the campaign, it had raised $6.5 million, earning it a spot in the top 5 most funded projects. And it’s worth pointing out that those campaigns that pulled in more funding did so over a month or longer – not in under a day, as Pebble did.

Today, as of the time of writing, Pebble has climbed to $9.3 million in crowdfunding, and the numbers are still inching upwards.

Kickstarter’s site returned to normal operations shortly after 2 PM EST, according to another company tweet as well as the Kickstarter status page. 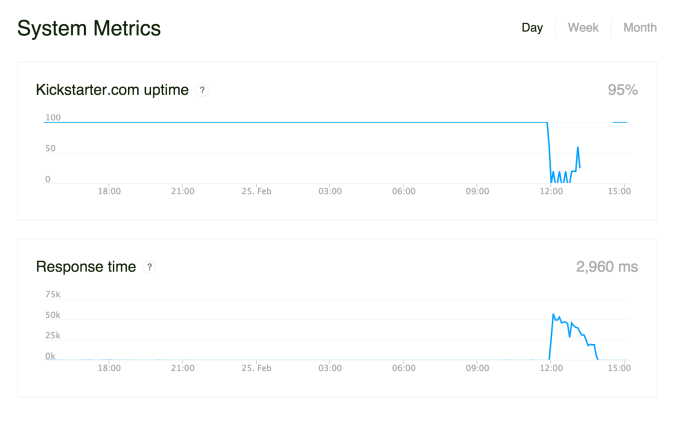 The company is currently declining to detail the nature of the outage, saying that engineers are still “heads down,” only noting that it was unrelated to the Pebble campaign. Performance on Tuesday, amid the flood of traffic, had remained steady, we’re told.

Kickstarter sometimes does post mortems on its engineering blog when things like this occur, but it’s not yet clear if it will do so today. If and when more details are provided, we’ll update here.