From Facebook-owned WhatsApp and Apple’s iMessage, to startups like Kik, and Telegram, it is easy to think the social messaging market is all sewn up.

Then there are photo and video-focused apps like Facebook’s Instagram, Twitter’s Vine or upstarts Coub, DubSmash, Prezi’s Nutshell, and MusixMatch’s Clip, which look to enhance the social messaging experience.

However, with fairly low barriers to entry, there’s little stopping new entrants who remain determined to grab a slice of the social messaging and media pie.

Founded by siblings Jay Amlesh and Serag Gazal, two computer science graduates from the University of Manchester in the UK, Txtter is one such startup that thinks it can bring something new to the table.

The iOS app, which only last week launched in Beta, has two specific tricks to its wares, in addition to standard messaging features: photo-sharing via your Txtter profile, which is a bit like having your own contacts-only Instagram feed, and an iteration on the typical sign up process that combines the anti-spam measure of mobile phone number verification with the privacy afforded by usernames. 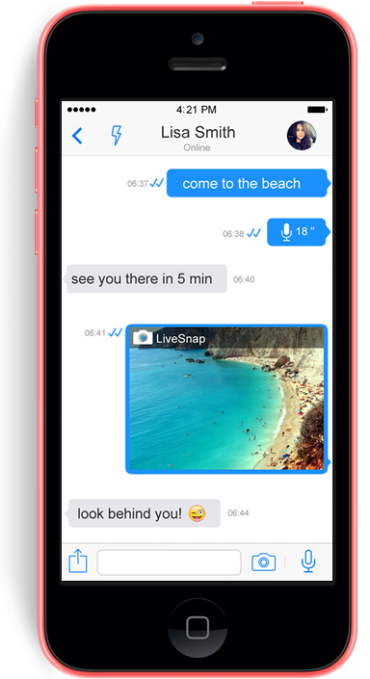 The former means you can add photos to your Txtter profile, which are displayed in a grid. Then any contacts you add can browse your photos or visit a corresponding status update and photo activity feed. Photos can be ‘hearted’, too, although the ability to comment is purposefully missing.

“We’re evolving the messenger to allow people to share photos quickly, easily and privately with friends and families,” explains Txtter co-founder Jay Amlesh. “Another problem is comments on photos makes many users reluctant to share pics of themselves and are prone to cyber-bullying, especially teenagers, they’re also vulnerable to fake accounts on Instagram connecting with them. Our app is safe and teen-friendly.”

Txtter’s sign up process also reflects the startup’s thinking around safety and privacy, specifically negating the need to hand out your phone number to everybody with whom you wish to connect, but still using it as a form of authentication.

“We also have a sign up method that hasn’t been done before,” claims Amlesh. “We think email and password style signups, such as Kik, creates many fake accounts and spammers, and the problem with phone verification signups, such as WhatsApp, is that if you don’t feel comfortable giving your number to others then you have to use a different app. We solved both problems by having phone verification followed by choosing a username.”

Whether or not this will be enough for Txtter to make a dent, remains to be seen. I have my doubts. Three days after hitting the iOS App Store, the app has garnered 2,400 registrations.

However, given a message app is viral by nature, Amlesh tells me he’s encouraged by the way Beta users are inviting friends and sharing a link to the app on social media. “Sometimes the world doesn’t know what it needs, until something comes, then the world realises it needs it,” he says, perhaps rather hopefully.