Only a month ago, Tumblr upgraded its writing interface to better compete with newer blogging platform Medium, best known for its long-form content. Today, Medium is turning the tables and moving into Tumblr’s territory instead with a series of changes that encourage writers to share stories of any length – even shorter posts and incomplete thoughts.

Explains Medium via a blog post announcing the news: “We know that length is not a measure of thoughtfulness.”

The company says that sometimes writers just need to get a thought out there in order for it to grow.

Medium’s distraction-free, full-screen editor has helped the company attract those who wanted a clean and simple writing environment which, by its very nature, lends itself to longer articles, essays and journal entries. But on the other hand, a company that limits itself to the niche audience of long-form writers in the age of BuzzFeed can only grow so far.

In order to reach a broader, more mainstream user base, it makes sense that Medium would want to make itself more accessible to casual bloggers who just want to jot down shorter thoughts.

To move in this direction, Medium has added an inline editor, which is a new way to post to the service. Available directly on the homepage, the editor lets you start writing immediately in a box that’s only a bit larger than your typical social media network’s status update field.

Now, next to your profile icon the words “Write Here…” appear faintly in a white space. And when you click into this box, it expands only slightly giving you the feeling that you’re posting amid a News Feed-like stream of updates, rather than having to craft some longer, more involved thought piece.

In fact, this stream of posts is also new today. To complement the inline editor and encourage shorter missives, the post listings have been transformed into a stream. This allows you to get a sense of what a post is about without having to click through and read it, says the company. Meanwhile, for shorter posts, you can recommend them to others right from the homepage. 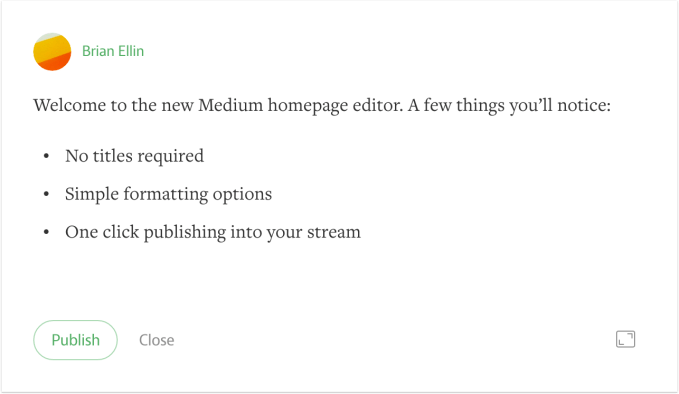 The new inline editor still includes the editing tools hidden behind the plus “+” icon, which let you do things like adding rich media or other embeds to your post. And you can still highlight your text to change the font style or formatting. But the pressure of having to write a lot before publishing to the site is removed.

Of course, if you start writing and find that your thoughts are running away with you, a click of the button on the bottom-right side of the inline editor will expand the window into the full-screen editor for the traditional Medium writing experience.

The company has also made changes to the way Medium users discover new things to read. Before, the site featured Channels (categories) like “Tech” or “Art,” for instance,  but now posts are organized by tags that are added by the author and then made available on the right side of Medium’s homepage in a “Featured Tags” section. This allows users to click into their preferred category, while also potentially giving authors more exposure for their work as they can now add up to three tags per story. 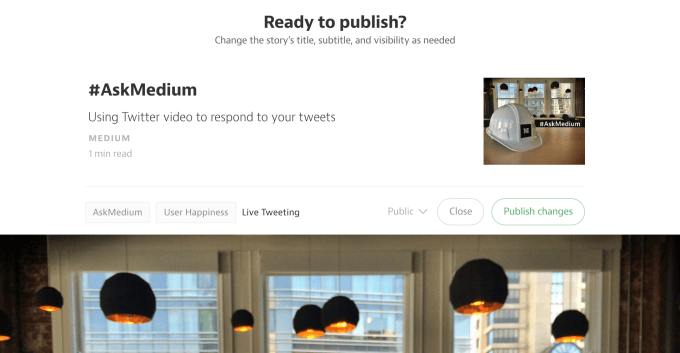 Tagged posts will be distributed to the various tag pages on Medium, which is now another area content can be discovered.

Right now, the “Featured Tags” section includes those that fairly well match up with Medium’s old categories, but the company says that it will begin rotating trending tags into this section as well.

User profiles are upgraded, too, and now let you pin a favorite post if you choose. Otherwise, Medium will pick a featured or most recommended post followed by shorter snippets of your other stories.

Already, the changes are being embraced by Medium users who have posted short thoughts that are not much longer than tweets, in some cases, to their Medium blogs.

Jokes Mashable’s Brian Ries, “Please let this kill the TweetStorm™” – referring to some users’ penchant to post lengthy thoughts to Twitter by numbering their tweets in the order to be read. Meanwhile, writes investor and author Steve Garfield, “now I can publish to Medium without having to write a magazine article.”