A new video messaging app, Pop, founded by Josh Nguyen, who previously ran product at both Tumblr and Flickr, is launching today to make video messages as easy to send as traditional SMS. Using a simple, one-screen interface, Pop connects with your phone’s address book and lets you send out a short video with just a tap, even allowing you to add colorful filters on top of the message itself.

“We brighten [the video] and contrast it,” he explains. “One of the things we heard from our friends is: ‘oh, I hate being on video because of how I look,'” Nguyen says. The way the message in Pop looks helps people get over the idea that they need to craft an image of themselves in order to appear on video, rather than just being able to relax and talk normally.

The idea for the app, which is also co-founded by Alaric Cole, a video expert and app developer who met Nguyen while at Yahoo, came about largely because Nguyen felt like he was losing touch with his friends, and social media wasn’t a good substitute.

“I found I was getting the Facebook resumé version of their lives,” he tells us. “I wasn’t on the phone anymore…I don’t know when the last time I had a phone conversation was.” Meanwhile, most of our “chatting” with friends these days takes place over text messages, but there’s a limit to how much can be expressed in this format, even when you add things like GIFs and emojis into the mix.

Today, there are a few asynchronous video chatting apps on the market. Glide, for example, is one, and Skype’s new spinoff Qik is another. However, Nguyen feels none have yet to really make the experience as simple and quick as it could be. Sending video is still something that’s not as convenient as texting – which is why over 80% of cell phone users say they’ve sent or received texts, but only 21% have participated in a video chat, according to a Pew Internet study. 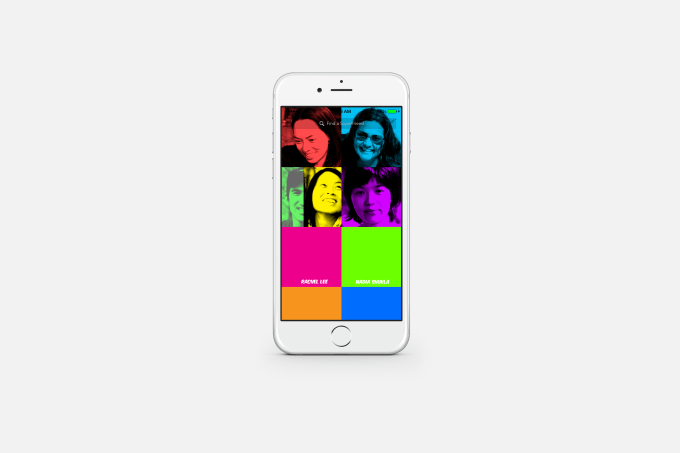 To use Pop, there’s no involved sign-up process. You just enter your phone number and confirm your account via the verification code, similar to a number of mobile messaging apps. Then, after adding your contacts from your address book, you simply tap on a friend’s name to send them a video message. If they’re not on Pop yet, they’ll receive an SMS notification with a web link to the message. This text also includes a GIF version of your face, which Nguyen hopes will make the message seem more personalized, and less like spam. (Unfortunately, in tests, my sister deleted my message immediately because she assumed it was spam. So, as they say, your mileage may vary.)

The videos themselves are only five seconds long, which helps to keep the content short – much like texting. And unlike a number of mobile messaging apps, the content doesn’t disappear after it’s viewed.

After a few back-and-forths with a friend on Pop, the end result is a longer conversation which you can also swipe to go back to and listen to again.

“I don’t think anyone has really executed to have an app that’s simple to talk with your friends on video” And, he says, it’s not only about being simple. The app has to be “cheap and accessible,” too. “If your friends aren’t on it, then why even use the app, right?,” says Nguyen.

Pop is currently backed by a bit of friends and family-type funding in the low six-figures while the team continues to experiment with the product.

The app is live in the iTunes App Store as a free download.