You know all that big data that’s streaming into your company from sensors, customers, social media, Excel spreadsheets, and data sources all over the internet? Microsoft wants to help you process all of it, build APIs and make use of that data in the cloud with machine learning technology.

And to that end, Microsoft officially announced at the Strata Conference today, the general availability of the Azure Machine Learning service for big data processing in the cloud. It also announced some enhancements to the platform since its Beta release in June.

As we wrote in June, “The product is built on the machine learning capabilities already available in several Microsoft products including Xbox and Bing and using predefined templates and workflows has been built to help companies launch predictive applications much more quickly than traditional development methods, even allowing customers to publish APIs and web services on top of the Azure ML platform.”

Joseph Sirosh, corporate vice president at Microsoft, who is in charge of the Azure ML, and spent years at Amazon before joining Microsoft to lead this project, said the latest version supports Python in addition to the popular R.

“We have added Python, which is a big favorite of data scientists. There is a huge ecosystem for this,” Sirosh told TechCrunch.

He said this capability will be powerful for data scientists. “We made a lot of improvements and adding Python was part of that. Azure Machine Learning is the platform. You can copy a bit of Python code and plug it into the studio and create an API,” he explained.

In addition, the platform now supports Hadoop and Spark, giving it a fairly comprehensive set of tools for processing big data, regardless of your platform of choice.

The real strength of this platform is the ability to create APIs and begin processing data very quickly.

“The cloud solves the last mile problem, Sirosh explained. Before a service like this, you needed data scientists to identify the data set, then have IT build an application to support that. This last part often took weeks or months to code and engineer at scale. He says Azure ML takes that process and provides a way to build that same application in hours,” as we wrote in the June article.

Sirosh was clearly excited describing the range of choices available. “Data scientists can publish APIs with a few clicks. Applications can include R code, python code [or a combination]. It’s such an incredible selection of capabilities,” Sirosh said.

He said while competitors like IBM and SAS offered a range of services, he claimed none of them offered it in this integrated fashion that Azure Machine Learning provides its users.

“This is an integrated tool set that’s fully managed,” he said. “You don’t have to install hardware and software and you can do advanced learning and analytics.”

In addition to providing tools for big data processing in the cloud, Microsoft is also offering a marketplace where people can share applications and APIs they have created. Sirosh says this is a great way for data scientists to test their ideas publically. 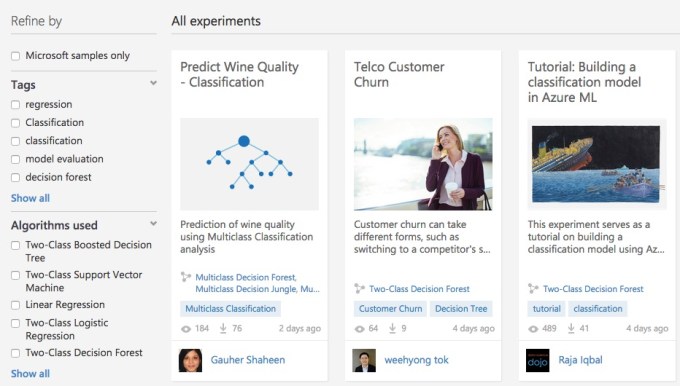 The marketplace has more than 20 starter experiments today, but Sirosh sees it as having tremendous potential. He believes over time the vast majority of enterprises can meet their big data processing needs by finding the right tool in the marketplace.

“When Azure Machine Learning arrives, it’s so easy to use, and the cost of producing an API is so low, it becomes easy for data scientists and developers to make fully machine learning APIs in the cloud,” he said.

In terms of visualizing the data, the platform has some built-in capabilities, but it’s also compatible with Microsoft Power BI and IPython Notebook for further plotting and visualization of processed data.