A company called Elemental Path is developing a new line of smart toys for children which will be powered by the super computing system IBM Watson, enabling the toys to engage in real and personalized conversations with kids, and evolve with the child as he or she grows. CogniToys, as the toy line is being called, is today introducing its first entry into this space, with a smart dinosaur toy that supports full speech recognition and can chat with kids, tell them jokes and answer a wide variety of “who,” “when,” “where” and “why” questions.

The startup is now live on Kickstarter with the goal of raising $50,000 to take the toys into production.

Co-founded by Donald Coolidge and JP Benini, previously of software development shop Majestyk Apps, along with Arthur Tu, Elemental Path came about after the team won a developer competition which allowed them access to the IBM Watson technology, making them the first toy company to be able to tap into the system.

While none of the co-founders have kids themselves, they believed in this idea of “connected” toys to both entertain and educate children.

“We felt it was the right time for something like this to happen,” explains Coolidge. “Kids are using iPhones and tablets much more than most parents would like them to, when the benefits are not very clear,” he says. With CogniToys, the technology is instead inside the device and the toy gets to know the child, engage the child, and includes a variety of specific educational content that’s infused into the interaction. “It provides educational benefit, beyond just the play,” Coolidge notes.

The early prototypes of the CogniToys dinosaur were printed using a 3D printing system, but when they come to market, the toys will be made out of a soft, texturized rubber – similar to that of a LeapFrog tablet. On the toy’s front, there’s a big button that, when pressed, begins the interaction. 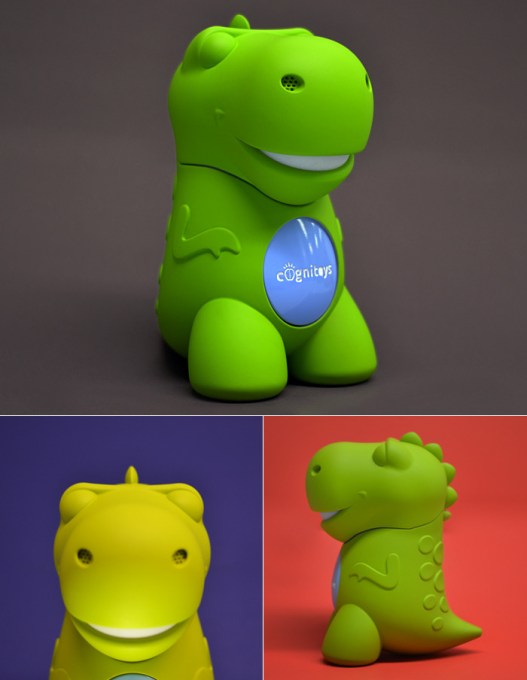 Inside, the technology is lightweight. There’s only a speakerphone, microphone, battery pack, and a small piece of hardware that connects to the cloud.

“As a connected device, we’re really doing all the processing in the cloud. The benefit of that is that we can launch a more affordable toy,” explains Coolidge.

With the IBM Watson-powered system, the toy is able to listen and respond to questions and return its answers quickly – within a second or much less, the company claims.

And due to its connected nature, the toy becomes smarter the more it’s used both by the child him or herself, and by all the toys’ owners combined. For instance, a caching layer helps to speed up responses for questions that have already been asked before, and the toy’s content can be updated in real-time. That can help when children ask questions that have never been asked before. As the system’s content is updated, the next child to ask the same question will now have an answer.

Aimed at those ages four to seven, the toy can be customized to its owners. For the toy’s younger users, the system offers activities like jokes and storytelling, while older kids can ask it more specific questions, including questions about educational content, like math. The team also points out that the toy doesn’t answer everything a child might ask, as they’ve programmed in what they’re calling “mommy questions.” For example, if a child asks where babies come from, the toy tells them to go ask a parent instead.

Meanwhile, parents can customize the system with some basic information like the child’s name and age, and they can then monitor their child’s learning progress in real-time, using a cloud-based connected dashboard.

While the Kickstarter launching now will allow early adopters to purchase the toy starting at $99 or a two-pack for $190, the company’s longer-term vision is to focus on the technology’s development, not the actual toys themselves. The end goal is to license what they build to be the “brains” behind other physical toys, and they tell us that initial conversations with toy companies are already taking place. The software could be used in other applications as well, including kids’ apps.

Based in Manhattan, the startup has a small amount of funding from friends and family, but will likely raise a seed round in the future.

The toys are expected to begin shipping on November 1st.