Who should live and who should die? Every day, thousands of patients across the United States put their lives into the hands of trained medical professionals, relying on the skill, experience, and intuition of these experts to safely regain their health. Medical doctors are strictly licensed, required to go through years of rigorous academic training and apprenticeships before they are allowed to operate autonomously.

Should you buy daffodils or chrysanthemums? While hardly a life-or-death question (except perhaps yesterday on Valentines Day), florists in Louisiana can’t simply open a shop and begin providing floral advice. In decidedly un-floral language, the state of Louisiana requires a license to be a retail florist, demanding a written exam before one is allowed to “arrange and sell floral designs, cut flowers and ornamental plants.”

Whether doctors or florists, occupational licenses have grown incredibly common in the United States, encompassing possibly more than 1000 professions and covering some 29% of workers.

How can such a harmful system continue to have so much political support? Money, of course.

Now, you might be thinking, “Gee, I’m completely hung over from last night because I am a) dating someone or b) single. Why should I care about licensing and not, say, 50 Shades of Grey.”

Fair question! Thanks to the way that occupational licensing is administered, there are 51 Shades of Licensing – and the rules are equally torturous. These licenses are pretty much exclusively administered by state governments (plus DC), meaning that there are 51 different ways that licenses, certificates, and registrations are regulated.

I mean, have you seen the cosmetologists from Florida? No way they can cut Georgian hair.

For Silicon Valley, that complexity directly undermines every startup hoping to provide services across the United States. Want to build a network of florists? You have to check the licensing statutes in Louisiana. Want to start a service to offer mobile home installation? Some 39 states demand a license. Makeup artists? Better check the law in 36 states.

Perhaps no company better evinces the struggles over licensing than Uber, which has fought tooth and nail against commercial driver regulations across the country – and around the world. Now imagine several dozen startups trying to target the next set of industries to be disrupted (security guard – 37 states!) and we begin to see just what a mess these rules have made for all of us.

Occupational licensing is the 50 Shades of Grey of policy – it’s disastrous, and leaves you with a bad feeling after you read about it. The harm is real, and one profession as we will see is literally immune from any reform whatsoever. Startups have the power here to build the next billion dollar businesses, but first they will have to fight in the underbelly of state capitals just to hang out their shingle.

First, Do So Much Harm

Morris Kleiner, a professor at the University of Minnesota, has been studying this system of occupational licensing for years. The numbers he has compiled in his most recent report are staggering. Economists estimate that roughly 2.85 million jobs are non-existent due to occupational licensing requirements. The lack of available service providers raises costs for everyone, causing an estimated $205 billion in lost economic activity.

Economists have studied the effects of licensing to see if they lead to better outcomes, and the answer is almost certainly no. Louisiana residents are not receiving better floral arrangements because their state licenses their florists, although the state’s costs for flowers are significantly higher compared to neighboring Texas.

But maybe health and safety concerns play a role here. After all, we don’t want any person with a white coat and a stethoscope to be offering medical services to unsuspecting patients. But the logic stops as soon as we evaluate what is happening with these processes across state lines. Writing in his report, Kleiner says, “In a rational occupational licensing system, for example, it is difficult to justify why Iowa would have twice the percentage of licensed workers as South Carolina, Rhode Island, New Hampshire, or Indiana.”

Medical doctors undergo extensive training that is relatively uniform across the United States. Then take cosmetology. Kleiner notes, “Iowa requires 490 days of education and training to become a licensed cosmetologist, but the national average is 372 days, and New York and Massachusetts require only 233 days.” If there were safety objectives, shouldn’t all states want to be equally safe?

These differences between jurisdictions have serious downsides, particularly for worker mobility. Licenses and certificates received by one state are often difficult to transfer to another state. This is particularly damaging for our poorest paid workers, since economists have shown repeatedly that mobility is one of the most efficient routes to income growth.

How can such a harmful system continue to have so much political support? Money, of course.

Licensing ensures that professions have a monopoly over their craft in a given jurisdiction. By limiting the number of entrants into the field, licensing can ensure that workers receive higher wages by artificially limiting competition. Few politicians want to change a law that directly affects their constituents’ pocketbooks, and so we see constant growth of licensing requirements all across the country.

That increases the difficulty of startups and innovative firms to offer new products and services legally, particularly when those services cross state borders. Uber is the obvious example, since they are one of the first to directly fight through the thicket of these regulations. But any startup that hopes to provide marketplaces for workers outside of the tech industry is going to run into them.

And Uber is informative also because its results remain inchoate. The legality of Uber in many jurisdictions remains contested. While it seems clear at this point that the company is going to come out of all of these fights in victory, it is not as clear that another company could get through the regulations as easily. Regulators are much more aware of Silicon Valley disruption than they were in the past, and are ready to use the tools at their disposal to stop it.

The Most Powerful Profession In The World 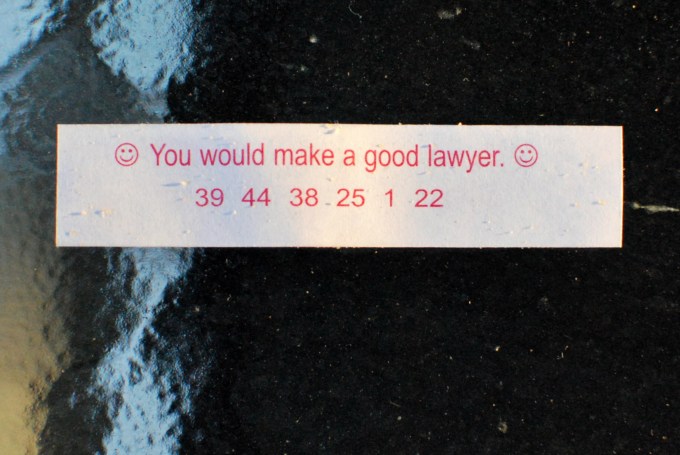 Even if startups can break through and offer more convenient and cheaper services, one profession remains completely untouchable: law.

You might be surprised to hear this. After all, the difficult employment situation in the legal industry has been constantly in the news. Young attorneys graduating from law school are mired in debt and are increasingly unable to find the kind of well-paying big firm jobs that might pay it off. Middle-aged attorneys are facing layoffs as the industry continues to consolidate.

Since the global financial crisis, there have been large changes to the legal market, including greater demands from clients for cheaper fee structures, and some technology improvements to areas like discovery (when both sides look for evidence to bolster their cases). But the fundamentals of the industry remain identical to what they have been for decades.

I want to press a button for everything.

This will never change.

Unlike florists, who don’t write the laws controlling their profession, lawyers have the power of the law in their hands. The state bar associations, which license attorneys within their jurisdictions, are administered by each state’s supreme court. Want to pass a law to change the credentialing of lawyers? Well, it would have to pass constitutional muster with the court system (i.e. the very regulators we are hoping to reform).

In other words, good luck.

Gillian Hadfield, a professor of law at USC, is a leading researcher of these sorts of legal market regulatory issues. When it comes to reasons to reform the current system, “We don’t have a quantity problem with lots of lawyers trying to find work,” she told me, arguing that access to lawyers remains a challenge for large swaths of the U.S. population. Instead, she argues that the biggest problem with the current system is lack of innovation. “One of the key things you need for innovation is diverse participation and problem solving,” she says.

Law firms all operate in similar ways, preventing innovation. For instance, law firms must be wholly owned by lawyers, rather than, say, venture capitalists. That creates significant difficulties for startups looking to offer new legal services, without any sort of obvious reason why one set of owners is better than another. According to Hadfield, some startups have even had to sue bar associations over their policies. She describes it as a “completely opaque process and without due process unlike other regulatory agencies.”

As a Roman poet might say, “who will guard the guardians?”

Can Startups Fight This Battle?

Law may be the extreme example, but clearly, our labor system has significant problems. That’s both the bad news, and also the opportunity. It is clear that the accumulation of these occupational licensing regulations has made some fields completely immune to market forces, which provides an entrée for a indefatigable entrepreneur to rebuild a better market.

Ultimately, we need to champion the consumer, who is suffering under the weight of these regulations to the tune of $205 billion a year.

It’s not impossible, and it is already happening in law, albeit to a small extent. Matt Faustman is a founder of UpCounsel, an on-demand legal service, and he has seen first hand the battles that have been waged over these regulations. He is decidedly optimistic about the trajectory of the issue. “More and more people feel that they can get professional services in an easier way, and the things that have traditionally kept it back like regulation are really starting to butt up against these changes in the economy.”

He notes that airlines were once incredibly regulated, but have gone through a process of deregulation that has made prices far more affordable without harming safety. He sees that as a pattern. “A lot of people are worried about deregulation and getting a lower quality experience, but that hasn’t really been the case in a lot of these hairy industries,” Faustman said.

Hadfield believes that more changes are underway as attention to the issue picks up. “It is such a closed system that there hasn’t been a lot of pressure on [regulators],” she said. “I do think it is going to shift, and part of it is the growing legal tech community.” She points out that Washington state has become the first in the nation to allow workers without law degrees to practice some of the craft in positions known as limited license legal technicians.

Law may be a microcosm, but it is emblematic of the changes underway in our labor markets today. With technology like smartphones and cloud services increasingly reaching saturation, there is increasing desire from everyone to change the way we get our services. I don’t want to have to flag down a cab when I can use GPS and push a button. I don’t want to have to call ten legal offices when I can press a button and get immediate legal help.

I want to press a button for everything.

Reinventing the service economy will easily create the next several billion dollar businesses, if only we can get through the cruft of regulations that has almost no basis in good policy. We need to partner with legislatures to change what we can, and we may need to be more aggressive when entrenched interests prevent change. Ultimately, we need to champion the consumer, who is suffering under the weight of these regulations to the tune of $205 billion a year. It’s time for 51 Shades of Licensing to go out of print.