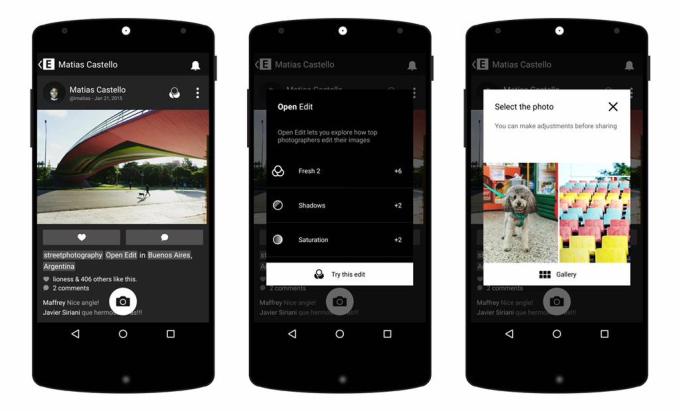 Photosharing startup EyeEm has brought its Open Edit feature to Android. Originally launched on iOS in mid-December, Open Edit lets users see exactly how others got to their final edits and apply the same changes to their own photos.

While the interface features new animations based on Google’s Material Design, the user experience is still mostly the same as in the iOS version:

At the bottom of your screen are two sliders — one with the list of parameters you can edit, and another that lets you make edits by dragging left or right.

When you try someone else’s edits on your own photo, the app quickly shows you how each parameter that was changed contributed to the final look in a step-by-step animation. Then, small indicators show up under the buttons on the slider that were changed. You can easily revert certain settings back to how they were originally or push the changes even further.

Open Edit takes only a bit more work than trying out different filters yet manages to teach photography fundamentals to those willing to fiddle with it for a few moments now and then. It’s a very clever user experience, and I’m excited to see what EyeEm does with it given that the company is working to train its algorithms to understand what makes a photo visually appealing.

As part of its push for creative and collaborative editing over preset filters, EyeEm is introducing an “Edit of the Year” category at the 2015 EyeEm Awards being held in New York City in September. Last year’s show/festival brought in more than 100,000 submissions, so the startup is hoping it’ll encourage more users to opt-in to letting people see their process. It’s tricky, because some of the app’s most avid users consider the final edited photograph to be the actual piece of art and don’t want to show off where a photo started.

Of course, there’s also a business reason to get people using custom edits over preset filters. EyeEm’s trying to build up a marketplace for those willing to sell content they post in the app, and offering up pictures with unique looks provides further differentiation between their own photos and more traditional stock-photo services.