On the heels of a plan to restructure its business to focus more on programmatic advertising and its bigger content brands, today AOL reported its Q4 earnings that show it still has some way to go on that front.

The company (which owns TechCrunch) reported revenues of $710.3 million and adjusted EPS of $0.92. This was a mixed result: analysts were expecting revenues of $721.8 million and EPS of $0.72, with advertising sales of $557.9 million and subscription sales of $148.2 million. As you can see below, subscriptions (which include businesses like AOL’s legacy dial-up) actually performed better than expected, meaning the shortfall was in ads.

As the market opened, AOL’s share price was down nearly 12% on the results.

Adjusted OIBDA was $157 million, $4 million above estimates of $153 million, while GAAP earnings per share was $0.73, also beating estimates.

Breaking out how different segments are doing, display revenues were up by only 1%, excluding brands that have closed down in the year such as Patch, while overall global ad revenues were up 8% on the year on increasing pricing. Third-party property revenues continued to rise, now up by 16%, while search was also up by 6%.

Programmatic, AOL said today, accounts for 39% of the company’s ad revenues as of Q4, and this is also the first quarter where AOL Platforms is profitable, passing $1 billion in revenues for the full year.

AOL Platforms, where a lot of the ad business sits, is up by 20% on revenues to $330.6 million of the total, and is the only segment that grew its sales. Membership/subscriptions was down by 7% and the Brand Group (where properties like TechCrunch, Engadget and Huffington Post sit) was down by 1%. AOL noted that, excluding the Patch closure, revenues in Brand were actually up by 4%.

But when it comes to adjusted income, subscriptions/membership continues to be the stronger business, reporting $141.5 million to Brand Group’s $36.5 million and Platforms’ $13.5 million. 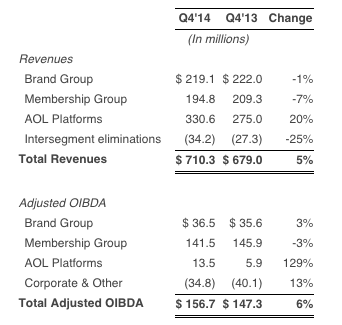 The company ended out the quarter with 2.2 million subscribers, with an ARPU of $21.18, the company said. The total number of unique visitors in the U.S. was 197 million across AOL’s properties on different platforms, while desktop-only was 107 million.

In the last few weeks, information has been slowly trickling out about the company’s plans to close down underperforming web sites and to lay off staff.

That has included closing down the standalone operations of TUAW.com and Joystiq among tech publications, and also laying off around 150 people. Many of the layoffs were in the area of sales, where AOL is shifting to more programmatic and platform-based ad selling, and therefore cutting back on staff working on legacy ad products.

On that subject, CEO Tim Armstrong had this to say in a statement with the earnings: “AOL’s global team delivered our second consecutive year of growth in revenue and profits – while we lowered our expenses. AOL is building leading assets in the fastest growing areas of media technology and we are aggressively moving the company forward in 2015.”

Many of the “lowered expenses” changes should not come as a surprise. Armstrong hinted that there would be restructuring during the Q3 earnings call in November. In that quarter, AOL beat analysts’ expectations on sales of $626.8 million but fell short on adjusted income — a sign that while the company’s new wave of advertising continues to be a revenue rocket, it’s not yet proving to do the same where profit is concerned.

Anthony Ha will be speaking with Armstrong later and will update with more news then.