Hackers have screwed Snapchat several times and now the startup is taking aggressive action to keep it from happening again. Yesterday, Snapchat cut off access from music video sharing app Mindie citing its security policy. The company confirmed the enforcement to me, and said it reset the Snapchat passwords of anyone who’d given Mindie their credentials. Unfortunately, that’s left a lot of confused Snapchat users locked out of their accounts until they register a new password.

While Snapchat had previously gone after rogue apps like Snapsaved that let people circumvent its screenshot warnings, Mindie is a much more mainstream, venture-backed company. While security was the reasoning here, the move also brings up the question of how Snapchat will deal with apps that let you post polished content rather than only creating snaps with its native tools. 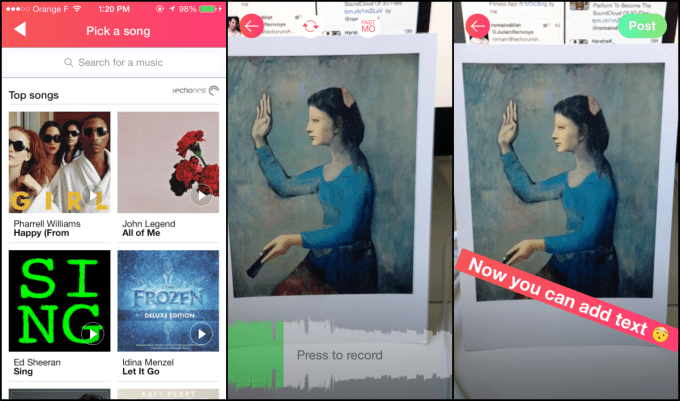 Snapchat’s security problems started at the end of 2013 when it ignored warnings from security researchers at Gibson…and was then promptly hacked. Millions of users had their phone numbers and usernames posted publicly. Snapchat CEO Evan Spiegel was reluctant to say he was sorry, but eventually apologized under the weight of widespread criticism.

But once Snapchat had thwarted the phone-number-matching tactic that caused the breach, hackers went after unofficial third-party apps. The app stores are littered with scammy products claiming to let you screenshot other people’s snaps without them knowing. To use them, you have to log in with your actual Snapchat user name and password.

When one of these third parties, called Snapsaved, was attacked in October, hackers scored hundreds of thousands of people’s photos, allegedly including underage nude photos. Snapsaved took responsibility, but Snapchat literally could not even. In November, it formally reiterated its ban on unofficial third-party apps, started blocking some, and told people using them to reset their passwords. Google began removing some of the offending apps from its app store.

But Mindie wasn’t some sketchy screenshotting app. It’s backed with $1.4 million from top funds and angels like Kevin Colleran, SV Angel, Troy Carter, Betaworks and Slow Ventures. Mindie lets you pick a song as a soundtrack, and then shoot an accompanying video for sharing on other social networks. Music makes anybody’s crappy videos look more artful, and it’s found a popular following.

I know some Facebook employees have shown deep interest in Mindie. That makes me wonder if the improved rich media capture features Mark Zuckerberg promised for Facebook will include soundtracking, or if the tech giant might acquire Mindie. 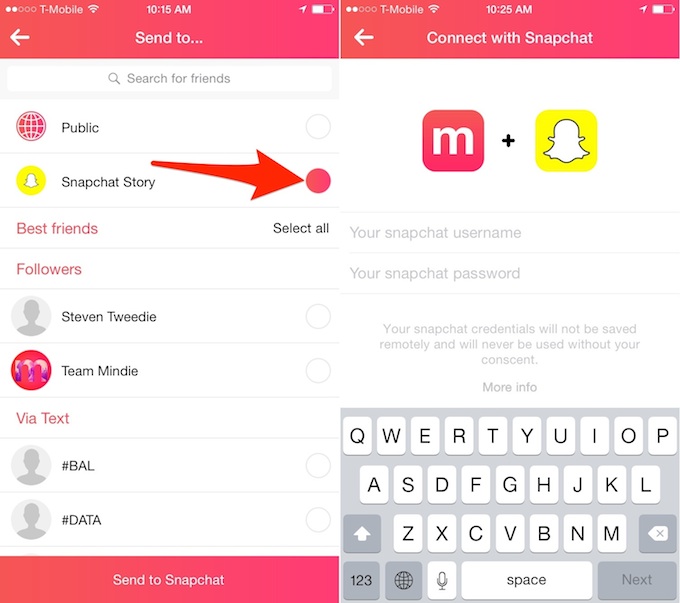 One particularly unique feature of Mindie was that you could share videos you made to your Snapchat Story, the semi-public broadcast storytelling feature that’s become a hit with star creators from YouTube and Vine. Normally you have to shoot anything you add to your Story inside Snapchat.

Mindie let you bypass that rule and share its glossy, filtered, soundtracked videos on Snapchat. Product Hunt CEO Ryan Hoover was fond of posting Mindies. But that’s not going to happen anymore.

Because Mindie’s been cut off.

Some users who got their passwords reset are confused about whether they got hacked, since that’s normally why people get password reset notifications, or are pissed the Snapchat Story sharing feature is gone.

Mindie tried to explain what happened and is now lobbying for Snapchat to reinstate it:

2/ We don't store your credentials remotely and no information has been compromised.

4/ Help us get Mindie back on Snapchat! #bringmindieback

While Mindie claims to have better security standards than the other apps Snapchat banned probably did, Snapchat’s decision is understandable. More hacking incidents could shake faith in the platform, so it’s willing to do whatever’s necessary to prevent that, even if it means banning white-collar apps.

But there’s also an important cultural side-effect from Snapchat blocking third-party apps: it levels the playing field of creation.

If everyone has to make their Snaps inside Snapchat, it’s more about your wit, photography chops, and drawing skills than what other apps you have. Both Instagram and Vine have been overrun by immaculately produced photos and videos made in professional editing apps. Seeing those creations can make the average user feel like their content is inferior.

That’s probably how some Snapchatters felt seeing Mindie videos. By enforcing its ban on third-party apps, Snapchat not only protects people’s security, but also their comfort with sharing imperfect content. That’s the whole point of ephemerality, after all.