In the intervening years since the first message was sent over ARPANET in 1971, corporate messaging hasn’t really gotten much better. It’s gotten bigger and more feature-rich, but the problem of managing collaboration across a large, geographically distributed group of people remains.

Businesses still rely heavily on email for communication and most messaging alternatives, while monetarily successful, still haven’t solved the problem of mass-messaging.

Joining the ranks of Yammer, Convo, et al. tilting at this particular windmill is the new service Teamchat, launched by a long-in-the-tooth startup Webaroo.

Teamchat is one of several mobile apps trying to best their web-based rivals by circumventing the existing market for enterprise collaboration tools and looking to bring a consumer-style messaging service like WhatsApp or WeChat into the corporate world with a few additional features.

Much of these services begin to sound similar and Teamchat takes its lead from technology developers like Waggl in claiming that its best use cases are for posing simple questions to large organizations. 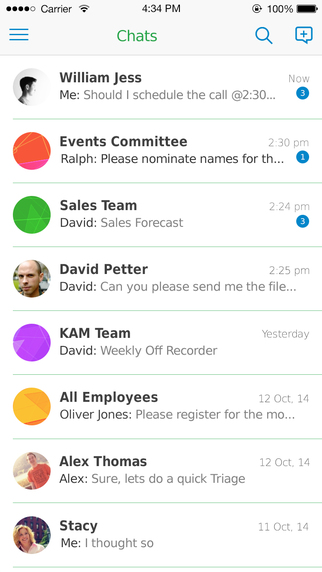 Teamchat’s killer app is its ability to aggregate and summarize responses coming from large organizations, according to Webaroo chief executive Beerud Sheth.

The result of a year of development, the Teamchat app is the quickly greying Webaroo’s latest shot at market relevance.

The company was founded in 2006 as a unified messaging service for text, voice, and video as a service. The company raised $50 million in financing from venture investors including the Indian investment firm Helion, Cambridge, Mass.-based CRV, and Globespan Capital Partners.

The business generated the most traction with its Gupshup service, which was a cloud-based tool for SMS, but that business hasn’t had the pop that the company needs to thrive in a smartphone world. Enter Teamchat.

“We’ve been in mobile messaging before now,” says Sheth. “The previous products were focused on messaging for feature phones.”

Though Sheth wouldn’t comment on the companies finances specifically, he did say that Webaroo was profitable and that it’s generating “tens of millions” of dollars in revenue.

“With messaging on smartphones emerging as a new paradigm, consumer apps have launched in a big way, but we see a huge unmet need on the enterprise side,” says Sheth.

The company is working with a few customers in Asia, concentrating on India, Indonesia and the Philippines.

Using the “freemium” model the company has seen the app downloaded by users at 1,000 businesses, Sheth says.