Messaging app company Line continues to build out its business beyond its core chat experience after it launched a YouTube-like video service in Thailand. The company, which claims 181 million active users worldwide, is evaluating plans to introduce similar services in other markets.

Available via Android and iOS apps and on the web, ‘Line TV’ features a range of TV shows, dramas and music videos from Thailand, Japan and Korea, including critically the acclaimed Hormones and videos from popular K-Pop band Super Junior. Line isn’t saying precisely how many shows or episodes are in its library, but a spokesperson told TechCrunch that it is growing its catalogue on a daily basis.

Line TV is integrated with Line’s messaging app, as you’d expect. For example, users can easily share content with friends via Line, while videos contain information about the actors within them, such as quick links to find and follow their official accounts within the Line messaging app.

With Netflix yet to launch in Southeast Asia, it would be easy to claim that Line is ‘taking on’ the U.S. company with this service, but actually it is more akin to YouTube. The app — which was soft-launched a few months ago — is free to use and doesn’t contain banner ads. Line is initially monetizing the service using some pre-roll advertising.

Line said that it is evaluating future business models for the service. It did not comment on the possibility of a paid-for offering, but the fact that it has its own in-app payment service puts Line in the position to pursue a premium content play at a later date. 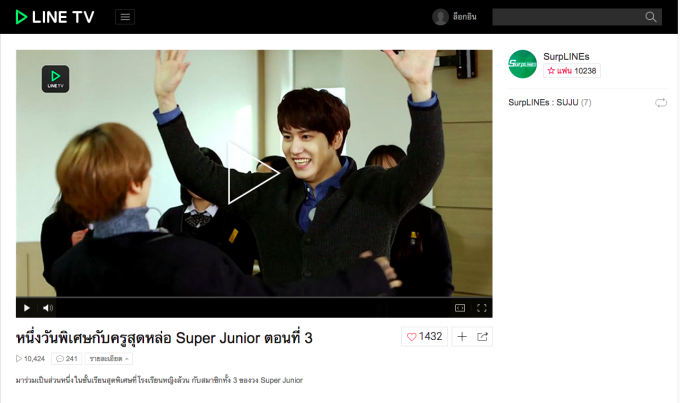 For now though, the company is sourcing content for the service three ways. It is paying a handful of content providers, including as GMM Grammy, to license shows exclusively. Others are providing older content on a revenue-sharing basis.

Finally, Line is working on its own content — which will include tapping into the characters in its sticker sets, which already have their own cartoons and regularly feature in adverts.

Line claims 33 million registered users in Thailand — that’s more than Facebook’s local userbase — and the Southeast Asian country is becoming a real test bed for its pilots. Earlier this week, the company began testing grocery sales and delivery in Thailand. Elsewhere, it introduced its own taxi service in Tokyo last month as it continues to explore offline service opportunities.

Line TV isn’t actually the company’s first foray into streaming services, it has offered a kids video service in its native Japan since last year, but it is the first multimedia venture overseas.

While it is dabbling in video and TV content with this trial in Thailand, Line has already made a bigger commitment to music. It created a joint venture focused on music streaming in Japan in December, and looks like it will extend that focus worldwide after buying MixRadio from Microsoft last year.

As we’ve said before, mobile messaging apps have become mobile internet platforms in Asia. With the likes of Kakao Talk, Line and WeChat used by tens of millions each day, the companies behind them have long offered a range of digital services — including games that hook into social graphs — and the latest trend is to explore offline and multimedia services that tap into the high engagement levels from users.

The thinking here is really why just serve ads to your users when they carry a smartphone that can make payments, play games, hail taxis, watch videos and more?

In case you missed it, Line took home the Crunchie award for ‘Best International Startup’. You can catch up with that, and the rest of the developments from our annual awards show, here.