Twitter’s user count grew a measly 1.4% this quarter, down from 4.8% in Q3 2014, but CFO Anthony Noto said things are turning around. He said the rollout of iOS 8 cost Twitter 4 million monthly active users, and cited seasonality, saying Q4 is historically slow for the company. Specifically, a bug in Twitter’s iOS 8 integration led Twitter to lose 1 million of its own users, and iOS 8 Safari changes cost Twitter 3 million more users.

However, thanks in part to products like Instant Timeline designed to make Twitter easier for new users, Noto said the company predicts that user-count additions will return to levels from the first three quarters of 2014, or around 14 million users per quarter. 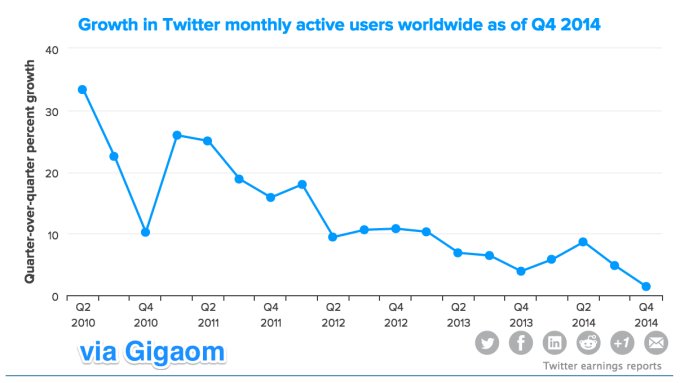 Twitter grew from 241 million users in Q4 2013, 255 million in Q1 2014, 271 million in Q2 2014, 284 million in Q3 2014, and is now at 288 million. As the graph above from Gigaom shows, Twitter’s percent quarter-over-quarter user growth has been rapidly slowing, especially in the last two quarters. QOQ percent growth should naturally decline over time since it’s harder to maintain a percent growth as the total user count grows, but the 1.4% growth of this quarter is alarming. For comparison, Facebook, which is older and much bigger still grew 3.2% in Q4 2014.

But Twitter’s growth could have been more like 8 million users this quarter if not for the iOS 8 problems. 1 million users just never made it to the new iOS 8 version. Twitter execs said “Twitter “There was an unforeseen bug” in Twitter’s iOS 8 integration that caused some users to be unable to open the app. Twitter believes frustration with the bug and normal issues with migrating to a new OS version of its app caused it to lose 1 million users.

There was also a change to the iOS Safari Sharing Links feature. In iOS 7 it would automatically pull in Twitter content for instant access, racking up people as Twitter users. iOS 8 began only fetching that data when users purposefully tried to look at tweets, so Twitter could no longer count those as users.

While winter and a botched Twitter for iOS 8 rollout might have hurt, I have my own theories about why growth is slowing:

Why Twitter's Growth Is Slow:
1. People tried, gave up
2. Starting with 0 followers sucks
3. Many think they lack "important" things to say

For years, Twitter had a piss-poor user experience. The product basically dumped n00bs on the timeline with them not following relevant accounts, no followers, and little instruction as to how to use Twitter. That led lots of people to sign up, get confused, and churn out before they saw the value of the global watercooler.

Building an audience from scratch was tough too. While on Facebook people are accustomed to having a natural social graph from people they know in person. But their interest graph on Twitter doesn’t get benefit from the same built-in audience. No one likes yelling into a blackhole.

This problem is exacerbated by Twitter’s unfiltered feed. Nowadays, most people are following as many people as they can keep track of. This discourages them from following new people for fear of missing tweets from those they already love. If new users don’t have a platform to gain followers, like being a public figure or having a large audience on another network, they can feel unheard.

Meanwhile, new users see early Twitter users and celebrities with thousands or even millions of followers, and look at their own double or triple digit follower counts with disappointment. Unless they have an area of expertise, like some business or humor, they may worry no one will ever want to follow them or their tweets are important. 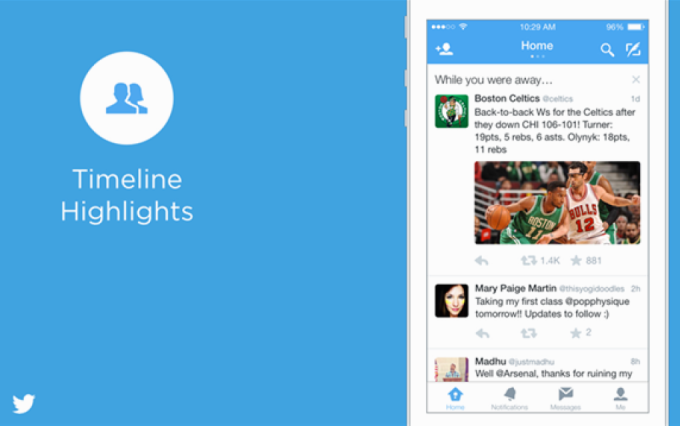 Twitter has begun to fix these problems with a revamped new user experience that does better hand-holding, Instant Timeline which fills first-timers’ feeds with interesting tweets, Timeline Highlights to show top tweets in your network you might have missed, and products like MagicRecs and social notifications that can get rookies more followers.

It will have to hope that those products kick into gear next quarter if it’s going to meet Noto’s prediction and see the bird fly high once again.