Investors are wont to follow. It therefore shouldn’t be a surprise to see Airtame pick up a VC round of funding.

The Copenhagen-based startup, which is building a nifty wireless HDMI dongle to easily share your computer or phone’s screen to a TV or projector, made headlines in late 2013 for its crowdfunding efforts after raising $1.3 million on Indiegogo in just 60 days.

To add to that pot of cash, the company has closed a $1.4 million seed round led by Danish investment firm SEED Capital and Libratone -founder Tommy Andersen — money it plans to use for a full product launch in the second quarter of this year. 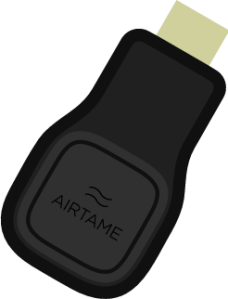 That’s not to say that Airtame devices haven’t already begun shipping. Specifically, I’m told that, of the 15,000 pre-orders that the startup’s Ingiegogo campaign garnered, just over 3,000 units have already shipped to backers, providing valuable feedback to the company as it readies to scale up.

And scaling up is the name of the game here. When you smash through your crowdfunding target in the way that Airtame did, it creates a new set of problems, albeit nice problems to have. Namely, how to scale up manufacturing much faster than originally planned.

“Even though being over-funded is awesome, there’s some downsides to it as well,” Airtame co-founder and CEO Jonas Gyalokay tells me. “In short it can be summarised by the fact that scaling fast is extremely hard – and takes time. Almost all of the over-funded hardware projects get delayed, and I think there’s several reasons for that.”

These include the fact that “hardware is hard” and after receiving so many preorders, your original preparation “goes out the window”. “Entrepreneurs don’t heed warnings,” adds Gyalokay.

To that end, since Airtame’s Indiegogo campaign finished, it’s grown the team from 6 to 17 people, mostly in the area of software engineering. The startup has also signed a partnership with Jabil (the world’s 3rd largest electronics manufacturer), which has enabled it to start ramping up production.