As fashion and technology continue to collide, companies are looking for different ways to build a fashion brand using the resources at their disposal.

In the case of BucketFeet, a startup that just raised $7.5 million in Series A, the company is using the multitude of artists looking to distribute their work to build a new shoe brand. Unlike most ecommerce companies, BucketFeet extends sales to brick-and-mortar retailers like Nordstrom, Bloomingdale’s, and Lord & Taylor, as well as their own studios and pop-up shops.

Artists from all over the world can apply to be a BucketFeet artist and the best works are printed up on BucketFeet’s shoes. All the manufacturing and distribution is handled by BucketFeet, and artists walk away with a minimum of $250 as a down-payment and $1/shoe sold. The minimum run for a shoe is about 1,000 pairs, and BucketFeet cofounder Raaja Nemani said that sell-through was consistently high for the brand, meaning any given artists will likely make at least $1,250 on a single piece of art.

Nemani says that the most highly paid artists on the platform make up to $20,000 on a single print.

BucketFeet started when Nemani was traveling around the world after leaving the finance world in 2008. He got a pair of shoes from an artist/photographer friend, Aaron Firestein in Argentina, that were originally white Converse but had been customized by Firestein with spray paint. Nemani found throughout his travels that people always asked about his shoes, interested in learning the story behind them.

“It wasn’t really about the brand name, it was about the story,” said Nemani. 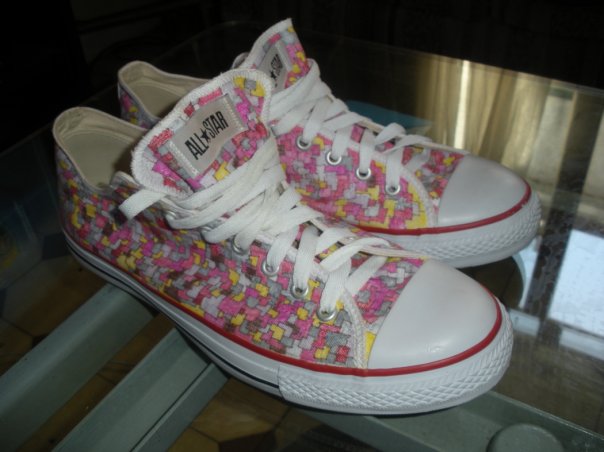 The two eventually got together and launched BucketFeet in Chicago in the spring of 2011. They’ve been growing the artist network since, and now have approximately 12,000 artists vying to get their prints on BucketFeet shoes.

What’s interesting is that part of BucketFeet’s selection process involves social media presence. Most artists on the network have about 2,000 social media followers, and collectively the BucketFeet artist network has more than 24 million followers on social media. The idea is that the artists are brand ambassadors, pushing sales to the demographics who are most likely to buy them, their fans.

BucketFeet has raised a total of $13.3 million, and this latest $7.5M series A round was led by Jumpstart Ventures, with participation from Yunsan, Gordon Segal, founder of Crate & Barrel, and others.

You can learn more about BucketFeet here.