Reliable startup data is tough to find and track in Asia — let alone in the U.S. or other parts of the world — and, with the region an increasingly important one, this is a problem that Techlist, a service from fellow blog Tech In Asia (hi guys), aims to solve. Today, Tech In Asia announced the service has pivoted to a new model and that it is part of the Y Combinator Winter 2015 program.

Entry to YC is a major endorsement for Techlist, which is the only participant from Southeast Asia in the latest batch at the highly respected U.S. accelerator.

Techlist is not a startup itself, instead the service is part of Tech In Asia, a media company with offices in Singapore, Vietnam, Indonesia and Japan, and $2.89 million in funding from investors to date. Tech In Asia counts 75 employees across its three businesses: media — Tech In Asia, its Asia-focused tech and startup news site, and Games In Asia — its Startup Asia events program, and Techlist.

“Our mission is to help build the startup ecosystem in Asia,” Willis Wee, who founded Tech In Asia after graduating from Singapore Management University in 2010, told TechCrunch in an interview. “Last year, we realized that having a database would help accelerate things.”

Techlist was initially a platform to connect investors and startups in Asia, much like Angel List, but Wee said he quickly realized that it wasn’t being used that way and the model was changed accordingly.

“Founders didn’t want to share their data that openly. But when we talked to them, they told us that they would share information if we locked it up — in other words, if it was only seen by investors and selected others, then they would be more willing to give,” he explained.

Thus, while there are surface level comparisons between Techlist and TechCrunch’s own Crunchbase, the full spectrum of Techlist data — which includes more than 1,000 Asian companies, and 100-plus new entries a week — is only for paying customers. There is a free option, but available information is limited.

Access to the ‘Pro’ version of Techlist is priced at $399 per seat per month, a sufficient hurdle to attract the right audience. That package provides access to a treasure trove of data about Asian startups — including funding/employee/web traffic history — as well as vertical, industry-wide data for trends, such as funding. 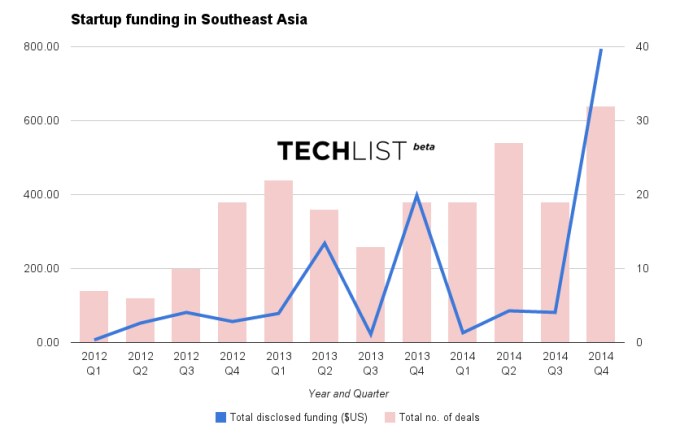 Tech In Asia also offers an enterprise package for more advanced requirements. That’s priced according to the needs of each client and operates much like a consulting partnership, with Techlist working to provide requests using its database and in-house analysis.

What sets Techlist aside from other data services is not only its focus on Asia but its partner-led approach to collecting data.

“Databases are often focused on serving investors, but Techlist is built more like a marketplace and less like a one-sided business.”

Wee said that around half of the site’s information is pulled in using technology, while a further 40 percent comes from Techlist’s own staff — the remaining 10 percent is via startups themselves. One-tenth might not sound like a lot, but, beyond the numbers, the most valuable data about a company is typically for the eyes of founders only, so securing some of that harder-to-find information is what Wee believes makes Techlist unique.

“Databases are often focused on serving investors, but Techlist is built more like a marketplace and less like a one-sided business,” he said.

Aside from the pricing barrier, all Techlist users must agree to an NDA on sign-up which forbids them from using data beyond due diligence purposes. (That chart above is one graphic that Techlist deemed suitable for public consumption, in case you wondered.)

“Further down the line, we are considering how we can help startups raise money,” Wee said of Techlist’s future plans. “With our data, and the demand and supply, we are definitely working something.”

Wee didn’t disclose the number of paying Techlist customers at this point, but he said that over 100 investors have joined in the past month. SoftBank Capital, DeNA and GMO Venture Partners are among the major VC firms on its client roster.

As for the longer term future of Techlist and Tech In Asia itself, Wee said he is focused on the potential that he sees in the company rather than an exit.

“There are a lot of other media companies talking to us, but we’re not ready to sell at the moment,” he revealed. “We are focused on continuing to take Tech In Asia to the next level. If we sell now, our mission will not be fulfilled.”

As someone who has written about Asia’s tech scene for more than four years — and has spent time playing with Techlist — I feel I’m pretty qualified to say that Techlist is an interesting project that I’m keeping my eye on. Wee said that the company is considering packaging trend-oriented data for media to use in the future, so I’m hopeful that the service can also help writers like me chronicle Asia’s rise with more color.

Update: There’s been quite a discussion about the similarities between Techlist and existing VC database CB Insights after visuals from both services were highlighted on Twitter.

CB Insights claimed 12 of Tech In Asia’s staff signed up to its free trial over the past six months. The company’s CEO Anand Sanwal called Techlist’s design “one of the more egregious cases of a line being crossed from inspiration to plagiarism.”

Wee, Tech In Asia’s CEO, said his company drew inspiration from CB Insights for some of its visuals and apologized directly for the similarities. He told TechCrunch that, though he believes the Techlist business model will be differentiated further down the road, his team is developing new visuals for the site which he expects to go live this week.