Tinder Plus, the long-awaited “premium” version of Tinder’s service, offering features like an Undo button for errant swipes and a Passport option for searching outside your current geographic region, is nearing launch here in the U.S. for iOS and Android users. Both of Tinder’s mobile apps recently received updates on the respective app stores where the feature was mentioned in the app’s update text – hinting at an imminent arrival. However, Tinder says that Plus is not yet being enabled for end users in the U.S. at this time – and the app’s update text descriptions will be edited to reflect this.

Instead, the dating app says its U.S. launch is still on track for a mid-to-late March time frame.

We first spotted the update on iOS thanks to an alerting service that pings us about mobile app updates – it had pulled in the newly updated text for iOS users in the U.S. App Store which described the changes like so:

“Undo – Take back your last swipe! – Passport – Change your location to match with people around the world! – Bug fixes”

Tinder says it has already corrected this update text.

Meanwhile, over on Google Play, Tinder’s app continues to mention both the Undo and Passport features. However, that could also be reflective of the fact that Tinder Plus is already live in a handful of countries at present. (Tinder understands that showing this text to U.S. users could be confusing and may edit it out for the time being.)

The paid version of Tinder was previously announced in November, and then selectively rolled out to test markets including the U.K., Brazil and Germany, where initially, only 40 percent of users were given access to the feature. That’s still the case today, as the company confirms that it’s still testing the addition, which is made available to users through in-app purchases, with a variety of price points. In some cases, purchases are just $0.99, while in others, Tinder is charging as much as $19.99 to see how consumers react to pricing.

The company had previously said that Tinder Plus would be live at year-end for all users, according to some reports, but clearly it has rolled past that more informal deadline. The feature is still being tested with a smaller percentage of its user base, and is not yet being switched on for those in the U.S. until next month.

Last week, a leak also pointed to a March time frame for Tinder Plus’s U.S. launch at a price point of $6.99 per month. Tinder today confirms it’s still on track for March, but won’t disclose pricing.

From what the company tells us, Tinder Plus may also include other features beyond Undo and Passport in future releases, based on user feedback and other demands. Tinder is not prepared to detail what those additions may be at this time, however.

In the meantime, in case you also happened to catch what appeared to be the launch of a U.S. version of Tinder Plus, know that you’re still going to have to wait a little longer. Instead, what the most recent updates to the Tinder U.S. apps reflect is that the feature itself is bundled in the software and code, but Tinder still has to enable the option before users stateside can actually use it.

Update: A tipster has sent us what appear to be two screengrabs from Tinder Plus — with pricing apparently starting at $2.99 per month to access premium features such as unlimited likes and the aforementioned rewind swipe option:

Meanwhile, on the U.K. App Store there are three pricing tiers associated with v4.1.1 of the Tinder app (which was released on February 2), although in-app purchases do not appear to have been switched on yet, and there is no mention of the premium features in the app description. 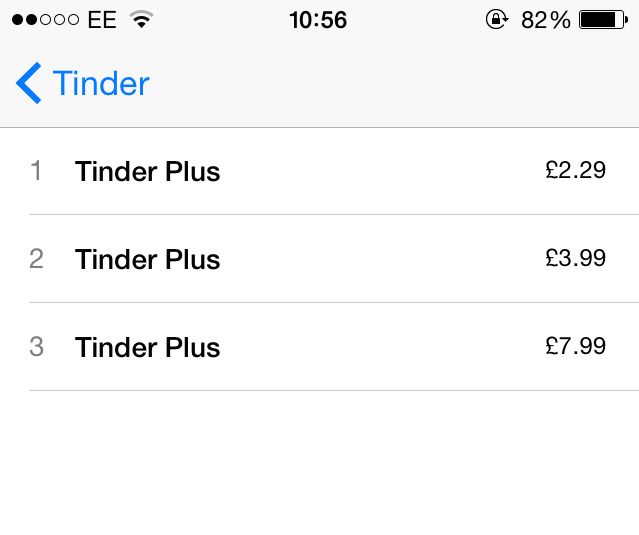