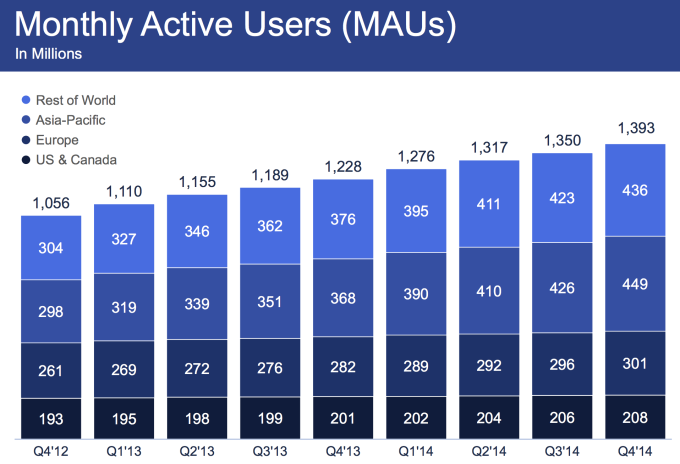 Wall Street expected $3.78 billion in revenue and $0.48. Other Facebook financial results include $2.72 billion in GAAP costs and expenses, $1.13 billion in GAAP income, a 29% GAAP operating margin, and $517 million in capital expenditures. Its costs have risen significantly as it warned investors, but its investments in Oculus and artificial intelligence could pay off big time in a few years.

Facebook spent Q4 focusing on improving its News Feed quality so more users would spend more time where it shows ads. It also got serious about serving video content, leading to huge increases in video views. It now sees 3 billion video views per day. By boosting organic video viewership, Facebook will be able to slide more lucrative video ads into the feed.

Facebook recently revealed its pilot for an enterprise social network product called Facebook At Work, but it’s not earning any revenue on it yet.

One remarkable number here is how Facebook’s advertising and measurement tools are letting is earn much more money from the same number of users. Facebook’s user count in the US & Canada only grew by 0.97% from 204 million to 206 million, but the average ad revenue it earns from each of those users grew 24% from $6.64 to $8.26. 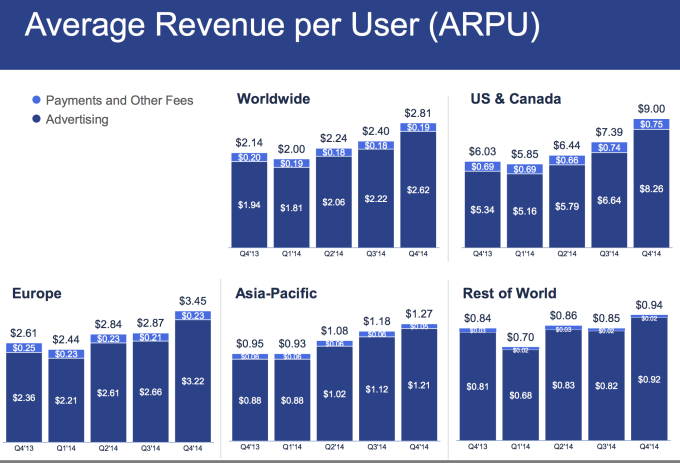 On the earnings call, CEO Mark Zuckerberg mentioned that over time, content on Facebook has evolved to be more rich — aka from text to photos to videos. He said that Facebook is working on tools that aid in rich content creation.

I’d expect Facebook to release either a standalone video storytelling app, or significantly improve the video and rich media sharing tool in its main app. That’s something I’ve been saying Facebook should do since 2013.

Right now, Facebook’s app doesn’t let you edit videos, tap-and-hold-to-capture, shoot multiple shots in a single video, set a cover frame, stabilize the image, or jazz up your creation with drawings, stickers, or audio. Any of those features would be welcomed improvements.

Overall, the takeaway from this quarter’s earnings is that Facebook is not only just a mobile-first company. It’s becoming a mobile-only company. Over a half billion people now use the social network only from phone. Many of those are feature phone users, though. Facebook’s next big challenge will be figuring out how to squeeze more revenue out of people with less buying power. That could make its efforts to connect the rest of the world a very profitable mission.