Snapchat may been in the news for its new media-centric ‘Discover’ platform, but a less familiar startup is pressing its claim as the most popular chat app among young people in the U.S..

Kik is almost a polar opposite to Snapchat. Based outside of California in the unglamorous Canadian city of Waterloo — home to BlackBerry — it is helmed by a publicity-shy CEO and has largely flown under the radar, raising $70 million to date. That’s in stark comparison to LA-based Snapchat, with its visible brand, ‘playboy’ CEO, $10 billion valuation and recent $485 million round.

Kik just passed 200 million registered users, but CEO and co-founder Ted Livingston played down that milestone, telling TechCrunch in an interview that it “doesn’t really matter all that much.”

Livingston also dismissed monthly active user counts, a metric that is increasingly presented by companies, as “meaningless”. He joked that Kik doesn’t release its own MAU number because it “hasn’t had time to juice the numbers.”

““Other companies make a big deal about MAU, but we think they might as well be called “minimally active users.” It’s a metric that’s so easy to game.”

“Other companies make a big deal about MAU, but we think they might as well be called ‘minimally active users’.” It’s a metric that’s so easy to game. For example, push notifications are so powerful for mobile that you can drastically increase MAUs just by blasting out a “Happy holidays!” and counting everyone who opened the app in response as ‘active’,” he added.

Livingston welcomes  a more quantified approach along the thinking of Twitter and Medium founder Ev Williams, who recently lamented the tech industry’s obsession with measuring “a mile wide, and an inch deep.”

“For a chat app that depends on frequent, meaningful conversation among peers, engagement is the golden goose,” he said.

So while WhatsApp claims an incredible 700 million monthly active users and Snapchat has a jaw-dropping valuation pre-monetization, Livingston counters with research that hint that Kik has higher user numbers and better engagement in the US.

Recent data from ComScore claimed that chat app usage has plateaued in the US. Those numbers suggest that Kik — which ranks second behind Snapchat on active U.S. users — has ridden the storm better than the rest of the field. 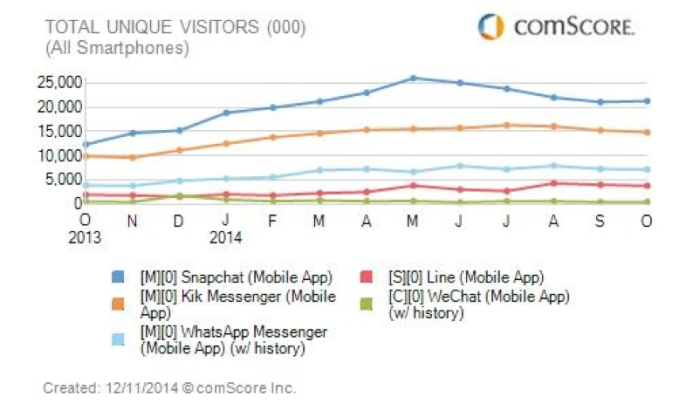 Livingston said ComScore’s data — which is based on a panel of 15,000 people in the U.S. — matched a worrying trend that Kik had seen among its users and, eager to learn more, it commissioned research from New York-based Magid to dig into the specifics.

Initially a project for Kik’s eyes only, according to Livingston — who wanted to know if other apps were in the same boat — the data suggests that Kik users spend an average of 35 minutes inside the app whenever they open it. That’s a stat that Magid found was only higher for Facebook, which averaged 37 minutes.

Kik has long stressed that it is focused on America’s young, mobile-first generation, thus Livingston said he was encouraged by findings that users aged under 20 are most engaged with its service. 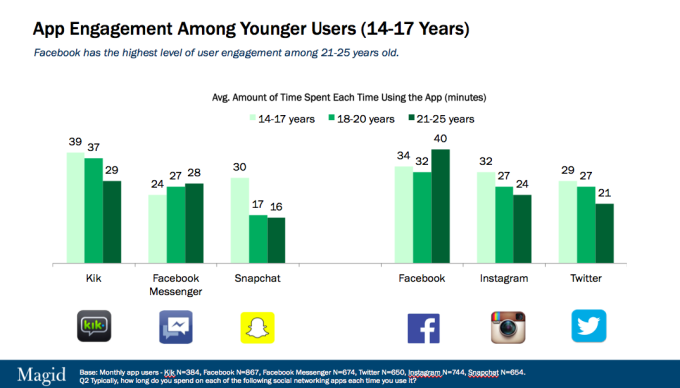 While it is important to note that Kik commissioned the Magid data and that ComScore stats are often hotly disputed by the publishers that the data firm uses to generate its figures, the general trends behind them are interesting.

Could it be that a dark horse is actually being underestimated by the tech industry?

It’s too early to really be sure, but Kik’s current roadmap certainly differentiates it from Snapchat — that’s something that Livingston is pleased with as he believes Kik is more appealing as a “pure messaging” player and Snapchat’s move into media lessens the direct comparisons.

“You don’t go into Snapchat just to text friend,” he said. “This [launch of Discover] takes them even further away from us, and more like Instagram and Youtube.”

Livingston is increasingly more vocal, and he’s been very clear about his objective to build the ‘WeChat of West’. He believes there’s scope to emulate the cult chat app that has become the de facto mobile internet in China, mixing in ingredients that work best in the U.S.

Beyond the basic chat experience, Kik began letting brands on to its platform last summer — its first major monetization move — whilst giving users control over what they see. This year it is planning to introduce a payments service which could eventually fuel a series of on-demand services that might let Kik users pay bills, buy shopping and more all while chatting to their friends.

“Young consumers in the West are like all consumers in the East. They haven’t yet decided where to bank, where to shop, or what games to play. But they all chat,” Livingston previously said in response to naysayers who don’t believe an Asian chat app model can work in the U.S.

It’s still early days, but the underdog from Canada is pretty bullish about its future — monthly active user numbers or not.