For all the innovation that has come out of startups, few have addressed one of the hardest tasks in the world: caring for a newborn infant. Whether it is providing milk at 3 a.m. or ensuring that the baby is exposed to the right shapes and sounds appropriate for its age, parents are faced with a near-constant barrage of challenges, often under incredible pressure and stress.

Taking advantage of the convergence of mobile, Internet of Things, and cloud computing, Rest Devices, a Boston-based startup founded by a group of MIT alums and dropouts, hopes to change all that with the development of a smart baby nursery.

Their first product is called the Mimo, a onesie for babies that includes sensors for monitoring a baby’s respiration, pressure, moisture and temperature. That data is transmitted from the sensors to a base station nearby and ultimately into the cloud, where it can be viewed on any mobile device, as well as shared between parents and caregivers. 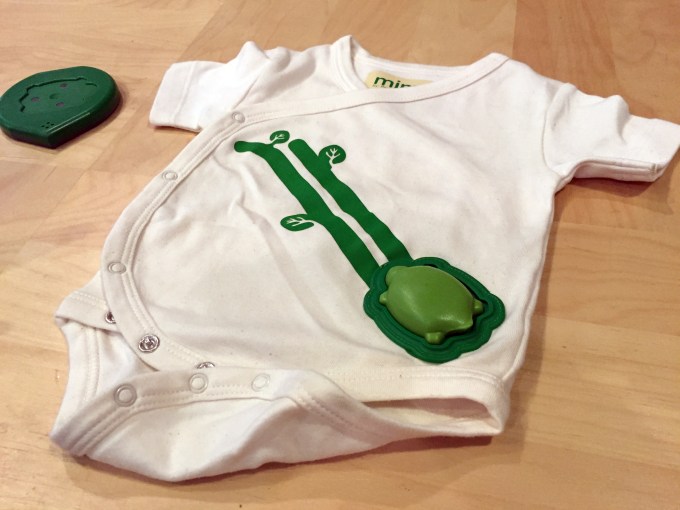 The Mimo onesie and base station

It’s at this point that the smart nursery begins. By analyzing the data, the startup is able to track the sleep schedule of the infant over time, eventually developing predictions on when a baby will fall asleep – and most importantly, when it will wake up. That means that parents can be notified in advance, so that they can already be prepared with milk.

The company’s latest feature, which it is currently beta testing, is a “sleep training” system. Dulcie Madden, the co-founder of the company, says that one of the chief struggles the company has heard from users is that sleep can be very fragmented and inconsistent.

“We are trying to see if there are things to improve the length of the baby’s sleep,” she explains. Longer-term, the company hopes to add a social component that would allow parents to provide insights to other parents about their sleep strategies.

In addition to its sleep features, the Mimo can track whether babies are sleeping properly, preventing the rare and tragic situation known as SIDS, or Sudden Infant Death Syndrome.

Patrick Chung, a founding partner of Xfund, was recently initiated into parenthood with the arrival of his new child. The experience catalyzed his thinking around Rest Devices, and he invested in a small seed round for the company. “The longest period of time in the world is the five minutes between when your child starts crying and the milk has been warmed up,” he told me.

That feeling is mutual across parents, which is why the company’s next product is going to be a smart bottle warmer, which will connect with the sleep prediction feature and automatically warm up milk as soon as a baby shows that it is getting restless.

Madden’s ultimate aim is to provide a complete set of products that are orchestrated together by its cloud nursery system. “We want to build a series of products around eating, sleeping, activity, and mobility that are all built on one platform.”

While the problems of caring for a newborn are obvious, solving them is anything but. Madden says that the first challenge the company confronted with designing the onesie was simply making it durable enough for home use. One of the requirements was that the entire onesie, including the sensors and transmitters, would have to be machine-washable.

The company solved that problem by ultrasonically welding the sensors to the clothes, ensuring that water wouldn’t be able to touch the electronics underneath. That created a new issue, though: Once it was sealed, it was impossible to open up malfunctioning sensors and investigate what was wrong. The startup ended up buying an X-ray machine to be able to peer inside.

It also built a set of robotic washers and dryers that can monitor the durability of its products. Today, the product can survive an average of 90 washes, and the startup is constantly striving to improve that number.

The company’s location in Boston has given it a lot of manufacturing flexibility. Its injection molder is located just 45 minutes away, which allows the team to travel and observe the implementation of the product specs directly. In many cases, if an issue develops in part of the manufacturing process, the company can make changes to the design, get them to the manufacturer, and get new units back in as little as a day.

The company tests every single onesie that it produces, and it continues to do the ultrasonic welding itself in house, several thousand units a week. “Everything that happens between a parent and a baby happens multiple times a day – sleep cycles, feeding,” Madden explained to me. “So you have to get it right so it doesn’t become a problem.”

Currently, the Mimo onesies come as a starter pack of three onesies plus the base station with a suggested price of $199. Afterwards, parents can buy packages of two onesies for $29. The startup has already developed several retail partnerships with Babies“R”Us and Amazon, and has two more partnerships in the works.

If babies are the future evolution of humanity, then Rest Devices may just be the next phase of the Internet of Things fever. Not just about flicking the lights on at predetermined intervals, this new generation of products has the opportunity to reshape how we think about family relationships, and through its convenience, ultimately improve what we most care about: our children.