Today, Microsoft shed tens of billions of dollars in value, after its earnings failed to impress the investing classes. Microsoft closed down 9.25 percent in regular trading.

The company’s shares slipped after-hours yesterday by several points in the immediate aftermath of the report, which indicated that Microsoft had earned $0.71 per share on revenue of $26.5 billion. The latter figure represents a modest revenue beat.

Microsoft’s stock failed to turn positive during its earnings call, in which the company predicted very modest short-term growth. The company forecasted roughly 5 percent revenue growth for its current fiscal year. Foreign exchange issues stemming from a strong dollar and macro conditions in China, Russia and Japan were noted points of friction. 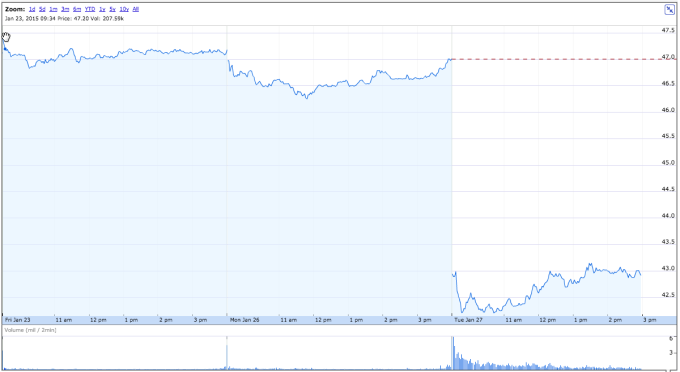 Microsoft’s shares have been on a tear in recent months, and even with today’s sell-off, remain comfortably over the ever-important $40 per share threshold. This morning, however, saw Microsoft pick up six new ratings from analysts: one sell, three holds and two buys — there is some dissension among the nattering classes as to where Microsoft’s shares are going next.

According to Yahoo Finance, Microsoft is still worth $386 billion, so I doubt there are too many tears in Redmond today.