If you’re a Facebook advertiser wondering whether your ad actually convinced people to buy your product, well, you may now be able to measure that directly.

The company has worked with measurement companies like Nielsen and Datalogix to study ad effectiveness in the past, and it’s been adding offline measurement data to its Custom Audiences ad targeting tool.

Brad Smallwood, the company’s vice president of measurement and insights, told me that Facebook is going further today by making conversion lift measurement available to a broader group of global advertisers. Basically, that means any advertiser with a direct relationship with Facebook will now be able to perform studies on whether their campaigns led to an improvement in online and offline sales, as well as other conversions. (A spokesperson added that the eventual goal is to measure the lift in any kind of business objective, including app installs.)

To do this, Smallwood said Facebook looks at one group of users that saw the ad campaign, and another group that didn’t. Then it compares those groups with the advertiser’s conversion data, which can come from things like the Custom Audiences pixel or an in-store point-of-sale system. (From a privacy perspective, Smallwood said it works exactly the same as the existing Custom Audiences product, with user lists only shared in a hashed, privacy-protected way.) 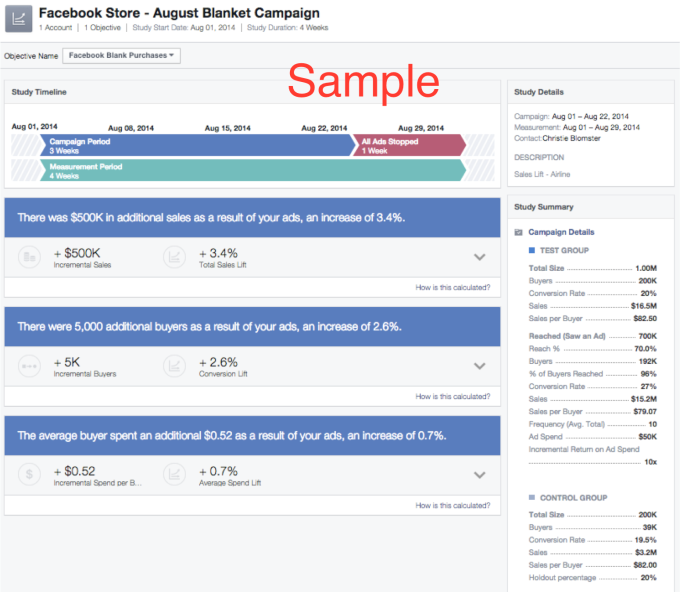 This is particularly important, he argued, because it allows more advertisers beyond to look beyond last-click attribution — i.e. the system where, if a user clicks on an ad and makes a purchase, then that ad gets all the credit.

However, even if it doesn’t lead to an immediate sale, an ad can still contribute to the decision-making process, , and focusing on that final click can lead marketers to misjudge their success and allocate their resources improperly. To illustrate the point, Smallwood compared an online advertiser to a fast food chain that’s looking at the sign by the entrance and saying, “Oh my gosh, that is what’s driving people into my store, and that is the only piece of marketing that matters to me.”

Smallwood acknowledged that whenever Facebook releases data or products in this area, people assume that the only goal is to “show that Facebook ads work.” However, he said his team is thinking more broadly than that, and trying to help advertisers spend their money more smartly on Facebook.

“What’s really important to the marketers is figuring out what exactly is working, and more importantly what’s not working in their marketing campaign, so they can invest more money in the things that work and they don’t invest in the things that don’t work,” Smallwood said. (And hey, if that leads to increased spending on Facebook, I’m sure he wouldn’t complain.)

For example, the children’s furniture company Land of Nod supposedly tested out the new feature and found that Facebook campaigns led to a 12 percent lift in conversion, which helps the company justify its Facebook spending and set its goals for 2015.