Pinterest this afternoon announced a change to its site’s search settings, which will now introduce search results that are personalized to your interests, based on whether you’re interested in products for men or for women. This setting is based on the gender you previously selected for your account when signing up for the service, the company tells us.

The change is likely meant to make the largely female-favored site more popular among men. Today, 71 percent of the site’s 72.5 million visitors in the U.S. were women, comScore data indicates, though the demographics are less skewed in emerging markets, the company has said previously.

Men are Pinterest’s fastest-growing demographic, the service reported in November, citing internal data that pointed to one-third of all sign-ups now coming from men, and closer to a 50/50 split between genders in signups from outside the U.S.

Now, Pinterest reveals that its U.S. male user base grew 73 percent year-over-year in 2014.

With the change, Pinterest is trying to maximize its usefulness to its male users. The company tells TechCrunch that the change is meant to basically serve as a filter that lets you quickly see the most relevant results so you “don’t need to dig through irrelevant Pins when searching for things like shoes, sunglasses, workouts, hair, and tattoos,” for example. 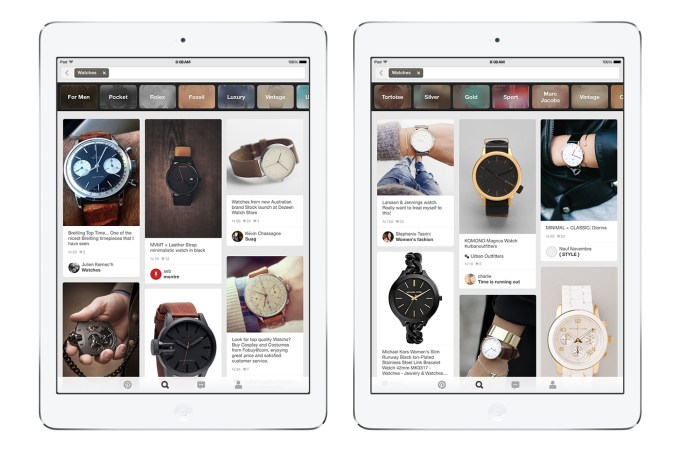 The filter, like others that appear in Pinterest’s “guided search” feature, can be toggled on or off at will. In other words, it’s not meant to hide content from you, it’s more about allowing you to narrow down your search results. It can also be enabled when you’re looking for gifts, for example, like if you’re a woman researching men’s watches for a birthday present.

Says Pinterest, the larger goal with the change is to make its site more of a discovery engine that uses technology to better match people to the best results for them, and the change is about making that even faster than before.

The new filtering will be available on thousands of searches on the site going forward, including things like  “watches,” “health,” “fashion,” and “tattoos.” The company had previously been testing this feature, apparently, as Pinterest notes it has already seen this change bring about a double-digit lift in engagement, “similar to the new user experience that shows trending interests for each gender to choose from as they get started,” we’re told.

While the change may prove to increase the site’s usefulness to Pinterest’s sought-after male demographic, it’s worth pointing out also that broadly painting items as being “for men” or “for women” bumps up against the efforts society has made thus far to distance itself from a binary gender system. Other social networks, like Facebook, for example, have allowed users to select from dozens of gender options. However, this could be a technical challenge, especially for a site like Pinterest, which is focused on returning product results already marketed to “men” or “women” by their manufacturers.

But in the long run, Pinterest may do better to work to improve its true personalization capabilities by learning what style of shoes or watch one prefers regardless of a gender-based label – rather than categorizing some items as being for one sex or another.

Correction: Pinterest is largely female (“women”). The typo has been fixed.