A startup offering a solution for parents with small children who want a way to easily save and store their kids’ artwork, Plum Print, has raised a million-dollar seed round to continue to grow its business and expand into new products. The company today offers a handful of photo books it puts together on parents’ behalf, after first sending out a postage-paid box that parents fill with any art, school work, or even 3D creations, like pottery or figurines, then ship back to Plum Print.

The round, which closed a couple of weeks ago, was led by Brooklyn Bridge Ventures, and also includes a number of angel investors, many from the Asheville, N.C., area where Plum Print’s production headquarters is based.

The idea for Plum Print came from Carolyn Lanzetta, previously an equity trader at JP Morgan. As a mom herself, she, like many others, found herself “drowning in artwork,” she says. Lanzetta asked other parents how they handled the problem, but no one really had a good answer. So she ended up photographing her child’s art and putting together a custom book using professional tools like Photoshop and InDesign.

Soon, friends of hers were asking if she’d make them a book, too, for their own kids’ art, and the small business was born.

Initially, Lanzetta says she tried replicating the process via a mobile app, but found the quality of the photos was poor and the resulting product didn’t have the right feel. 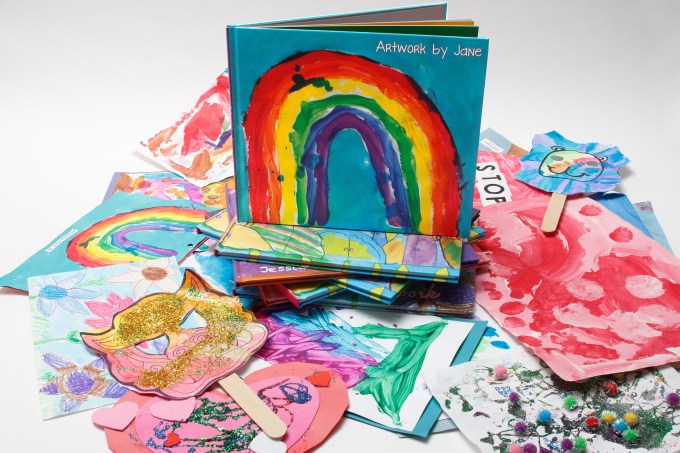 It’s also worth noting there are already a number of apps like this on the market, including Canvsly, Keepy and ArtKive, for example. None have grown to include massive customer bases, though. One of the issues with using an app – at least from personal experience – is that it takes too much time to sort through the piles of art, then photograph, not to mention annotate, each one.

It becomes easier to just throw your favorites in a box, and trash the rest.

Plum Print, however, offers a different type of solution. Instead of having parents photograph their own kids’ art, the company does it for you. And the box you normally throw the art into is replaced by the “Plum Print parcel,” which is a good-sized postage-paid box that you fill up, then send back to the company when you’re ready to produce your book.

A week after you ship the parcel back, parents are sent a book proof via email which they can edit or approve. Then, another week later, they’ll have their custom book shipped to their door. (Parents can request the art is returned, too, if they choose). 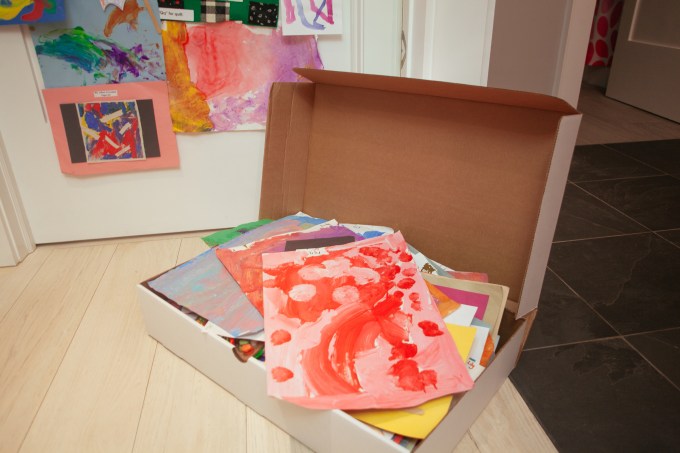 The e-commerce site for Plum Print, which is also co-founded by Meg Ragland, previously an editor at Women’s Day and Family Circle Magazines, went online in 2012 in order to test the market. The co-founders didn’t advertise their site for some time, but generated orders through word-of-mouth referrals. To date, Plum Print has shipped 2,700 books, which start at $85 for a softcover edition, then go up to $130 or $175 for the small and large hardcovers, respectively.

Parents can include as few or as many items of artwork as they want in their box. One of the larger, coffee table books that Plum Print produced, for example, featured 800-some photos of art.

The company found that parents who use the site are likely to return. Seventy percent of the company’s 2013 customers came back the following year to reorder, for instance. On average, however, parents usually only order once per year, likely due to the costs involved. This year, Plum Print plans to change that with a new product line. 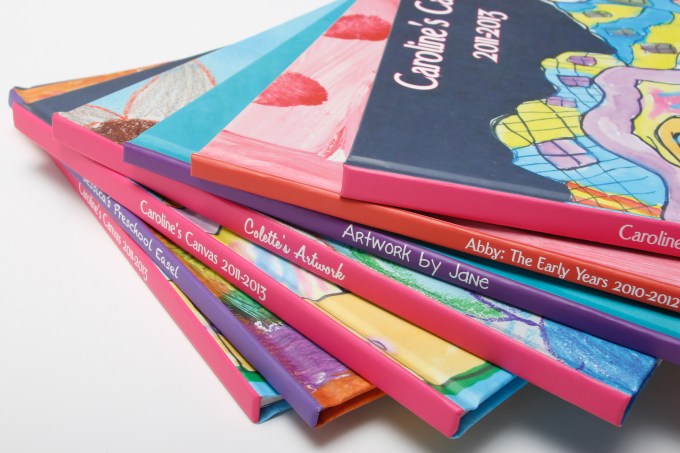 The company in Q2 will allow parents to purchase other photo gifts at different price points, including things like calendars, notecards, iPhone cases and more. To build out its tech platform, Plum Print has brought on a former senior Google engineer, thanks to the new funding.

Plum Print will also expand its brand ambassador program, which involves partnering with local schools and PTAs, who can share in the proceeds of book sales as a low-effort fundraising activity. Today, Plum Print currently partners with schools in 10 states and shares, on average, 10 percent of sales.

Longer-term, Plum Print has plans to introduce a SaaS (software-as-a-service) style offering, too, but Lanzetta didn’t want to share details on that just yet. “It’s definitely on the roadmap – tt’s related to our further integration into schools,” she hints.