App makers will no longer be able to fudge their numbers by buying downloads in order climb the App Store’s charts in an effort to manufacture popularity. Many companies today, including most recently, App Annie, are now expanding their mobile app analytics services to track app usage, engagement and other metrics that detail an app’s true traction among users.

Today, a company called SimilarWeb, which has been operating something of a comScore or Alexa competitor for website measurement and analytics, and starting late last year mobile analytics, is also now venturing into app engagement with a new product it’s calling its “App Engagement Market Intelligence” service.

The launch comes after market leader App Annie last week announced a $55 million fundraise and its expansion into app usage and engagement metrics. But App Annie is not alone in realizing the market opportunity in being able offer insights into mobile apps’ internal metrics. In the past, these figures were relatively hidden from outsiders, including users, investors, competitors, and reporters, all of whom are sometimes interested in determining an app’s real popularity and draw.

One of the leading companies early in the space, Onavo, was snatched up by Facebook in 2013, leaving a void that App Annie and several others, including now 7Park Data, Mobidia, SimilarWeb and more are starting to fill.

With SimilarWeb’s new product, the company hopes to answer not just whether or not apps have been installed and how they rank, but also whether or not they have value.

How many active users does an app have? What other apps do they have installed? Do users launch the app several times per day? How long are their sessions? How often do they return? These sorts of insights are more telling than how many downloads it has.

SimilarWeb’s App Engagement Market Intelligence, which is now launching into beta, uses an app index that’s pulled from millions of devices. While the company, like its competitors, keeps much of its methodology private, it’s able to gain insight into apps because of other apps it has on the market where users agree to share their data back with the company, as well as via more traditional panels.

This is the same approach that Onavo took, and App Annie takes today, having launching a subsidiary called Smart Sense which will produce its intelligence-gathering applications.

“…We [also] take a portfolio approach to collecting app engagement data, so it’s not only apps that we build in-house, it’s also partner apps,” SimilarWeb tells us. “Strategic acquisitions are also an important part of our data collection strategy.”

The company feels it has a strategic advantage in the space because it’s not just a mobile analytics company – it also has website analytics. Though seemingly disparate products, there’s actually some overlap.

For example, now that Google shows apps in its search results, SimilarWeb is able to see much traffic those apps get, and the keywords that send that traffic to the apps.

Today, SimilarWeb sees around 2.5 million visits to its free website per month, and counts thousands of paid subscribers to its service, including Outbrain, PayPal, eBay, Travelocity, William Hill, Flipkart and others.

To kick off the service’s launch, the company is offering a ranking of apps by usage (Android only). This list ranks apps differently from how they’re listed on app stores, instead showcasing those users access the most often. (See below). The list shows that apps like Facebook, Chrome, Instagram, YouTube, Snapchat, Whatsapp, Minecraft and others are really tops on users’ phones.

Initially, the new service is offering insights for Android apps in the U.S. and U.K., but will expand to other countries and to iOS in 2015. The pricing for the service is also still to be determined. Beta testers can sign up here. 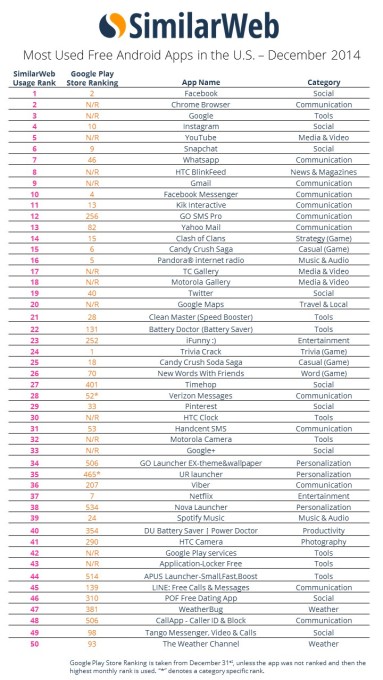 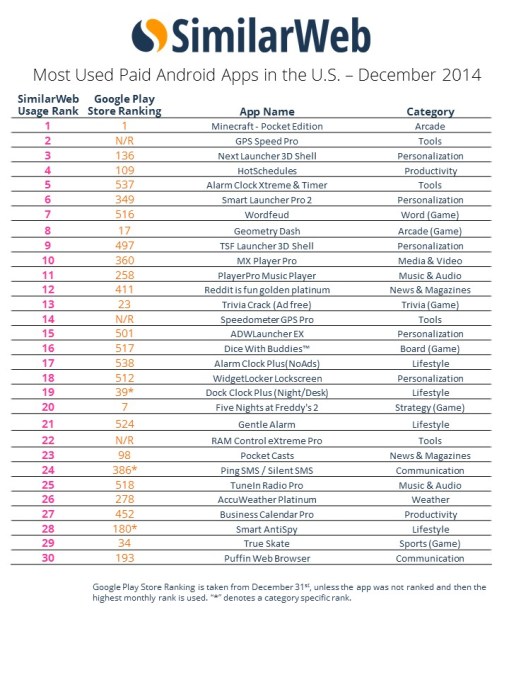