To many U.S. consumers, QR codes already seem like a quaint tech relic, but they continue to be popular in China. In fact, over the past two years, QR codes have become increasingly ubiquitous thanks to Weixin, the country’s top mobile messenger, and shopping apps.

So it’s not a huge surprise that Visualead, an Israeli startup that specializes in QR code technology, announced today that it has raised Series B funding from Alibaba Group, the owner of China’s largest e-commerce businesses. The round is a multi-million dollar investment, but Visualead did not disclose an exact amount.

The funding is the first time that Alibaba has invested in an Israeli company (it has already made overseas investments in India, Southeast Asia, and the U.S.). Previously, Visualead had raised a total of $2.4 million in two rounds, including a $1.6 million Series A and $750,000 in seed funding.

A strategic agreement struck along with the Series B will allow Alibaba to use Visualead’s technology in its properties, which range from shopping sites and apps to a cloud computing platform, and even include a movie production studio. Visualead, meanwhile, will use the capital to develop its offline-to-online technology.

Launched in early 2013, Visualead, which says that 500,000 businesses in 200 countries already use its tech for offline-to-online mobile marketing, seeks to stand apart from competitors by letting users create QR codes that blend into designs, instead of looking like randomly placed crossword puzzles.

The company claims that consumers are up to four times more likely to scan one of its Visual QR Codes than a run-of-the-mill black-and-white QR code. Visualead’s codes can be used in images, animations, and videos.

As part of the agreement, Visualead will collaborate with Alibaba’s own scannable code business Mashangtao, which lets merchants on Taobao Marketplace and Tmall.com create and use QR codes. The two are already working together on mobile, video, and anti-counterfeiting technology.

In a press release, Mashangtao director Zhang Kuo said “We believe that Visualead’s leading Visual QR Code technology will complement our mobile marketing initiatives and enhance our ability to take advantage of the booming O2O opportunities in China.” 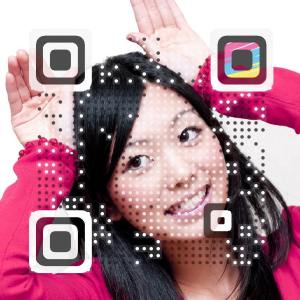 China has been a key market for Visualead since its launch and its partners already include social network Renren.

QR codes have grown in popularity because of Weixin, the messaging app made by Tencent, an Alibaba competitor. Weixin users can scan QR codes to purchase a product, get information about a brand or company, and access promotions through the app.

Weixin and WeChat, its international version, have over 400 million users, and it’s a potentially powerful tool to leverage for O2O transactions as Tencent builds its e-commerce business through a series of investments and strategic partnerships with companies like JD.com, an Alibaba rival.

Even though it is China’s leading e-commerce player by far, Alibaba isn’t content to rest on its laurels and is also busy chasing O2O opportunities.

It has already used QR code technology to encourage offline-to-online purchases—for example, a customer who sees a product they like in a newspaper or magazine advertisement can scan its QR code and have the item show up instantly in their online shopping cart. Alibaba used QR codes to drive sales during last year’s record-breaking Singles Day (an annual day of online sales similar to Cyber Monday) by letting users quickly pick out items on display in the brick-and-mortar stores of its partner vendors.

China’s central bank banned the use of QR codes in mobile payments last year, but if that is lifted, it could be a boon for Alipay, the Alibaba Group affiliate that is currently China’s largest online payment platform.