Xiaomi, the Chinese company that recently became the world’s most valuable startup (depending on your definition of startup), took the wraps off its latest phone in Beijing today… and the comparisons to Apple are likely to flow once again.

The Xiaomi Mi Note is priced at 3299 CNY (~$530) for a 64 bit model, and the higher-specced Mi Note Pro, both look to be the Chinese company’s response to Apple’s iPhone 6+. Indeed, that’s a comparison that Xiaomi positively encouraged at its launch event, where CEO and co-founder Lei Jun made multiple references and comparisons of the two phones.

Jun said he was proud that his company’s new device is lighter, thinner and lighter than the iPhone 6+, but yet it has a larger screen. The Xiaomi CEO also made reference to the obtruding camera of the iPhone 6+, pointing out that — you guessed it — the rear-facing camera on Xiaomi’s new device doesn’t stick out in that way.

When it comes to camera tech, Xiaomi has added optical image stabilization to the 13-megapixel front-facing camera too, and Lei Jun impressed the crowd with a series of images captured from the Mi Note.

As for the Mi Note Pro, that comes with a more powerful 64-bit, 8-core Snapdragon 810 processor, and a whopping 4GB RAM. The device includes 64GB of storage and costs 3,299 CNY ($535) — Xiaomi says support LTE-CAT will give users lightning fast 450Mbps download speeds. The Mi Note Pro is the most expensive phone that Xiaomi has ever sold, and its best on paper too.

The Mi Note is just 6.95mm thick and weighs in at 161g. Jun said the company had focused on improving battery life — it actually produces a line of portable chargers, so has the knowledge in-house — and the Mi Note packs a 3,000 mAh battery courtesy of LG.

Another notable feature is the device’s glass, which is curved on its edges. That curve isn’t like an LG-style flexible screen nor the eccentric Galaxy Note experiment, instead it gives the phone more sleek curves and design.

Beyond a new, larger device, Xiaomi also showed off its first set of own-name headphones, which even come in a zip-up box that is reminiscent of the Apple-owned Beats brand.

Priced at 499 CNY ($80), Lei Jun said the headphones are on par with the best (and most expensive) in the market, including Sennheiser. 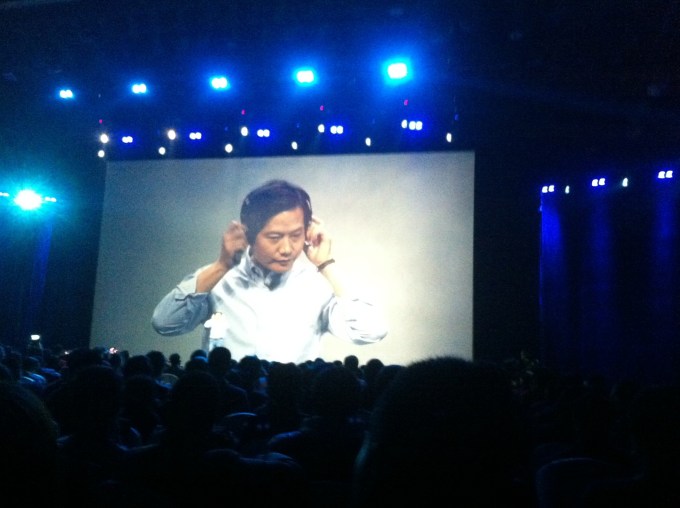 Much of the comparison to Apple stems from the fact that the U.S. company is still seen as the producer of the best products on the market, which makes it the standard to beat. Although Lei Jun did crack a few jokes, including one about how easy it is for Apple customers to switch their SIM to a Mi Note thanks to its support for multiple SIM types.

Lei Jun also used his stage appearance to hit back at common refrains in the media that Xiaomi is weak on patents. He claimed that the company filed 2,318 last year and has a team of experienced people running it. It ten years, he said, Xiaomi will hold “tens of thousands of patents.” IBM is currently the reigning champion when it comes to getting patents granted, but Apple and Google are catching up in what remains a strong undercurrent in power plays between mobile tech companies.

Of course, another ten-year goal for Xiaomi is to become the world’s biggest smartphone maker. The company’s rapid expansion has already taken it to third worldwide, and first in China, this year. The feature-packed Mi Note is sure to resonate with fans in China, where the iPhone 6+ has reportedly been a big hit, and it will be interesting to see how it fares overseas, too.