Dating service Zoosk has laid off 15 percent of its employees this week, sources told TechCrunch, and the company now confirms. According to a spokesperson, the move was made as part of a larger effort to lower expenses in many areas. News of the layoffs follows the exit of Zoosk’s founders from their leadership roles last month, and confirmation that the company was indefinitely delaying its IPO plans.

The headcount mentioned on Zoosk’s SEC filing referenced 168 employees, but figures cited in 2014 saw that number had grown to 174. (Zoosk has yet to provide us with its current headcount, though we’ve asked.)

In April 2014, Zoosk filed plans with the SEC for its $100 million initial public offering. The company, backed by Canaan Partners, Bessemer Venture Partners and ATA Ventures, at the time was seeing a net loss of $2.6 million in 2013 on revenues of $178 million. In addition, the filing revealed that the company was spending a lot on marketing and saw Tinder as a real threat to its business.

Data provided to us from analytics platform 7Park showed just how credible the Tinder threat was (and still is): 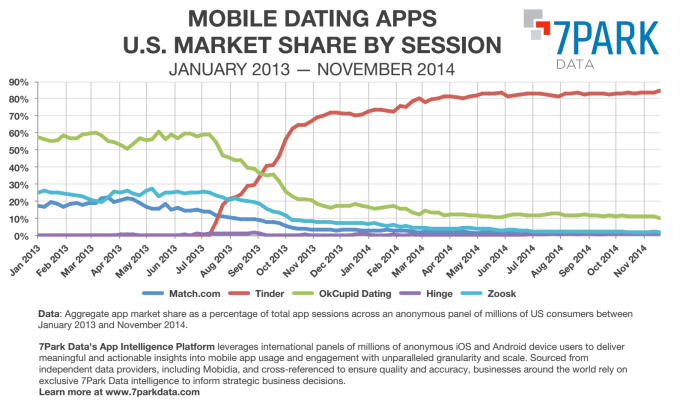 Zoosk claims to have 29 million members, and competes with sites like eHarmony and Match.com. It has a significant presence on mobile, but Tinder has been running away with much of the market there, as you can see. Most of Zoosk’s revenue comes from subscription fees, which made up 86 percent of its business in 2014. Zoosk has raised $60 million since its 2007 founding.

This past fall, Bloomberg reported that Zoosk had decided to hold back on its IPO plans, deciding instead to watch market conditions and possibly delay its IPO until 2015.

And just last month, more hints of troubles at the company emerged when Zoosk’s co-founders Shayan Zadeh and Alex Mehr pulled back from their day-to-day involvement, becoming members of the board instead. CFO Kelly Steckelberg then took over as Zoosk CEO, as the company continued to reassess its IPO plans.

At the time, Steckelberg confirmed that conditions were still not right for the company to proceed with its offering.

“Since the time we filed, the market condition around comparables that would be used to help value our company, like Angie’s List and Care.com, have not performed well,” she told TechCrunch. “While the overall market might seem receptive to a public offering, subscription businesses have suffered.”

The company’s full statement regarding this week’s layoffs is below:

In an effort to speed Zoosk’s path to becoming a self-sustaining, profitable company, we’ve lowered our expenses in many areas. We also had to make the difficult decision to reduce our headcount by 15%. We respect and support our Zoosk colleagues who were affected by this reduction.