The Withings Activité is among the best-designed activity trackers to ever come to market, and now Withings is back with the Activité Pop, a version that costs $300 less, while offering the same features as its pricier counterpart.

The $150 Pop is simply the best dedicated activity tracker that one can buy right now. For the simple reason that unlike the rest, it won’t just be shoved in a drawer and forgotten months, or even weeks after purchase.

The Activité Pop is not quite as premium as the Activité upon which its design as based, feeling a tad lighter and cheaper, with a domed mineral glass that seems to offers less visual clarity than the sapphire crystal on the full-priced Activité. The face details are also slightly less refined, but beyond that, the Pop retains the good looks of the Activité and in fact, may even be more appealing to some, with its colorful options and scratch-resistant matte PVD coating.

The unit we reviewed comes in black, with a black silicone strap, but other strap options are available (and the watch is compatible with the leather straps that work with the original Activité, too). It’s also available in a bright blue, and in a beige-like ‘sand’ tone, with a variety of contrasting wristband options going on sale later to offer ample customizability.

In short, the Pop pops, and like the Activité before it, it also draws plenty of looks and compliments from observers. These devices are the first fitness trackers I’ve worn that have garnered that kind of response, and they impress in a way that is surprisingly non-polarizing – reaction is almost always positive, which is more than I can say for any other trackers whose designs are intended to be provocative.

Withings has brought all the features of the Activité over to the Pop, including step tracking, run detection, planned swimming tracking and sleep monitoring. The activity tracking happens via a small sub-dial on the watch face, which shows your progress towards a step goal from the app as a percentage of the total.

Other features include automatic syncing to the time zone of your smartphone, once you open the Withings app on your device. It’s a great feature if you travel frequently, and even if you don’t, it also takes away the annoyance of having to change your watch to keep up with daylight savings time. Finally, gentle vibration alarms will alert you when you hit your step goal, or help you wake up in the morning in a way that won’t also alert your sleep partner. The vibration alert is very gentle, however: I didn’t feel it during my use of the Pop throughout CES, even though I hit my target most days.

The Activité Pop is the best activity tracker you can buy right now, and there’s a simple reason for that: Its simplicity. The watch counts your steps, and offers ambient switching to running when you need it. It monitors sleep in a basic way, and that’s about all. But that’s all a device like this needs to do. 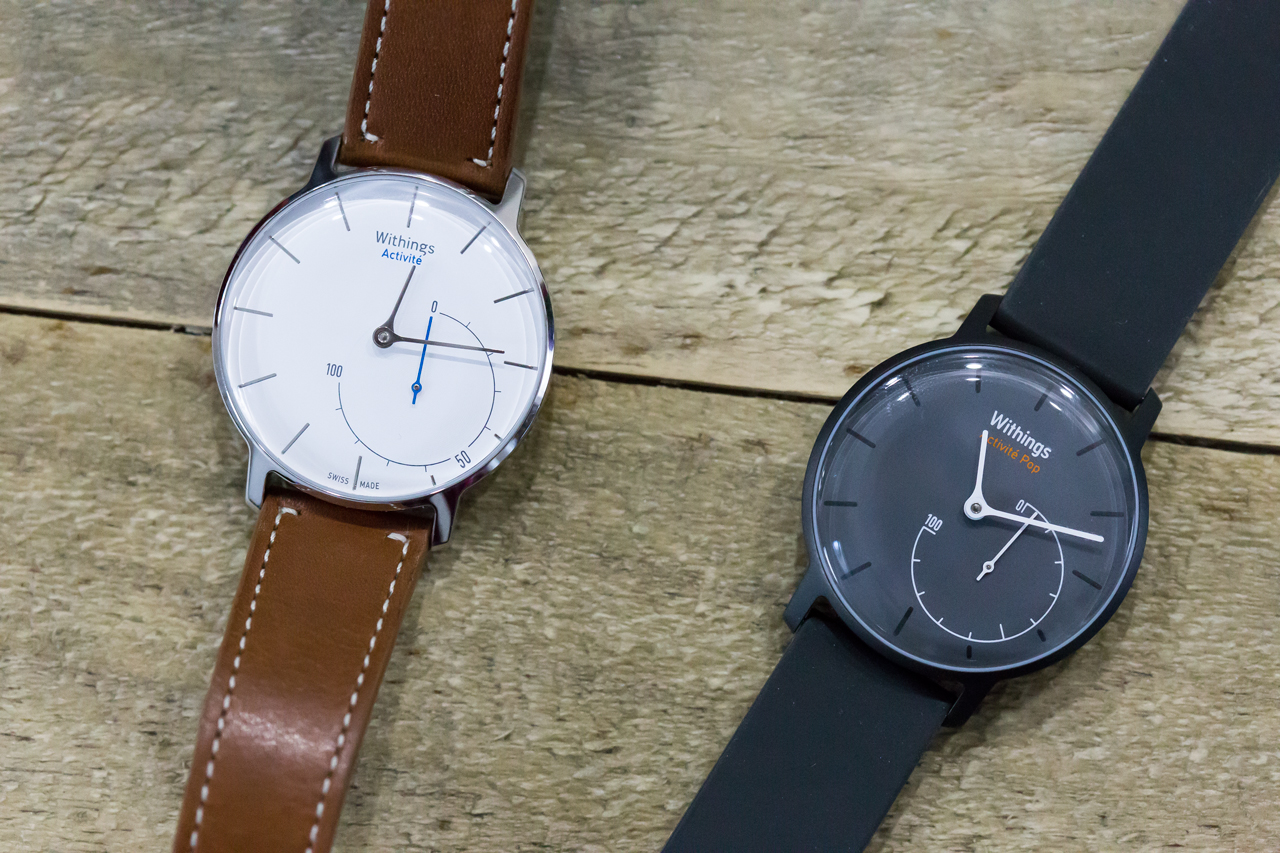 Activity trackers aren’t about turning ordinary folks into Olympic athletes, they’re about motivating people to live a healthier lifestyle. Most manufacturers miss the point of what makes these devices effective, and add in a bunch of overwrought features that ultimately aren’t all that useful. Non-continuous heart rate monitoring, for instance, or smartwatch notifications, or any number of other stupid, “differentiating” factors.

Withings offers just what it needs to, and also gets right another factor that might be most important: battery. The Pop can last for up to eight months on its single watch cell battery, and that’s about two months longer than even the most dedicated activity tracker users actually employ their devices. The fact is that when most tracker run out of juice, people don’t bother recharging them, especially once they’ve had to do so 30 times in almost as many days. A Withings Pop battery burnout will be an event, not a chore you have to get used to, and that may be its most attractive feature.

It’s also just a good-looking watch, and the people most likely to want to wear something on their wrists all day are those that are already okay with doing exactly that with a standard timepiece. You have to sell people on the basic idea of a watch before you can sell them a smart wristband or smartwatch, and then convince those who like the idea of a watch that they’d actually prefer something generally uglier, so Withings has eliminated half of its heavy lifting with this design.

The Withings Activité Pop is the device you should be looking at if you want an activity tracker. Those with more demanding needs are better-served by always-on heartrate monitors and dedicated fitness GPS watches, and anything in between is pretty much worthless feature creep. The wearables market has long seemed like a space struggling with its own identity, and Withings may be the first company to have found a formula suitable for the general buying public, especially when it comes to activity tracking in particular.