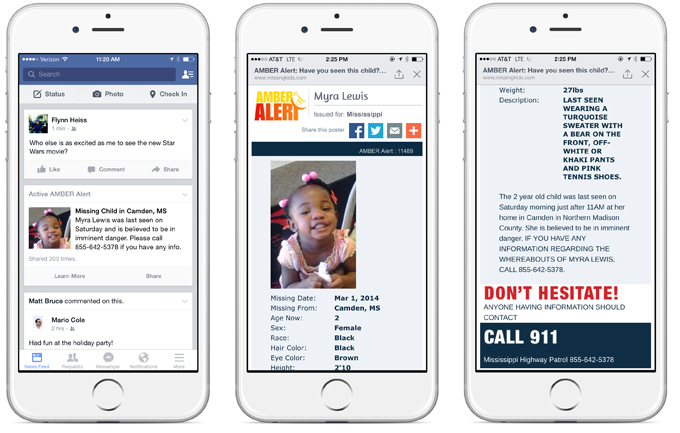 Your phone probably already receives AMBER alerts when a kid goes missing in your area. Most smartphones are configured to allow it right out of the box.

But Facebook thinks they can help make the system better — and starting today, they’re going to try.

Beginning this morning, Facebook will begin sending AMBER Alerts about missing children to the newsfeeds of mobile Facebook users in the area.

So why do this, if most phones already do something along these lines? Like just about anything having to do with Facebook, it’s all about what they can get in front of a user’s eyes.

The alert system built into most smartphones is limited to a few lines of text — enough for a license plate, and perhaps a super brief description of a vehicle involved in the abduction.

The built-in system on the iPhone, for example, looks like this: 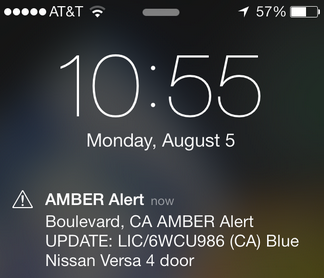 Facebook’s system, meanwhile, can send just about anything that’ll help get the kid home, be it pictures of the child, shots of the involved vehicles, or specific details about the situation.

Unlike the built-in system, however, Facebook’s alerts won’t show up on the lockscreen.

The whole thing is being done in partnership with the National Center for Missing and Exploited Children, and is something of an extension of a partnership they setup back in 2011. That first partnership was a bit limited, though — if only because users had to opt-in before it became active.

This is where I’d normally end a post on some bit of snark or another, but… they’re helping to find missing kids. That’s a snark-proof endeavor, in my book.

The girl in the photograph above is Myra Lewis, who has been missing since March of 2014. If you have seen her, please find more information here or call 911.