Polaroid’s attempt to re-establish its brand in the age of digital photos continues this morning with the announcement that it has partnered with Edinburgh-based photo journaling service Blipfoto, which is now relaunching and expanding into the U.S. The service, available on the web and in mobile apps for iOS and Android, offers users a place to document their lives by sharing only one photo per day.

The limitation on sharing is the service’s differentiating factor. As Polaroid’s President and CEO Scott Hardy explained in a news announcement, people are now taking 1.8 billion new images daily thanks to digital cameras. “As more and more consumers gain access to connected devices, this number is sure to grow exponentially,” he says. “However, the truth is that the majority of these photos have little meaning or impact.”

On Blipfoto, users can post just one image each day along with text, if they choose. It’s an attempt to get users to slow down and be thoughtful about what they share – odd for a brand best known for encouraging people to take more photos, more spontaneously, with its introduction of instant prints. But Polaroid sees a broader connection in that both companies are about “capturing life’s moments.”

The idea for Blipfoto photo journal is nearly a decade old, but the website wasn’t opened up to users until 2006. An undisclosed round of funding arrived in 2010 from investors including Ken Morse (founder of MIT Entrepreneurship Center, IT services firm Versko, the Story UK marketing agency, and Scottish Enterprise, allowing it to further its development. Since then, the photo journaling service has been growing its user base in the U.K. and Europe, and it currently has users in 175 countries worldwide. Its users, combined, have recorded 5 million total days. There are over 30 million comments, or 6 comments per photo on average, across its network, which reaches more than half a million people every month.

The company doesn’t share its exact user numbers, but its iOS app has been live since mid-2009, according to App Annie. However, it was never able to climb up into the Top Charts, it seems – the app’s best days saw it sitting at around #430 in the App Store’s Photo & Video section, for example. For most of 2014, the app fell out of the rankings altogether, meaning that it was below rank #1,500.

The new app has now gone live on Google Play, but the iOS version is still nearly a year old at the time of Polaroid’s announcement. (Polaroid says the updated version is forthcoming. It’s possible the App Store’s holiday shutdown could have prevented it from being ready by the official launch date.) 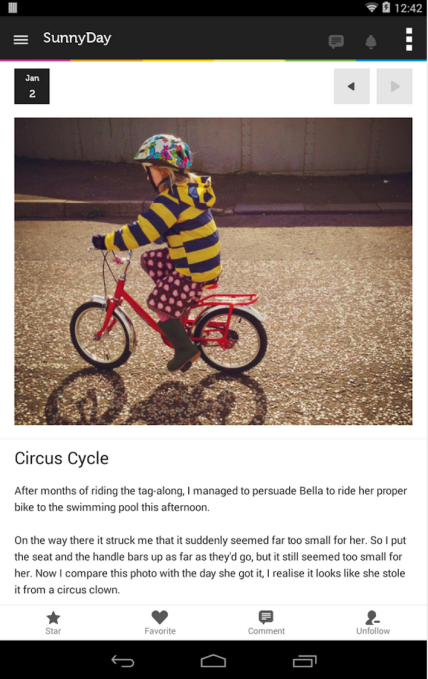 Photo journaling today is already a popular activity on mobile devices – in fact, one could argue that Instagram itself is a photo journal of sorts. But in Instagram’s case, it forces users to self-curate their massive photo collections by having them slow down to pick their favorites, take the time to edit and crop them, apply filters, and then share. Other apps like Momento, Heyday and Day One also compete in the photo journaling space, offering something that’s more akin to the digital version of a diary rather than something that’s strictly focused on photos.

Blipfoto’s idea to force self-curation through limitations on sharing may or may not click with users.

It’s an interesting concept, but it also works against the company’s ability to increase app engagement – if users can only post once per day, they simply won’t open the app as often. Most companies, on the other hand, are looking for ways to keep users coming back repeatedly for ever longer session times. While Blipfoto does offer views into “Popular” and “Nearby” photos to attract users at times when they can’t post themselves, it actually stops those who would otherwise want to use the app more from doing so.

This is not Polaroid’s first foray into partnering with photo-sharing apps. The company last year teamed up with indie developer Dana Shakiba on the Polamatic app. (It also has its own instant mobile app.) But its brand name has become so synonymous with instant photos that a search for “polaroid” in today’s App Store yields dozens of results. That could be a challenge for Polaroid, and, in part, could be why it’s now trying to advance its name recognition through partnership efforts where there’s already an established user base associated with an app.

Blipfoto is a free download on iOS and Android. (Some features will be made available to premium members.)