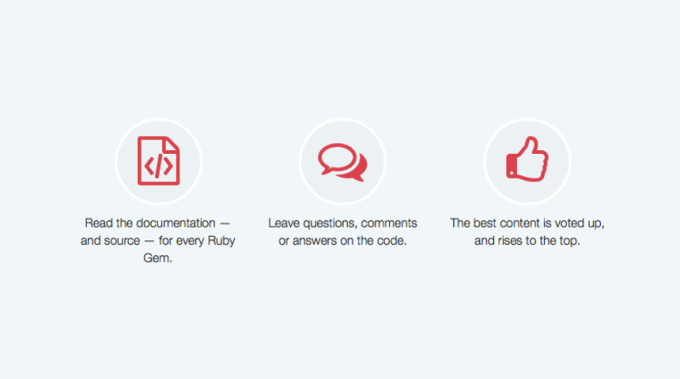 While the open source movement has made getting up and running with a software project incredibly easy for those who know what to look for, the reality is that not every project can be updated to support the latest versions of the code they’re built on.

Over time, this means that you see thousands of projects running on some old version of a library that seemingly no one is familiar with anymore.

Y Combinator-backed Omniref is building a code reference tool that could help developers get assistance from others building on the same code. Originally launched as a code search tool for Ruby in November 2013, the site has since added a Q/A feature resembling Genius’s annotation feature, as made famous by Rap Genius.

Omniref aims to include the source of every version of every Ruby Gem in its code library. When you create an account on the site, you can let Omniref look through the code you publicly host on GitHub to see what you’re working with.

The startup is using those two key features to build a platform showing relevant questions, news, and commentary on technologies relevant to their work, whether hobbyist or professional.

For now, the key feature built on that data is the question-and-answer feature. You can go to any version of any Gem, and ask a question related to the code in general or a specific portion you need to use. Those questions are presented to those whose projects also depend on that code.

As questions receive upvotes from developers who find them relevant, the most popular will show up when people check out a Gem they might use in a project. The most useful answers stick to the top, eventually making it a good source of things to watch out for in common use and therefore a way to show Gem maintainers things they may want to look at in future versions.

That’s why Omniref is currently reaching out to the maintainers of the largest Gems. If it can get support from key developers in the largest communities, usage will trickle down to the thousands signing up for mailing lists or in communities on Reddit, StackOverflow and elsewhere.

That will take time, so in the meantime co-founders Tim Robertson and Montana Low continue to add new features to the platform. In the near term, there’s a few obvious social essentials to add to profiles, like an About Me section. But there’s also a news feed in the works that will combine content from the site with blog posts and updates related to the code in your projects. Robertson hopes this will build up Omniref’s return traffic by making it a regular destination to get coding reference information but also news that keeps you up-to-date with how things are changing.

A bit further out, Robertson says they’re looking to make Omniref more useful for less experienced programmers. The Q/A feature the startup launched in August is useful if you know what you’re using and what’s going wrong with your implementation. But if you’re a beginner, you might not be using any outside code at all or not understand what’s broken.

Much in the same way that Genius now lets you annotate anything, one day you’ll likely be able to upload your code to Omniref and have pointers to exact issues that need fixing.